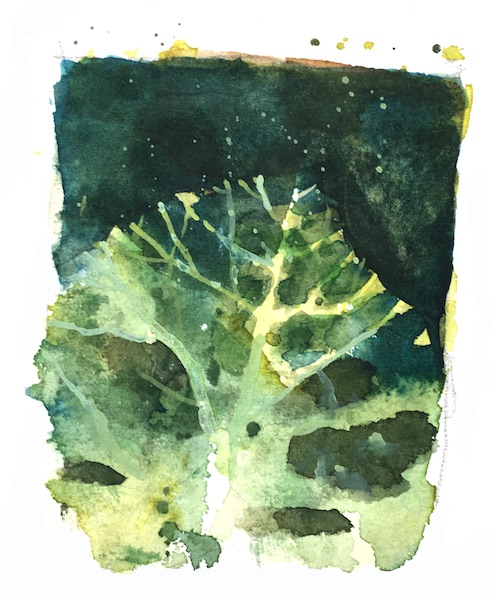 Some people plant their collards in rows
for a neat, predictable arrangement.
Others, however—and this is really
the old-fashioned method—plant
their collards in a jumble. They loosen
a little patch of ground and sling
the seed in a blur all over creation.
All over creation—allowing the mind
to contemplate a vastness is pleasing.
And who would argue with creation?
The result of the old-fashioned way
puts one in mind of a green sea
with a bluish haze above it like
a cloud. It looks like everything
that is is there, a waist-high
and leafy green eternity.
I like to lose my sense of order
in the green world. That’s what I call it.
The green world, it’s beautiful.
The distinction between the rows and jumble
is probably a metaphor.
A metaphor for what is the question,
but I’m going to sit on it a while,
give it a little time and see
if something illuminating comes
to mind. Or not. It’s strangely refreshing
when nothing illuminating happens.
You stand there in the green world
and it is what it is, nothing beyond
itself, silently existing.
Poetry is always surprising.
Naively I’ve approached it, thinking
some lofty thought to say, only
to discover silence says it all.
I’ve written of collard greens before
in a rather humorous little poem.
It’s a pretty inexhaustible subject,
no wonder I’ve returned to it
again, and find that having less
and less to say is where the real
poem on the matter is,
in the bluish haze above the green.
Nothing more to say than that,
but in it is a kind of love,
and poetry relies on love.