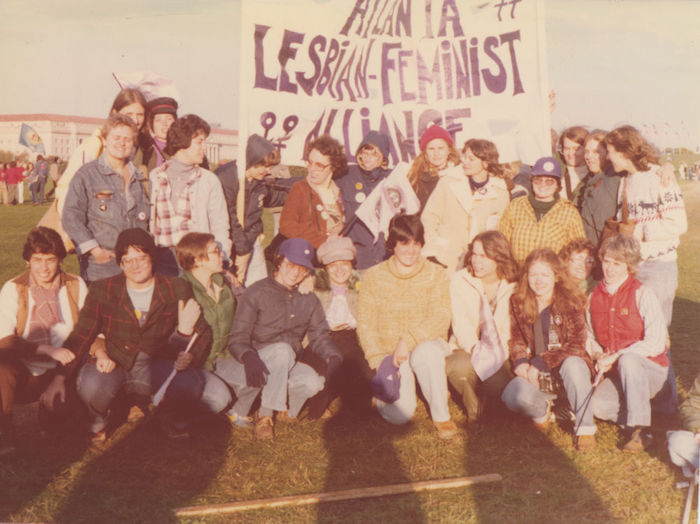 ALFA contingent at the National March on Washington for Lesbian & Gay Rights, 1979. Courtesy of Lorraine Fontana.

by Rachel Gelfand
Southern Cultures, Vol. 26, No. 3: The Women’s Issue

In the heat of an Atlanta summer evening, the alfa Omegas softball team took the field at Iverson Park. As an out-lesbian team organized by the Atlanta Lesbian Feminist Alliance (alfa), they were different from other softball lineups in the City League in 1974. The Omegas brought together alfa members at varying skill levels—neophytes and practiced athletes alike. At the mound was Lorraine Fontana, who had never pitched or played before that summer. At first base, Charlotte Harper: one of alfa’s two player-managers, a power hitter and leader on the diamond. She had been playing the game since her father cleared pine trees behind her South Carolina childhood home and built a baseball field for kids in her Black neighborhood. Lunging across second base was Vicki Gabriner, a self-described “skinny Jewish kid from Brooklyn” who shied away from sports. From the bleachers, excited teammates shouted out cheers: “Give me an A-A, give me an L-L, give me an F-F, give me an A-A! Whattaya got? Dykes, dykes, dykes!”