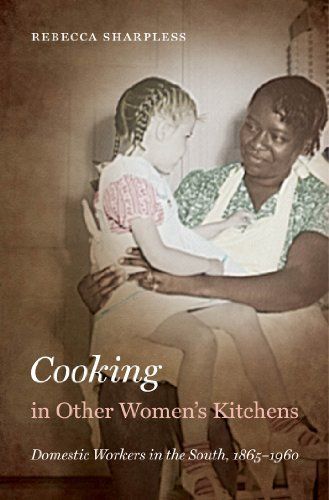 Cooking in Other Women's Kitchens by Rebecca Sharpless (UNC Press, 2010).

In her recent work Cooking in Other Women’s Kitchens: Domestic Workers in the South, 1865-1960, Rebecca Sharpless provides an intriguing account of the personal and public lives of African American domestic workers from Reconstruction to the beginning of the Civil Rights Movement. She traces how cooking and the other household jobs that accompanied it, including light cleaning, childcare, and shopping, became the main source of income for many black women after emancipation, and how this domestic work shaped both the interracial climate of the South as well as southern foodways and culinary culture. As Sharpless delineates, Cooking in Other Women’s Kitchens has three major foci: “to look at the way that African American women . . . used domestic work, particularly cooking, to bridge the old ways and the new, from slavery to employment of their own choosing”; “to discover how African American cooks successfully functioned within a world of extremely hard work, low wages, and omnipresent strife”; and “to refute the widespread popular stereotypes about African American cooks” (xi-xiii) such as the Mammy and Aunt Jemima tropes. Sharpless’s work expands the existing literature on African American women and domestic labor in all three areas; however, her most palpable contribution is the way in which she adds depth to existing studies in the field (Doris Witt’s Black Hunger, for example) by using interviews, letters, autobiographies, newspaper articles, manuscripts, and other archival material to trace the public and private lives of black female domestic workers. Moreover, Cooking in Other Women’s Kitchens augments additional studies, including Susan Tucker’s Telling Memories Among Southern Women and the Duke University oral history project Remembering Jim Crow: African Americans Tell about Life in the Segregated South, by placing these works into their historical and cultural contexts. It also provides a framework to the self-writing of former African American cooks, such as Cleora Butler and Idella Parker, who, in their own words, describe life as a southern domestic laborer during the first half of the twentieth century and the ways in which their occupation impacted their family and immediate environment.