The Desegregated Heart: A Virginian’s Stand in Time of Transition by Sarah Patton Boyle, with an introduction by Jennifer Ritterhouse (Review) 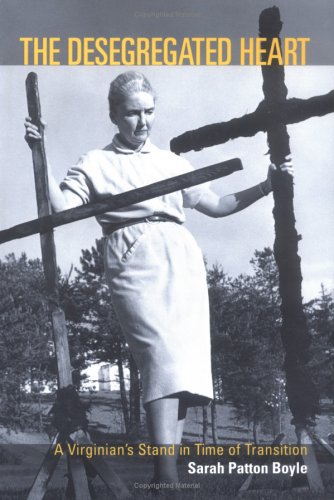 The Desegregated Heart, by Sarah Patton Boyle, with an introduction by Jennifer Rittenhouse (University of Virginia Press, 2001).

The Desegregated Heart: A Virginian’s Stand in Time of Transition by Sarah Patton Boyle, with an introduction by Jennifer Ritterhouse (Review)

In 1950 Sarah Patton Boyle was a typical, perhaps the quintessential, member of Virginia’s white elite, convinced that the first families of Virginia, to which she belonged, were composed of the nation’s finest and most noble. She was the descendant of English and Scottish nobility, of men who had fought in the American Revolution and served the Confederacy under Stonewall Jackson. She was the daughter of an official in the Episcopal Church and the wife of a faculty member of the University of Virginia. She endured, or believed herself to endure, as all members of her class should, “honorable poverty,” the result of defeat in the War Between the States. She was steeped in the myth of the Lost Cause, and firmly convinced that she loved “Negroes”–and that they loved her and all members of her class, because they were the Negroes’ best friends. She was, in short, a white southern true believer, but with a twist.