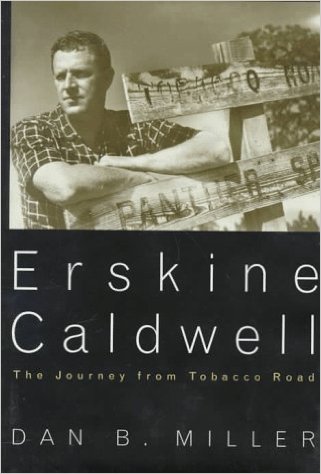 Erskine Caldwell: The Journey from Tobacco Road by Dan B. Miller (Alfred A. Knopf, 1995)

Last year, I assigned Erskine Caldwell’s Tobacco Road to my upper-level twentieth-century U.S. history class. On the first day of the quarter, as the students scanned the syllabus, one of them asked, “Who is this Erskine Caldwell guy?” I answered with a question, “Have any of you heard of Erskine Caldwell?” Only one woman out of the thirty or so in the class—most of them from Caldwell’s native Georgia—raised her hand. She said she thought that he wrote “dirty, crude” books. I informed the class that Caldwell was one of the most popular writers in American history, and that in the 1960s he was dubbed “The World’s Best-Selling Novelist.” I told them that a stage version of Tobacco Road was the second longest running Broadway drama of all time. Just as I was about to rattle off another Caldwell fact, one of the students interrupted me and demanded, “Well, if he’s so popular, why don’t we know anything about him?”