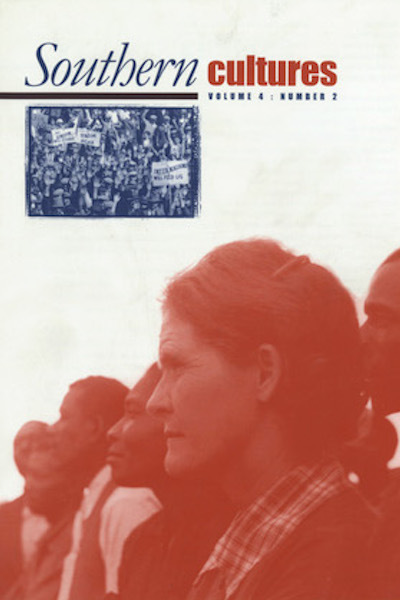 Sharecropper Myrtle Lawrence and the Southern Tenant Farmer’s Union. Scottish heritage, southern style. Southern food, German style. The Sally Hemmings story. Why Appalachians are mountains and a people. Songs of the Gastonia Textile Strike. Soul food. And history, privilege, and forgetting in the next generation of students. Dig in to Summer 1998!

The Lady Was a Sharecropper: Myrtle Lawrence and the Southern Tenant Farmers’ Union

"How one woman transcended regional and gender stereotypes in her pursuit of justice for tenant farmers, black and white."

"Scottish and southern heritages meld into a new kind of southern identity, one founded on lost causes but refashioned for today's South."

"Did the 'truth' about the president's affair with a slave woman matter to his contemporaries? The answer may surprise you."

The Great Wagon Road, or How History Knocked the Professor Cold, or A Storyteller’s Story, or Why Appalachians Are Mountains and a People

A boy of four, he killed one of the King's overlords for casting a desirous eye on his mother, and stowed away to sail the whale road.

The Power of the Porch: The Storyteller’s Craft in Zora Neale Hurston, Gloria Naylor, and Randall Kenan by Trudier Harris (Review)

John Stuart and the Struggle for Empire on the Southern Frontier by J. Russell Snapp (Review)

Tokens of Affection: The Letters of a Planter’s Daughter in the Old South Edited by Carol Bleser (Review)

The South as an American Problem Edited by Larry J. Griffin and Don H. Doyle (Review)

The University of Tennessee Press, 1996

The University of Alabama Press, 1996

"…southerners can be distinguished by what goes into their mouths and what comes out of them."

Because Germans have been in the South for over 250 years, they have blended more completely into southern culture than, say, Germans in Pittsburgh or Detroit.

Although songs of social protest had deep roots in the American South, the Gastonia strike marked one of the first labor conflicts in the region that produced a large repertoire of protest songs written specifically for the occasion.

How I Spent My Summer Vacation

My students last summer had never heard of Jim Crow.