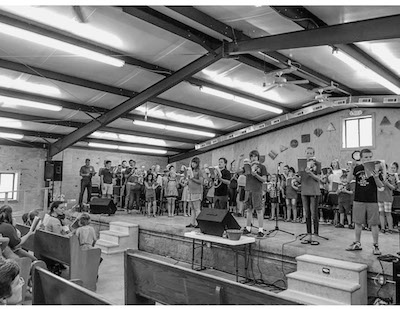 “The singing school may not have been a southern creation, but its proliferation in the post–Civil War years was largely a phenomenon of the South. Its survival, and revival, in the twenty-first century is almost exclusively a southern story.”

He looks like he should be in pads and a helmet, protecting a quarterback on some manicured Southeastern Conference field. But his massive hands and fingers frolic along the keyboard with the dexterity and unpredictability of mice in a late winter hayloft. He sits grinning through a goatee at the main piano, romping away at a tune he had never seen before yesterday, a new melody branded with the echoes of jangling strokes on pine walls and sunburned voices in two-door meeting houses. Twenty feet away, perched formally atop the second piano’s bench like a downy owl peeking from his nest, a wisp of a boy accompanies his massive partner. The lad’s eyes burn a hole in the songbook. His petite hands move effortlessly across the keys—a waterbug on a summer eddy. No wasted movements, no change of expression on his face. Two masterful musicians, bound to be ignored.