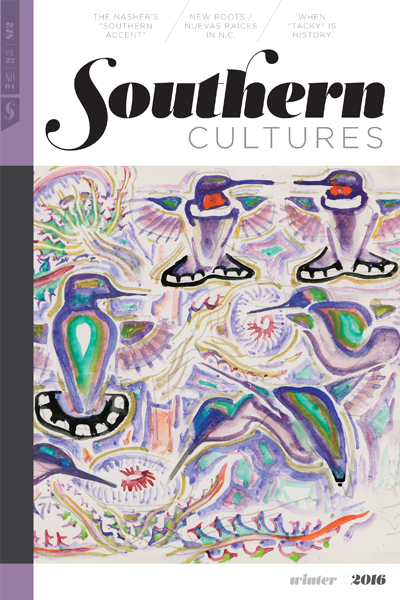 “It’s true that many of the “peculiar institutions” that once made the South indisputably distinctive are gone or fading, though whether this will efface southern identity or merely change it remains unsettled.”

Sundays in the Streets

"It began early and grew fast, this romance between New Orleans and parades."

“‘That night, they blew up King’s motel, and every police car they had in Birmingham got torn up. I left. I didn’t have anything in common with Bull Connor.’”

"Southern Accent: Seeking the American South in Contemporary Art" was co-curated by Trevor Schoonmaker (Nasher Museum of Art) and Miranda Lash (Speed Art Museum). Before the show opened in September, we sat down with Schoonmaker and artists Stacy Lynn Waddell and Jeff Whetstone, both featured in the exhibition.

“I passed the sign frequently and always noticed its beautiful lettering. Finally, I stopped and photographed it, thankfully, because the sign is now gone.”

"In the modern and postmodern worlds mass-produced artifacts reflect something of southern pleasures, aspirations, and humor."

What Kind of Cobb Are You?: Class, Wealth, and Power in the Real and Remembered South

“After years of putting up with this genealogical equivalent of the third degree, I finally decided to explore the distinct experiences of these two strands of a single white family, which, despite their relative physical proximity, often seemed to exist in two different, albeit intersecting, worlds.”

“The singing school may not have been a southern creation, but its proliferation in the post–Civil War years was largely a phenomenon of the South. Its survival, and revival, in the twenty-first century is almost exclusively a southern story.”

“I am in Jamaica because Frank wanted his ashes scattered here; he wanted to come home.”

“How did They reach us so easily back in the day, on playgrounds, in convenience stores, at skate shops?

Meet the Southern Oral History Program, our colleagues at the Center for the Study of the American South, UNC-Chapel Hill.

The King of the Birds

We talked with illustrator (and frequent Southern Cultures contributor) Natalie Nelson + author Acree Macam about their new children's book, The King of the Birds. (Illustrations by Natalie Nelson, courtesy the authors.)