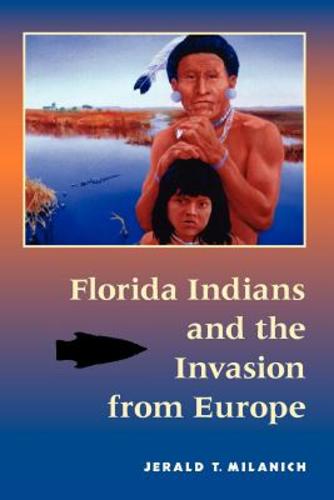 Florida Indians and the Invasion from Europe by Jerald T. Milanich (University Press of Florida, 1995)

Jerald Milanich, curator of archaeology at the Florida Museum of Natural History, is the editor or author of twelve books on the early history of Florida, most recently, three hefty volumes: Hernando de Soto and the Indians of Florida (with Charles Hudson, 1993), Archaeology of Precolumbian Florida (1994), summarizing twelve thousand years of human habitation in Florida before the arrival of the Europeans, and the book under review, Florida Indians and the Invasion from Europe, which continues the story another three hundred years. Clearly organized and admirably balanced in coverage, the volume offers a much needed synthesis of the growing archaeological literature on Spanish Florida, which, thanks to Milanich and other Florida archaeologists, has been generating more studies than the entire Caribbean, a field to which many of the same scholars make a significant contribution. The first two chapters are introductory. Chapter One discusses the documentary and archaeological sources; the second chapter condenses and, for the nonspecialist, gratifyingly clarifies the information on pre-Columbian archaeology to be found in the companion volume. The rest of the book is divided into three parts of three chapters each. In the first section, the author describes the various Florida Indian groups at the time of contact, locating them on the modern landscape and correlating them with earlier cultures wherever archaeological and historical information permits. This is not, however, a work of reference with “mini-ethnographies,” and the reader in pursuit of a particular group will find that it reappears throughout. The second part introduces the Florida explorers, ending with Pedro Menéndez de Avilés and the founding of St. Augustine in 1565. The last section describes the mission system and its destruction in the early 1700s by Creek and Yamasee allies of English Carolina. The epilogue is devoted to the Seminoles, who entered the peninsula just before the European settlers in the eighteenth and early nineteenth centuries and were, for them, the Florida Indians.