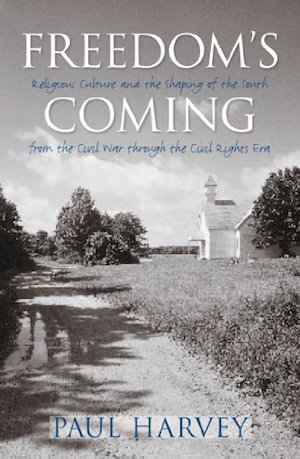 If you think you understand how religion and race work in the South, then obviously no one has explained it to you properly. Lillian Smith tried to explain it in her 1949 Killers of the Dream: “We were taught . . . to love God, to love our white skin, and to believe in the sanctity of both.” But it was more complicated than that, she admitted. “No wonder that God and Negroes and Jesus and sin and salvation are baled up together in southern children’s minds and in many an old textile magnate’s too.” I suspect that quotes like these find their way into Paul Harvey’s most recent book, Freedom’s Coming, because he, too, recognizes the difficulty of making sense of how evangelicalism could mean so much to such different southerners as klansmen, populists, and civil rights activists.