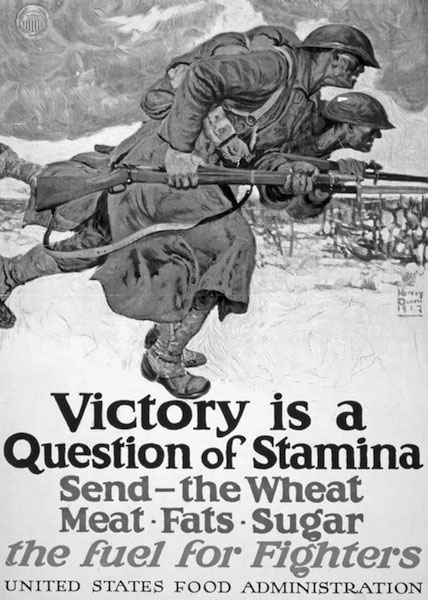 U.S. Food Administration World War I poster, courtesy of the Collections of the Library of Congress.

"Wash your hands, tuck in your napkin, and read your fill."

Southern food is big news these days. In the past year or so, the New York Times has printed major features lauding recovered southern food traditions based on heritage seeds and breeds, celebrity chefs, and the national rage for locally grown food, artfully prepared. Every neighborhood you visit now boasts its own farmer’s market and community garden, each specializing in the freshest organic produce, straight from the nearest earth. In Atlanta, the New South’s famously practical capital, Your Dekalb Farmers Market calls itself “A World Market” and dedicates itself to a well-fed planet with infinite food variety and sustainable international agriculture. The webpage of the South Carolina Department of Agriculture features a list of 347 state eateries purveying locally grown foods, from Charleston’s finest to the lunchrooms of the Anderson School District Number 5. Far beyond the famous shrines of Charleston and New Orleans, moreover, cities like Nashville and Birmingham boast about the local ingredients that appear in the updated versions of southern classics offered by their best restaurants. The American food revolution launched by trailblazers like Julia Child has shifted from imported tastes to updated American classics or to new combinations of traditional offerings. Nowhere is this plainer than the modern South, where the locavore movement is in full swing, evolving as it gathers speed and promising succulent benefits to every table, from the simple to the sumptuous.