The Ford Campaign and the Challenge of Jimmy Carter's Southernness 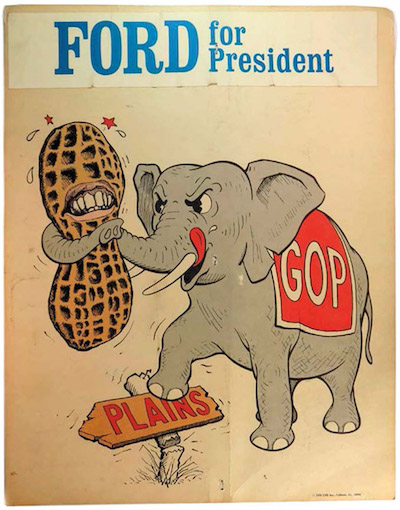 The Ford Campaign and the Challenge of Jimmy Carter's Southernness

“With much on the line—but virtually nothing to lose—Ford undertook a halting, intermittently bold, and ultimately ill-fated campaign to undermine Carter’s regional credibility.”

America’s bicentennial was supposed to be a year of triumphant celebration. Although the nation could look back proudly on its founding, the present looked grim. Americans, after all, were still reeling from the Watergate scandal and Richard Nixon’s subsequent resignation from the presidency, and many were feeling beaten down by a dilapidated economy beset by the confusing problem of stagflation—high unemployment, high inflation, and weak consumer demand. 1976 was also an election year. Running as the incumbent, Nixon’s replacement and pardoner, Gerald Ford, presented himself as a steady hand: not flashy, but competent, and capable of leading Americans out of their economic funk—at some point. His challenger, Democrat Jimmy Carter, suggested he would do more than offer competent leadership, regain Americans’ trust, and fix the economy. He would also usher the nation out of its existential doldrums, and perhaps even move it beyond the racial and political divisions of the ’60s. He would, in short, heal its wounds. These were bold claims made all the more remarkable by Carter’s assertion that his southern background empowered him to cure the nation’s ills.