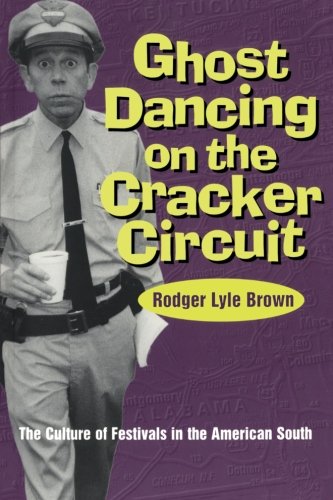 Ghost Dancing on the Cracker Circuit: The Culture of Festivals in the American South by Rodger Lyle Brown (University Press of Mississippi, 1997)

Twenty years ago, Craig Raine started a fad for poems about ordinary things as if seen by an extraterrestrial, as in: “A Martian Sends a Postcard Home”:

Model T is a room with the lock inside-

key is turned to free the world

for movement, so quick there is a film

to watch for anything missed.

Such re-seeing of an ignition switch and rearview mirror was clever enough for an English poet, but the trick had already been done earlier and better by an American comedian, Andy Griffith, who burst on the scene in the 1950s as an alien of sorts- from Mars or Mount Airy or is acoustic cousin Mayberry- reporting on two performances as though he did not know their codes or conventions, so that a football game and Romeo and Juliet gained new dimensions, represented not as a sport and a play but as actual events. It’s all like Amelia Bedelia, in children’s stories, who interprets everything literally, so that, if told to bake a sponge cake- well, you get the idea.