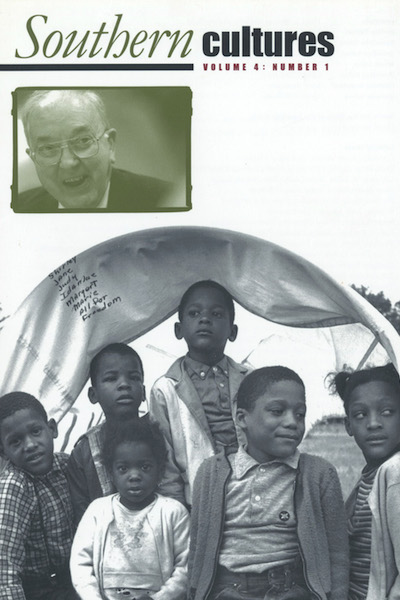 Spring 1998 brings our first Politics special issue, featuring: Tony Horowitz on “Black Confederates.” Confronting the new Republican South. South Carolina’s Republican presidential primary. The 25-year paradox of Jim Hunt and Jesse Helms in North Carolina. Following the money in Alabama. Tracking the high cost of gubernatorial campaigns over the previous twenty years. The challenge of translating southern womanhood into elected office. Reflections on redistricting. The SCLC’s Poor People’s Campaign of 1968 in photos. Presidential campaign songs of 1844. And a reflection on the Store Lunch.

For many of us, the process of self-government has become so dispiriting that politics itself has become a term of reproach, and aspirants to public office outdo one another in denunciations of the government they wish to join.

The Black and the Gray: An Interview with Tony Horwitz

Proponents of black Confederates can claim p.c. motives—recognizing the wartime South's diversity—while advancing what, for many, is an un-p.c. message: namely, that if blacks supported the Cause, it couldn't have been so bad.

Introduction: The Culture of Southern Politics

"If truth be known, many southern Republicans are pinching themselves as the 1998 election approaches, amazed at and wondering about the extent of their success."

“The Dread Handwriting Is on the Wall”: Confronting the New Republican South

"Caution in predicting the southern political weather might seem to be in order."

Between a Rock and a Hard Place: South Carolina’s Republican Presidential Primary

"They were Republicans under the skin, but they could not join a party indentified with the destruction of the South."

"How is it that a state with a reputation for moderation, even progressivism, elects Jesse Helms?"

"Alabama politics is not about Democrats and Republicans; it's about plaintiff lawyers and big business."

"Southern women still achieve firsts that have long been secured by women in other regions."

"The first thing we've got to do is use political campaigns again as the way to establish dialogue and a way to paint a view or a vision of where we ought to be."

"Reminiscences and a gallery of photos documenting an unfinished journey that began thirty years ago."

Reading, Writing, and Race: The Desegregation of the Charlotte Schools by Davison M. Douglas (Review)

by Robert A. Pratt

Slavery and the American West: The Eclipse of Manifest Destiny and the Coming of the Civil War by Michael A. Morrison (Review)

Mothers of Invention: Women of the Slaveholding South in the American Civil War by Drew Gilpin Faust (Review)

Rhapsodies in Black: Art of the Harlem Renaissance, An Exhibition at the Corcoran Gallery of Art in Washington

“He Put His Thumb Up to His Nose, And Twirl’d His Fingers at His Foes”: Presidential Campaign Songs in 1844

"Local party organizers were undoubtedly embarassed when the pole fractured and had to be sent to the local blacksmith's shop for swift repairs."

"Throughout the rural South, men with regular business in the country -- hunters, fishermen, farmers, surveyors, and traveling agents of various trades -- traditionally enjoy a repast known as the Store Lunch."