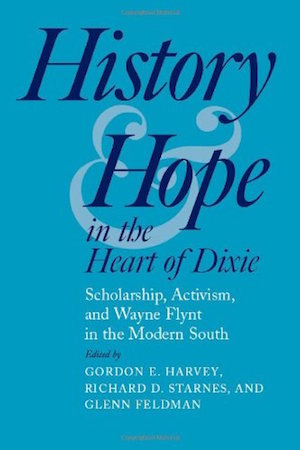 History and Hope in the Heart of Dixie edited by Gordon Harvey, Richard Starnes, and Glenn Feldman (University of Alabama Press, 2006)

In 2006 Wayne Flynt retired from Auburn University after teaching history for more than forty years. Born in Pontotoc, Mississippi, Flynt grew up in rural and small-town Alabama. By the time he graduated from Howard College (now Samford University) in Birmingham in 1961, he was an ordained Baptist minister, had served as student body president, and had coordinated southern college students for Richard Nixon in 1960. Already a critic of segregation, Flynt rejected a career as a southern minister for graduate study in history at Florida State University. After a decade teaching at Howard College, he moved in 1977 to Auburn. In addition to teaching thousands of undergraduates, he directed more than forty doctoral dissertations. His historical scholarship in more than a dozen books deals with southern politics, religion, and poverty, often focused on Alabama, and has earned many prizes, including the 1990 Lillian Smith Award for non-fiction. He also won teaching awards, served as department chairman, and was a Distinguished University Professor.