One of the first words I learned here was “Yankee.” In 1964 we moved from Binghamton, New York, to North Hills [Raleigh, North Carolina], which was really a neighborhood built for Yankees. The Carolina Country Club wouldn’t allow Yankees. The Raleigh Country Club would. So we were segregated. In my Cub Scout troop there was a brawl, and it was Yankees versus Rebels. My mother [once] went to the grocery store, and she was at the Winn Dixie talking to another northerner, and the woman in front of her turned around and said, “I just wish y’all would go back where you came from. I can’t even get a girl to come clean my house for a dollar a week anymore.” It was a real “us and them” sort of situation from the very beginning. Once you opened your mouth, it was clear that you didn’t belong here. That was a time when local television and radio people had accents. I remember in the third grade a teacher asked a question and I said, “Yes.” The teacher said, “Yes, what?” I didn’t know what she expected, and she said, “Yes, ma’am.” I went home and my mother said, “No one, no one is going to make you call them ma’am.” So I was against this place. I was just against it if they were going to talk to my mom that way. I was pretty against North Carolina.

I remember in the third grade a teacher asked a question and I said, “Yes.” The teacher said, “Yes, what?” I didn’t know what she expected, and she said, “Yes, ma’am.”

That said, at the same time I felt like I was benefiting from it. I remember there was this woman who was sent by the Arts Council to our school. She just didn’t belong anywhere. She was one of those loud women and she had big glasses and she was dressed like none of our mothers. She said, “This would be a nice painting, but you’d go baroque trying to pay for it.” She was just really dynamic and entertaining and made me see those paintings in a completely different way. [She] really stirred that pot for the very first time and she was sent by the Arts Council to make that happen.

It doesn’t always work but sometimes, wow, it sure does. When I was in high school, [the actor] Ira David Wood was sent to turn us on to miming. He came to our high school and I signed right on up and next thing you knew I was in Dorton Arena on the State Fairgrounds pretending to have just gone down in a plane crash. The EMT people needed volunteers to act like they’d just been in a plane crash and to have rubber scabs on our heads and wander around dazed. Sign me up. It was just great, and that led me to the drama club, and that led me to writing a play and having Lincoln Center produce it. I don’t know [if] that would’ve happened if Ira David Wood hadn’t come to our school. I was just enchanted by it. 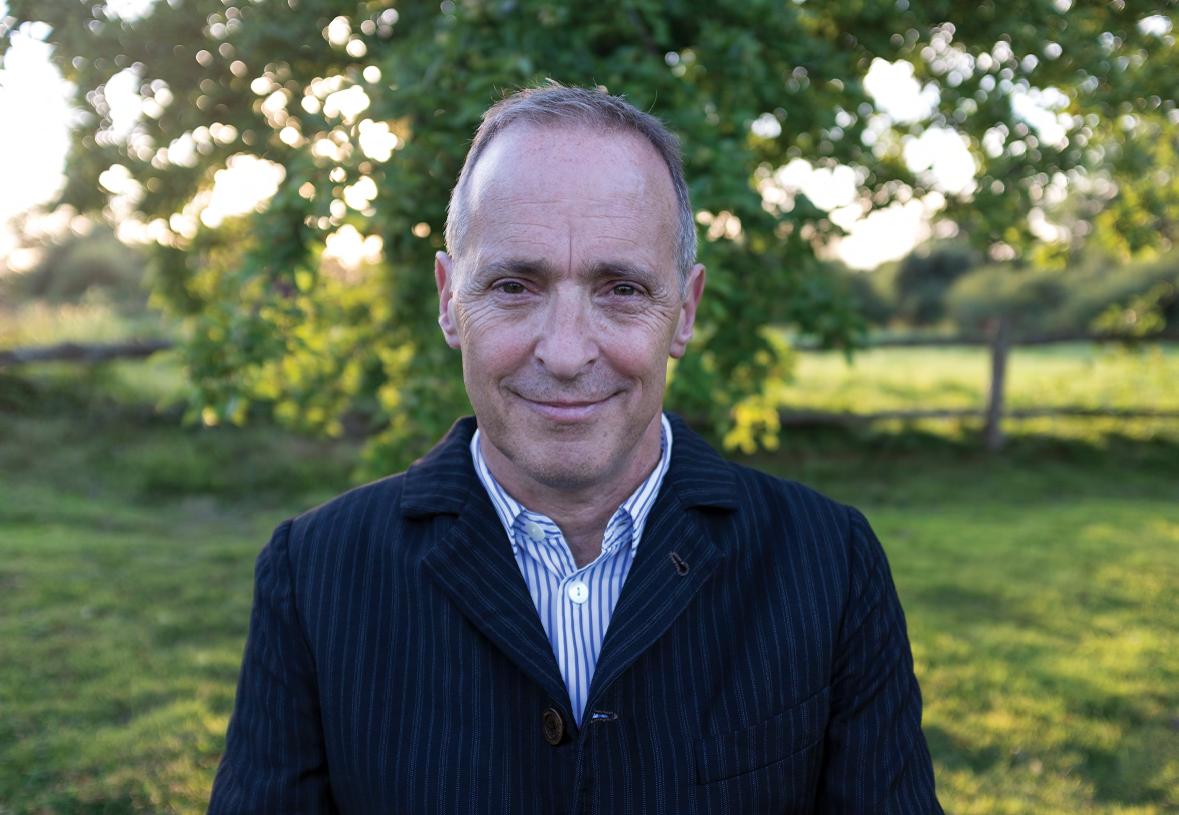 It felt like there was a real art scene going on in Raleigh, and I met a bunch of people here. We started doing these performance pieces. We did this big performance piece in what was an abandoned tobacco warehouse. It probably is a loft now or it’s a place where people are making artisanal cotton candy or something, but back then it was just like a run-down building. The Art Museum would have the biennial North Carolina show, and I had a couple things that were accepted into it. Then SECCA [the Southeastern Center for Contemporary Art] invited me to a show. And those Wake County shows, I would always enter in those. I don’t know if it was my age but it felt really vibrant at the time.

I just know what an impact those people who came to our schools made. The woman who came to talk to us about art. Wow. She was really just a dynamic person who didn’t remind me of anybody. As you get older then you see, “Oh, it’s the museum person with the dramatic glasses.” But when you’re a kid, she might as well have come from another country. It meant a lot to have things like the Wake County Artist Show and the North Carolina Biennial. Opportunities when you were a little bit older to show things. When you’re in school and you’ve got somebody asking, Where’s that painting? Where’s that sculpture? Where’s that short story?, it’s not that hard. But when you get out of school and all of a sudden there’s nobody asking for it, you’re just in this void and you feel so hopeless. To have outlets like that . . . even if you don’t get in, you still look toward it. You’ll try again next year, [and] you’ll try again next year. That meant a lot, too.

As you get older then you see, “Oh, it’s the museum person with the dramatic glasses.” But when you’re a kid, she might as well have come from another country.

I remember going to Duke, and I heard Eudora Welty read. She came out with a wreath on her head that had electric lights on it. And the North Carolina Dance Festival—I used to go to that. That made a big impact on me. I would look around, and I would realize, “Okay, not everybody’s here.” There were more people at the football game than are here, but I felt like I was in a room with the right people. It was finding a community. It’s that way you feel when you find your people, and you look around, and you think, “Oh my God, where have you been? I don’t feel so alone now.” That’s what the museum shows did, and the Wake County show, and Eudora Welty reading, and putting on a performance piece, and going to Theatre in the Park, and watching a play. It all made you feel like, “Oh, it’s not just me. There are all these other people.” It’s not 90 percent of the people. It’s not even 20 percent of the people. But it’s the right people.

I left North Carolina in 1984. I moved to Chicago to go to the Art Institute. I got to art school and I realized that the other people had something that I didn’t. I wasn’t sad about it. I was just like, “Well, you’ve got to admit it.” I felt bad for the people who couldn’t admit it. If someone’s on fire with something and you’re not, nothing is going to happen for you unless you’re on fire. You can lie about it all you want, but those are the people who bolt out of bed every morning and get to work. It doesn’t matter if they ever make a name for themselves. They’ve still got something that you don’t have. But, I had it for writing so it just sort of shifted to that.

Now I live in England. When I think back, there were so many things that now I think of as beautiful North Carolina things that were crushed and stomped out by the invading Yankees. I remember being in line at the K-Mart in Raleigh [after] I had moved to Chicago. I was with my dad. The line was not moving. Then we finally get up there. The cashier asks this woman for her I.D. because she’s writing a check. The cashier looks at the I.D. and says, “You know, I think I like your hair a lot better now. It brings out the shape of your face.” I thought, That is why we have been in this line all this time because the cashier is talking to people about what their hair looks like in the I.D. picture. That’s so beautiful. There’s something so beautiful about that to me, just the way people would talk here and how easy it was to get them talking. It’s not that people wouldn’t talk in Illinois, but there wasn’t that same music to it. For a lot of the time that I lived here, I just didn’t want it because it wasn’t where I was from, and North Carolina didn’t seem to want me. I was like, “Okay, I’m just going to not want you back.” I was here from the time I was in third grade pretty much until I was 27 years old. Now, I wish I had had an accent. I think it sounds fantastic, but it would just be phony for me to put one on.

I thought, That is why we have been in this line all this time because the cashier is talking to people about what their hair looks like in the I.D. picture. That’s so beautiful.

Recently, I’ve been going back to Binghamton, New York, which is where I’m from. Nothing has changed in Binghamton. Nothing. There was a mom-and-pop shop down the street from my aunt’s house. My aunt’s house is still there. That little mom-and-pop shop is still there. I actually feel more connected there than I do here. I feel like I belong there more than I belong here. I think there was just something about here that it wouldn’t matter how hard I tried, I wouldn’t really count. I wouldn’t really be a member of that club. I realize when I come down here that I still feel that way. Somebody wrote an article in the newspaper in Emerald Isle. I had bought a house there. Some guy wrote in and said that “there were enough Yankee dingbatters in the area already.” And I thought, “Really? Still?” I mean, I’m 60, and I came down here in the third grade, but I’m still a Yankee dingbatter? You’re either of that place or you’re not, but I’m not complaining about that. I’m comfortable in that role. There’s a lot of things I like about it. Nothing is my fault. When you’re in the outsiders you’re like, “Not my fault. I didn’t have anything to do with it.”