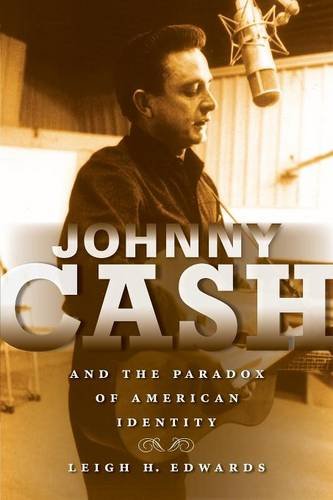 The mythology surrounding Johnny Cash includes two widely disseminated opinions. The first is that Cash is a walking contradiction in just about every aspect of his life, career, music, and reputation. The second is that Cash embodies the essence of American character and culture, summoning claims that he is an American hero whose face “ought to be up on Mount Rushmore,” as fellow singer Kris Kristofferson asserted, and drawing out comparisons with Abraham Lincoln, Walt Whitman, and Ralph Waldo Emerson. In Johnny Cash and the Paradox of American Identity, American studies specialist and English professor Leigh Edwards takes as her starting point these two opinions and endeavors to explain the powerful allure of these images of Cash. His widespread appeal and substantive role within American popular culture, she asserts, arise from the irresolvable contradictions within his identity, which are, in fact, the “foundational contradictions” (2) of American identity. Thus, Cash’s magnetism is that he leads us to engage, in essence, with ourselves.