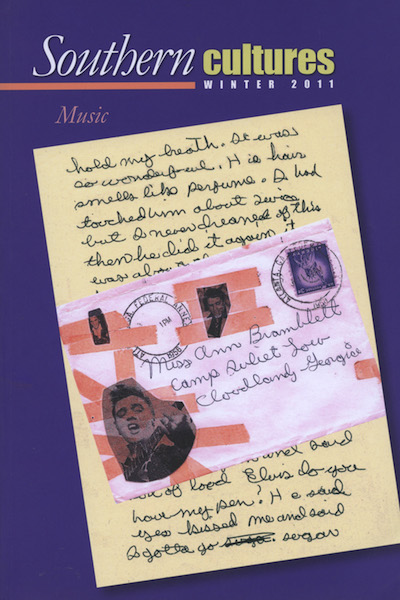 Tune In! This special music issue features stories of corrupt radio practices in Jacksonville, Florida; backstage antics with the Carolina Chocolate Drops, Tift Merritt, the Avett Brothers, and more; “Redneck Woman” and class rebellion via Gretchen Wilson; an encounter with Elvis; a conversation with Bobby Rush; and more.

"We've all seen the pictures of Elvis Presley before a mass of screaming girls. And we've all heard Elvis, but have we ever heard from one of the girls?"

"'Kickbacks from government vendors, jobs for cronies, sweetheart deals for contractors' were commonplace—'It may have been the most corrupt city in America.'"

"The headlining band were nasty rogues, hitting on freakishly skinny underage chicks while I heard it all half asleep."

“Redneck Woman” and the Gendered Poetics of Class Rebellion

"In 2004 Gretchen Wilson exploded onto the country music scene with 'Redneck Woman.' The blockbuster single led to the early release of her first CD and propelled it to triple platinum sales."

"Record selling certainly had its glamorous moments; retailers could regale younger customers with stories of nightlife and even rubbing elbows with famous musicians and celebrities."

"Nixon's visit (only five months before his resignation) was seen by national journalists and politicos to be a trip to one of the few places where he would still receive a warm reception, and it was quite warm indeed. Nixon took the stage, played two songs on the piano, and bantered with Roy Acuff."

Poem with a Refrain from Charley Patton

The KISS Letter: An Encounter with Elvis

"The last time I kissed him he only had on half a shirt. He has a wonderful chest. I am really crazy about him now + have the funniest feeling in me, all over."

Loving, Leaving, Liquor, and the Lord: Songs in the Southern Vernacular