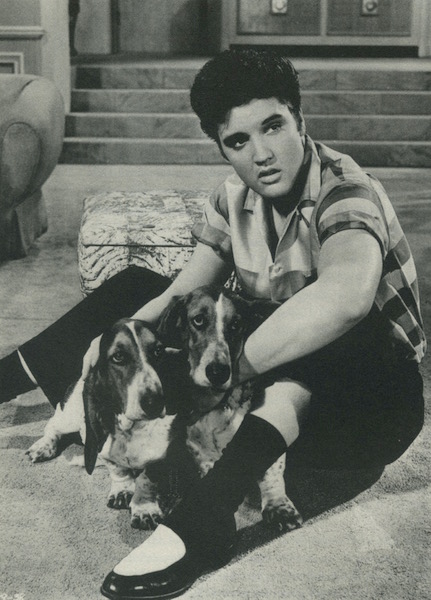 From Jailhouse Rock, an M-G-M production, courtesy of the Museum of Modern Art Film Stills Archive.

"Presley faced criticism from ministers about his lewd performances."

In December 1956 Elvis Presley dropped in at Sun Studios in Memphis, just as a Carl Perkins recording session was ending. Presley was now a national star, having transcended earlier that year his previous status as a regional rockabilly performer. That special day became known as the Million Dollar Session because of the supposed “million dollars” worth of talent that included Presley, Perkins, Jerry Lee Lewis, and, briefly, Johnny Cash. An open microphone recorded a lively jam session. For the student of southern religious music, it was an especially revealing moment. In addition to improvising with country, blues, and early rock songs, the group sang from the common body of southern religious songs, some of them gospel tunes that dated from nineteenth-century revivals, others African American spirituals, others popular gospel-quartet numbers. All of these young performers who had grown up in the countryside near Memphis knew the songs, and when one started singing, the others easily fell into supporting lines. They had all come out of church backgrounds and would have been familiar with “Farther Along,” “When God Dips His Love in My Heart,” “Blessed Jesus (Hold My Hand),” and “As We Travel Along on the Jericho Road.” Elvis sang “Peace in the Valley,” an old classic written by black composer Thomas A. Dorsey and the song he sang on the “Ed Sullivan Show” to defuse public concerns that he was an immoral renegade destroying America’s youth. Between songs the boys talked about the white gospel quartets that were so active around Memphis, an epicenter of white and black gospel traditions.