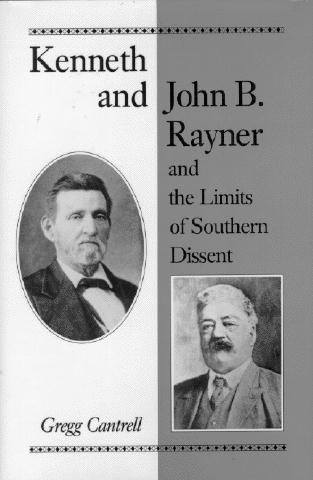 Kenneth and John B. Rayner and the Limits of Southern Dissent by Gregg Cantrell (University of Illinois Press, 1993)

The content of this well-researched book is not exactly what many readers will expect. Kenneth Rayner, a prominent and well-connected North Carolina politician in the middle decades of the nineteenth century, fathered an illegitimate son by one of his slaves in 1850. That child, John B. Rayner, became prominent among Texas Populists in the 1890s. Both the title and dust jacket suggest that this book will explore the links between the two men and use their lives to study the southern social system and the amount of dissent it tolerated. Despite Cantrell’s attempt to give attention to these subjects, the book remains a more nanow and conventional political history of two separate individuals, who apparently had few, if any, ties between them aside from their genes.