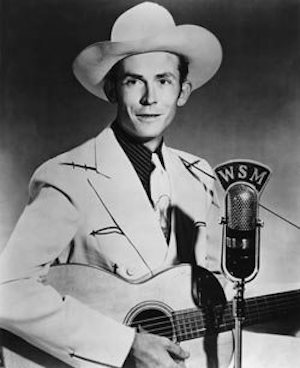 "They stopped at a gas station in Andalusia, Alabama, and found a justice of the peace who had a Bible and the right forms to fill out and on top of that was sober."

Hiram “Hank” Williams was born on a tenant farm in Mt. Olive, Alabama, in 1923. His daddy Lon was a Great War veteran—he owned a store, grew berries, engineered on a timber train. He went into a veterans hospital when Hank was just six, and he never came out. Lillie, Hank’s mother, kept Hank by her on the seat of the church organ she played. Lillie pumped the wheezing, breathing bellows and the foursquare fundamentalist hymns poured forth and Hank learned music.