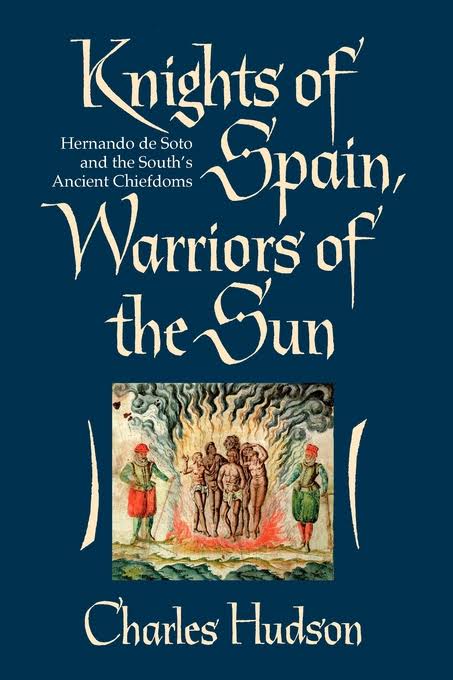 Knights of Spain, Warriors of the Sun: Hernando de Soto and the South's Ancient Chiefdoms by Charles Hudson (University of Georgia Press, 1997)

In 1847 while debate over the controversial War with Mexico raged in Congress, the decoration of Charles Bulfinch’s U.S. Capitol Building was nearing completion. John Trumbull’s four epic scenes of the revolutionary era had graced one side of the massive Rotunda for several decades, and three paintings featuring Columbus, Pocahontas, and the Pilgrims had recently been added. At last a congressional committee, attentive to sectional divisions, selected an Ohio artist to depict a Deep South scene with implications for westward expansion: William H. Powell would portray the Discovery of the Mississippi by De Soto, A.D. 1541. The finished painting showed the Spanish explorer on a white horse, flanked by a heavy cannon and a massive cross, accepting the submission of feathered Indians huddled before western-style teepees. By the time Powell’s symbolic image of De Soto was finally installed in 1854, the self-made adventurer was becoming a permanent feature in the American pantheon of Christian explorers/founders.