Core Sound is a shallow body of water in eastern North Carolina that carries the Core Sound National Seashore on its eastern shoulder and the Carteret County peninsula on its west. Between Beaufort, the mainland town that has prettied itself up over recent decades, and Cedar Island, a jumping-off point by ferry for the tourist destination of Ocracoke, a handful of small fishing villages comprise the area locally known as “Down East.”

For more than two centuries the people of Core Sound have lived off the bounty of the Sound and the sea. To negotiate Core Sound’s notorious shoals and exploit its rich fisheries, they built shallow-draft vessels—versatile and adaptable boats that could be converted from haul boat to run boat and back again. In recent decades these boats could long-haul for trout from spring to fall, trawl for shrimp in summer, and kick clams or oysters in winter. 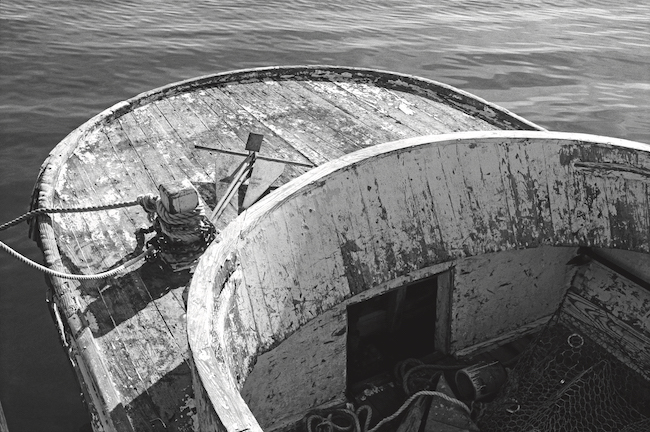 "Linda (detail), 2005." The rounded sterns of Core Sound boats, designed to enable fishermen to haul their nets in without getting snagged on corners, are fairly typical of the region. 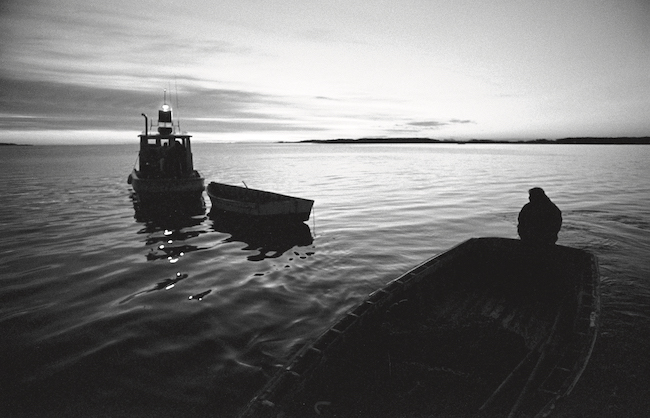 "Early Morning Haul," 2006. Boats engaged in the long-haul fishery (also called the haul-net fishery) often leave the docks by 3:30 a.m., sometimes even earlier. This fishery involves two haul boats towing a 1,500-yard net between them for a distance of two or three miles. After the boats tow the nets to a shoal, a runboat from the fish house comes to bail the fish to the hold and bring them back to be sorted. Only two crews continue to work the sound using the haul-net method. 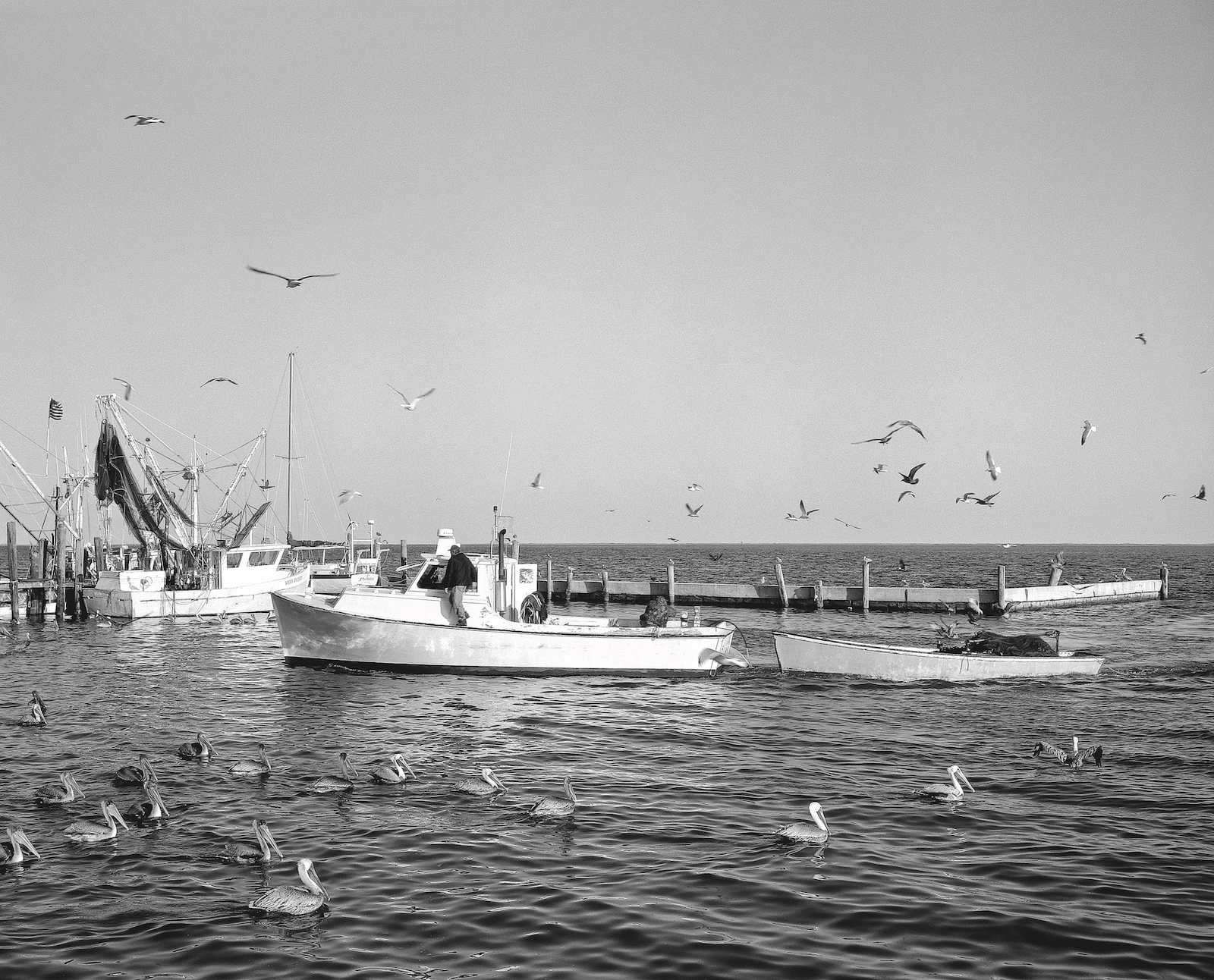 When I talked with Core Sound residents, what I had often photographed as purely artistic compositions—boat, marsh, the Sound as landscape—became cultural documents loaded with significance and complexity. Primarily, of course, a boat is a physical object built and used for practical ends. A fisherman is rarely sentimental about his boat; it’s useful for as long as it enables him to make a living. When the boat ceases to be useful, it can be sold or stripped of its assets and towed to a marsh where, in time, it “falls to pieces.” Yet fishermen and their families also can be very tender about a boat. One woman recalled how her father would go to his boat every night after supper to wash it down, paint, mend net, or tinker with the engine. Her mother would smile as he went out and say, “He’s got to go tell her goodnight.” Another woman teared up when describing a boat her husband sold. “Selling a boat,” she said, “is like a death in the family.”

“Selling a boat,” she said, “is like a death in the family.”

Fishermen themselves size up a boat quickly and with an intrinsic aesthetic appreciation. Some boats are “pretty boats”;” others are “ugly” or “awkward looking” if they don’t seem to hit the mark. Harkers Island fishermen will often declare that their boats are “prettier” than Atlantic boats, and some Atlantic natives agree, although others offer a kind of backhanded compliment. “The Atlanticers, we weren’t really concerned about how pretty [a boat] was,” explained one boat-builder. “We were more concerned about how it worked.” Indeed, a workboat is not only a distinctive expression of the builder but also of a community. In addition to Atlantic and Harkers Island styles of workboats, there also is a Marshallberg style, each defined by a master craftsman at some point in their community history, although there would be variations within that community. “I can look at a boat and tell where it was built,” the boatbuilder told me. “Most of the time, I can look at a boat and tell who built it.” 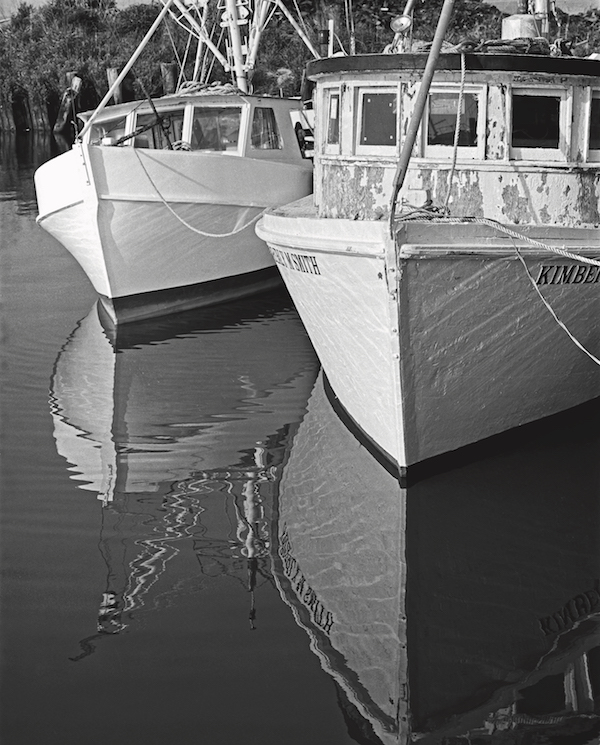 "Kimberly M. Smith, 2006." The Kimberly M. Smith (right) has a straight bow, while the unidentified boat on the left has a flared bow, a well-known feature of boats built in Harkers Island. 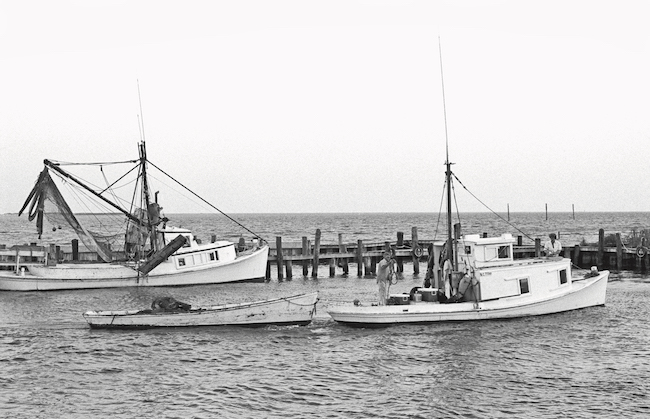 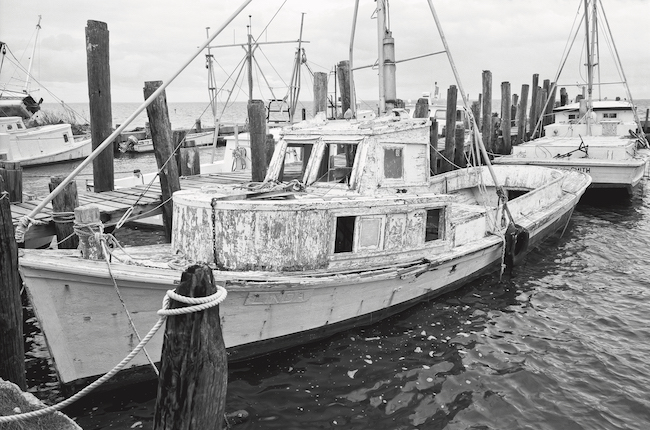 Thus, a Core Sound workboat is a link in the social and historical web of Down East communities. This small social web widens over time with the addition of new owners, mechanics, painters, carpenters, captains, and crew members from several other communities, across three generations, and it seems to be part of the common memory, recalled with surprising ease. From these photographs, residents could identify a boat by name, owner, builder, and the boat’s namesake.

When I ask fishermen how they know so many of the same stories about a particular boat, they often refer to the closeness with which they work on the water. Although fishermen are independent sorts, leaving before dawn and returning after dark (sometimes remaining away for several days), they are very aware of each other. Peering across the sound in the twilight, a fisherman quickly knows who is anchored for the night or heading to shore. He reads another boat by the pattern of its lights, the design of its pilot house, the lift of its stern, the shape of its bow. The workboats of Core Sound are not cookie-cutter creations. They bear the stamp of their makers, their users, and their communities, and, read attentively, Core Sound boats express many things about their environment—the kinds of fish they were built to catch, the depth of the waters they were meant to ply, the size of the waves in those waters, the length of the fishing trips.

The workboats of Core Sound are not cookie-cutter creations. They bear the stamp of their makers, their users, and their communities.

These workboats, too, are symbols of adaptation and resilience. Change—environmental, cultural, and technological—is a constant for the people of Core Sound, where landscapes transform randomly and often. Hurricanes open and close inlets, shoal up channels, and destroy landmarks. As sea level rises with human-induced climate warming, shorelines erode and creekside pine forests die when the salt water invades. In response to new technologies, fish populations, and regulations, workboats may be repaired and rebuilt so often that an older boat may carry nothing that its builder would recognize except the shape of its hull—a much different vessel from one launched behind the builder’s house in 1920. 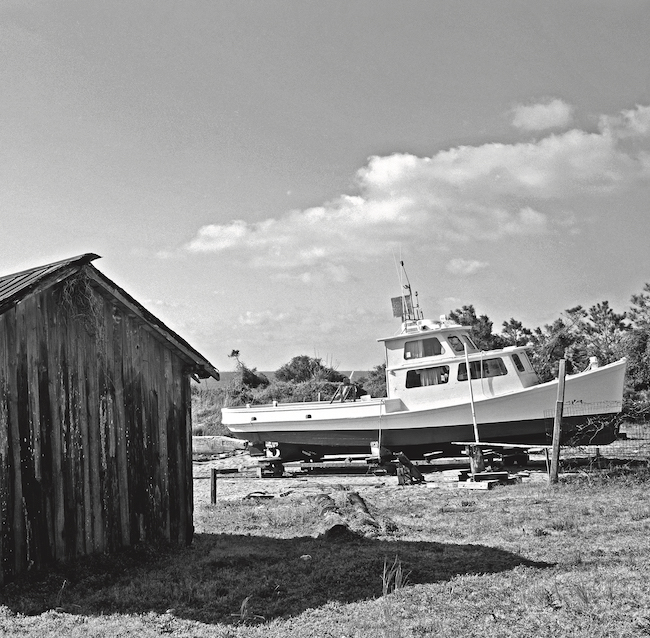 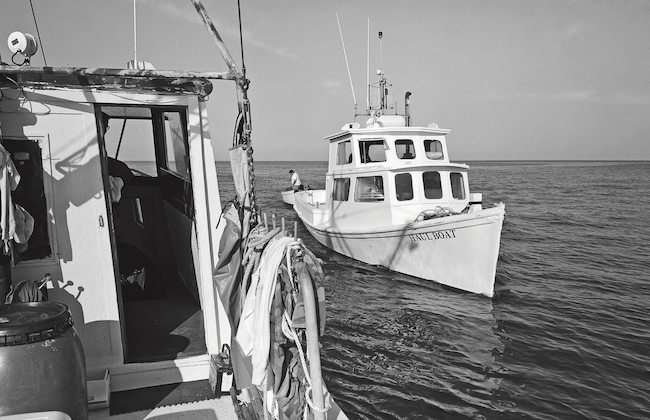 "Haul Boat, 2006." Called the Marion A. when built by Ambrose Fulcher in 1936, the Haul Boat has a lean and narrow design that reflects early engines with less power, which in turn required a design that minimized drag. Here, the Haul Boat approaches the Old Salt in a choreography in which each boat hauls different ends of the same net for several hours. 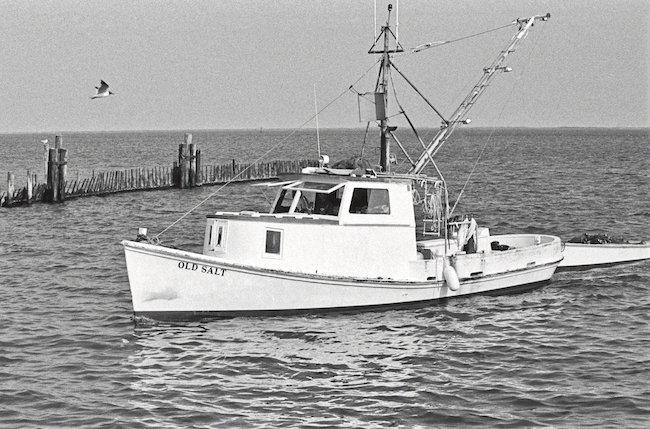 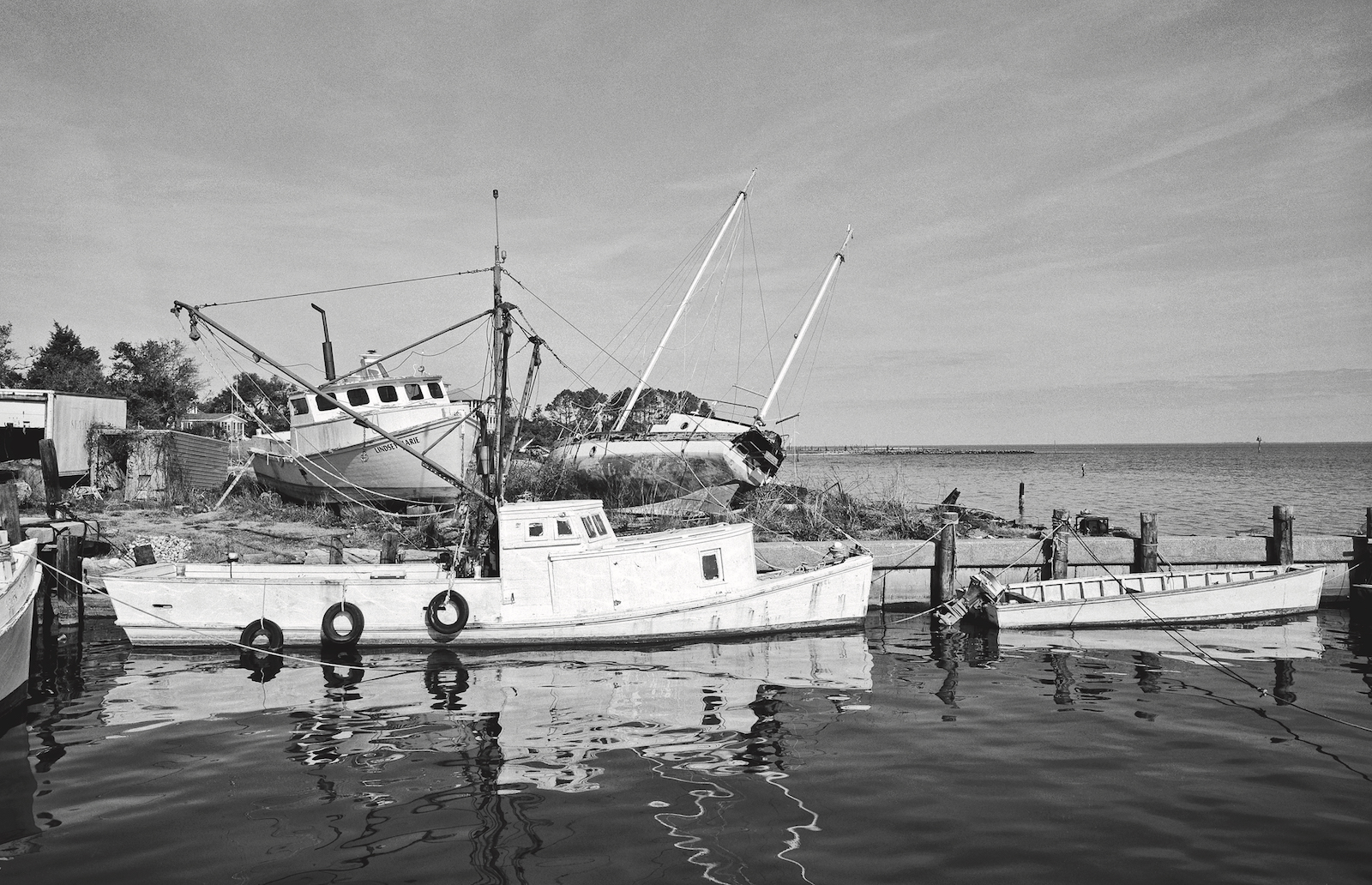 "Hazel, 2005." Dennis Robinson of Atlantic built this boat in 1920. Hazel's lines have been changed considerably, with approximately ten feet added to it and the stern squared off to enable owner Leonard Robinson to use the boat for pound fishing.

Core Sound boats are also metaphors for what is happening along the coast. One elderly fisherman described himself as “an old man in an old boat,” acknowledging in an understated way that both of them are “going to pieces.” So is the maritime culture to which both belong, as the mournful and elegiac tone that permeates so many conversations Down East suggests. Today’s challenges overwhelm fishermen and their communities. Declining fish stocks have lowered catch limits, but stricter regulations failed to bring back the fish. When fuel costs rise, vessels stay at the dock. Fish houses are closing, and commercial harbors are being converted to marinas. New residential developments springing up along the waterfronts push up property taxes, making homes less affordable for residents. Although shaped through many generations, the traditions of these fishing villages are eroding swiftly.

A boat goes this way and that, heading out before sunrise and returning long after the sun sets, and as it goes it attracts attention like a bright, fluttering banner. It recalls the crew who fished it, stories of good fishing days and special places—a big haul at Teach’s Hole or Evergreen Slough or Royal Shoal. Every boat carries a penumbra of meaning beyond its physical structure. Now, in the proliferation of “For Sale” signs sprouting on the windows of more and more workboats, Core Sound boats carry hints and portents of political and biological dilemmas, worldwide environmental problems, even a future without fishing.

Every boat carries a penumbra of meaning beyond its physical structure. 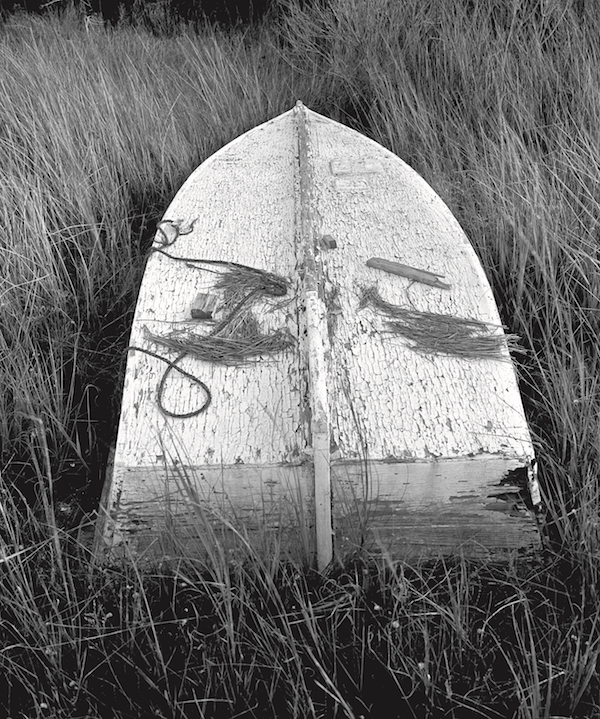 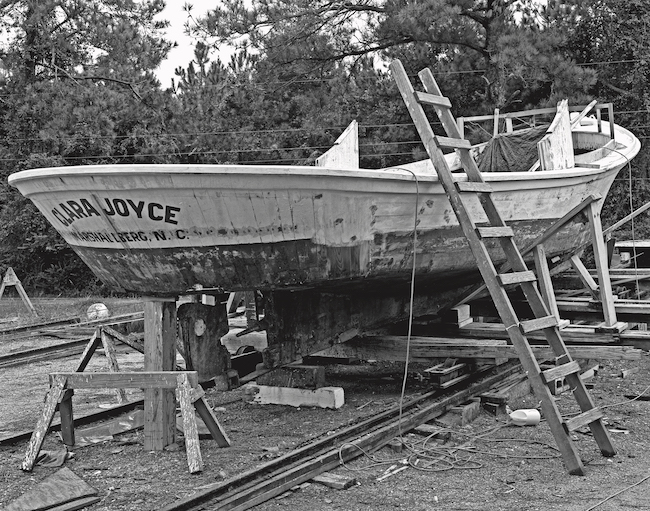 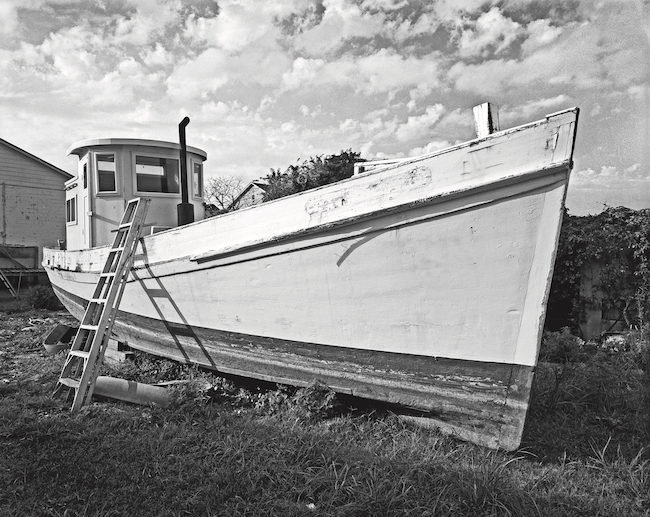 "Nancy Ellen on the Hill, Atlantic, 2006." Owner David Smith of Atlantic is refurbishing this Ambrose Fulcher creation from 1927. Formerly known as Pauline, the Nancy Ellen will be a pleasure boat. 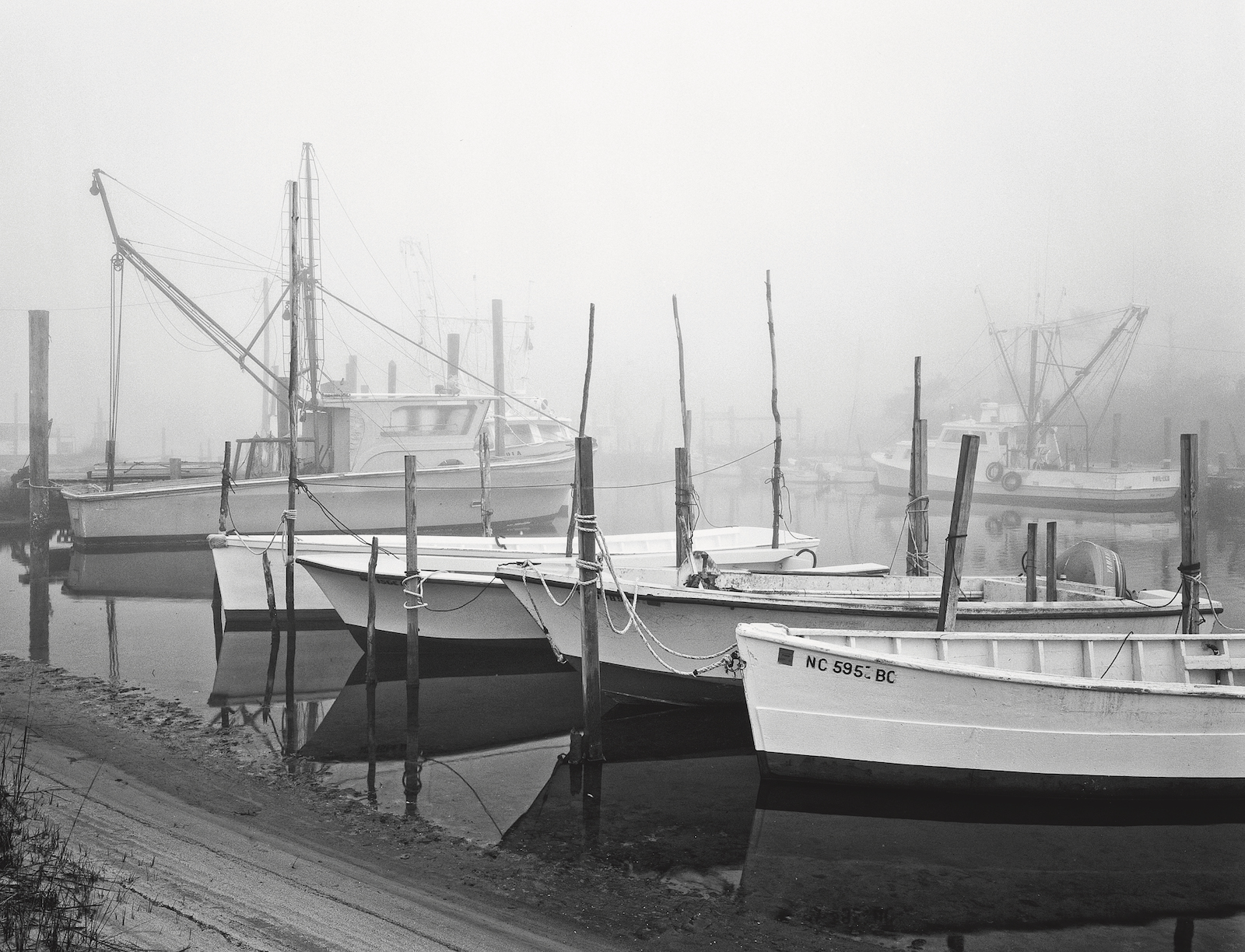 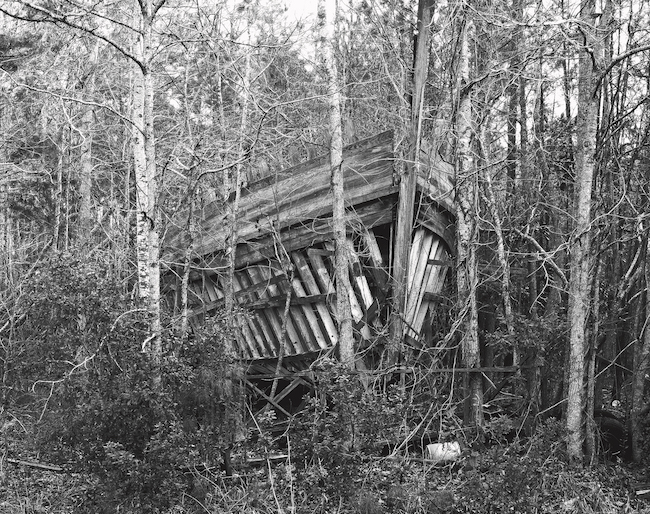 "South River, 2007." A boatbuilder began this seventy-two-foot trawler in his back yard in South River about seventeen years ago, but he abandoned it when the buyer ran out of money.

Lawrence S. Earley is a writer and photographer from Raleigh, North Carolina. He is the author of Looking for Longleaf: The Fall and Rise of an American Forest and the former editor of Wildlife in North Carolina magazine.