Often referred to as Little Dixie, the southeastern corner of Oklahoma is home to more than just customs stemming from Native American influences in the 1800s and southerners who later migrated to the area in the 1900s. Outside of similarities in agriculture, architecture, demographics, and politics resembling the American South, in one town you can add another unique feature to the list: the circus. Hugo, Oklahoma, the county seat of Choctaw County, has served as the winter home for traditional tent shows since the 1940s.

The Miller family’s Al G. Kelly and Miller Brothers Circus was the first to call Hugo, Oklahoma, home, thanks to the support of local businessman and circus fan Vernon Pratt. While Pratt offered the Millers free water for their animals, it proved to be a good move for circus owner Obert Miller and his two sons, Kelly and D. R., as the family was looking for a warmer climate over the winter months. Soon after the Millers established Hugo as their winter quarters, other shows followed. In addition to the town’s temperate climate, Hugo also has easy access to state highways, which run north and south as well as east and west, creating more options when planning circus routes.

The Hugo-based tent shows often followed the agricultural harvest and brought entertainment to rural communities throughout the South. Through the years, approximately twenty circuses established winter quarters in Hugo, with notable owners such as Herb Walters, the Miller family, and Jack Moore all setting up shop in the Little Dixie town known as “Circus City, U.S.A.” As of 2014, only three traditional tent circuses continue to call Hugo home: Carson and Barnes, Kelly Miller, and Culpepper & Merriweather.

Despite the boom and later decline of circuses in the area, Hugo continues to hold strong to its circus heritage. One distinct reminder of this heritage can be found while exploring the tombstones at the Mount Olivet Cemetery. In the 1960s, a section of the cemetery was established as Showmen’s Rest, serving as the final resting place for circus entertainers, employees, and show owners from not only Oklahoma but all parts of the country. Wandering through row after row of unique markers and engravings sparked an interest in the people laid to rest there. Unanswered questions led to the development of an oral history project focused on preserving the culture of those with circus ties in the Little Dixie town of Hugo, Oklahoma. 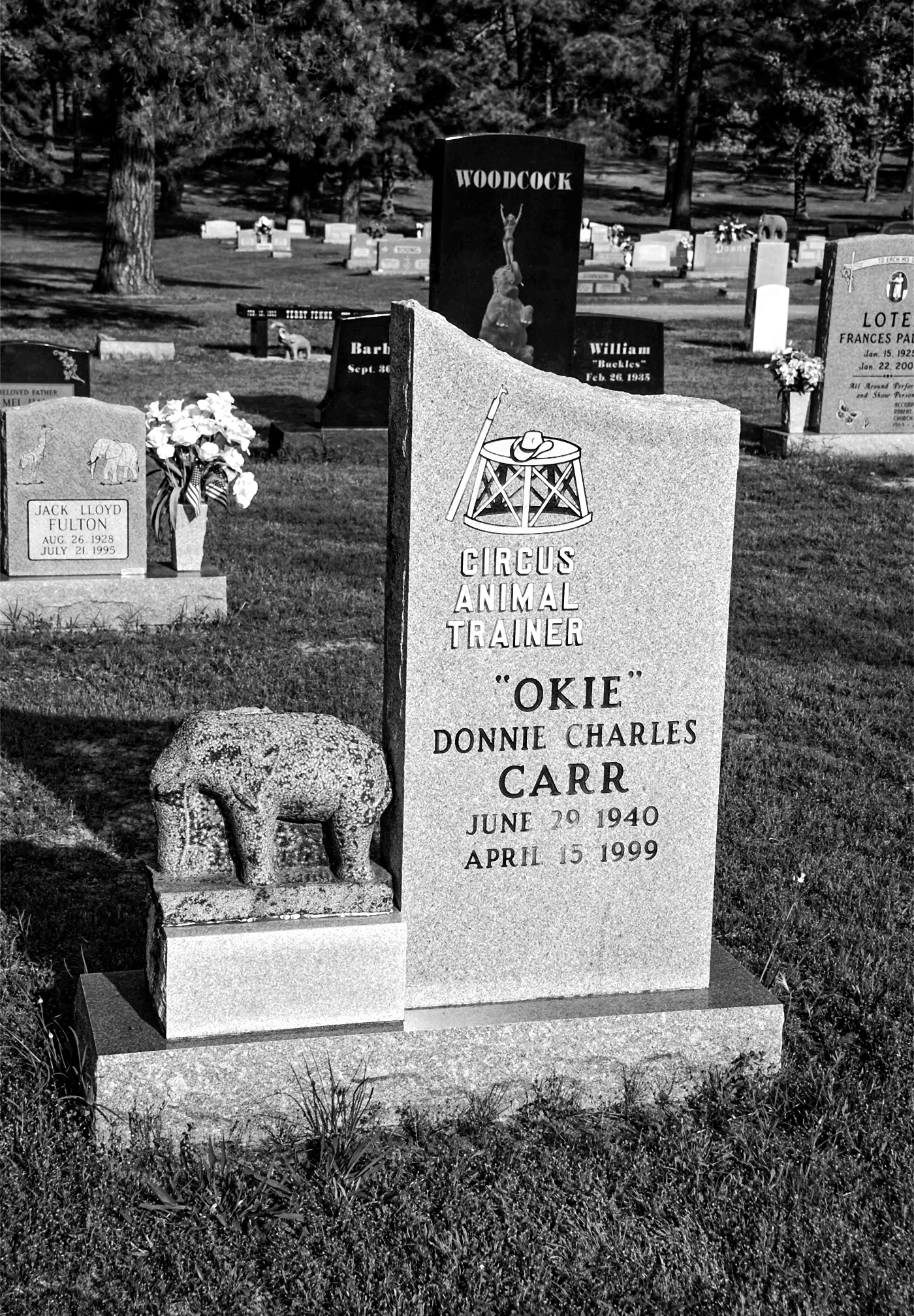 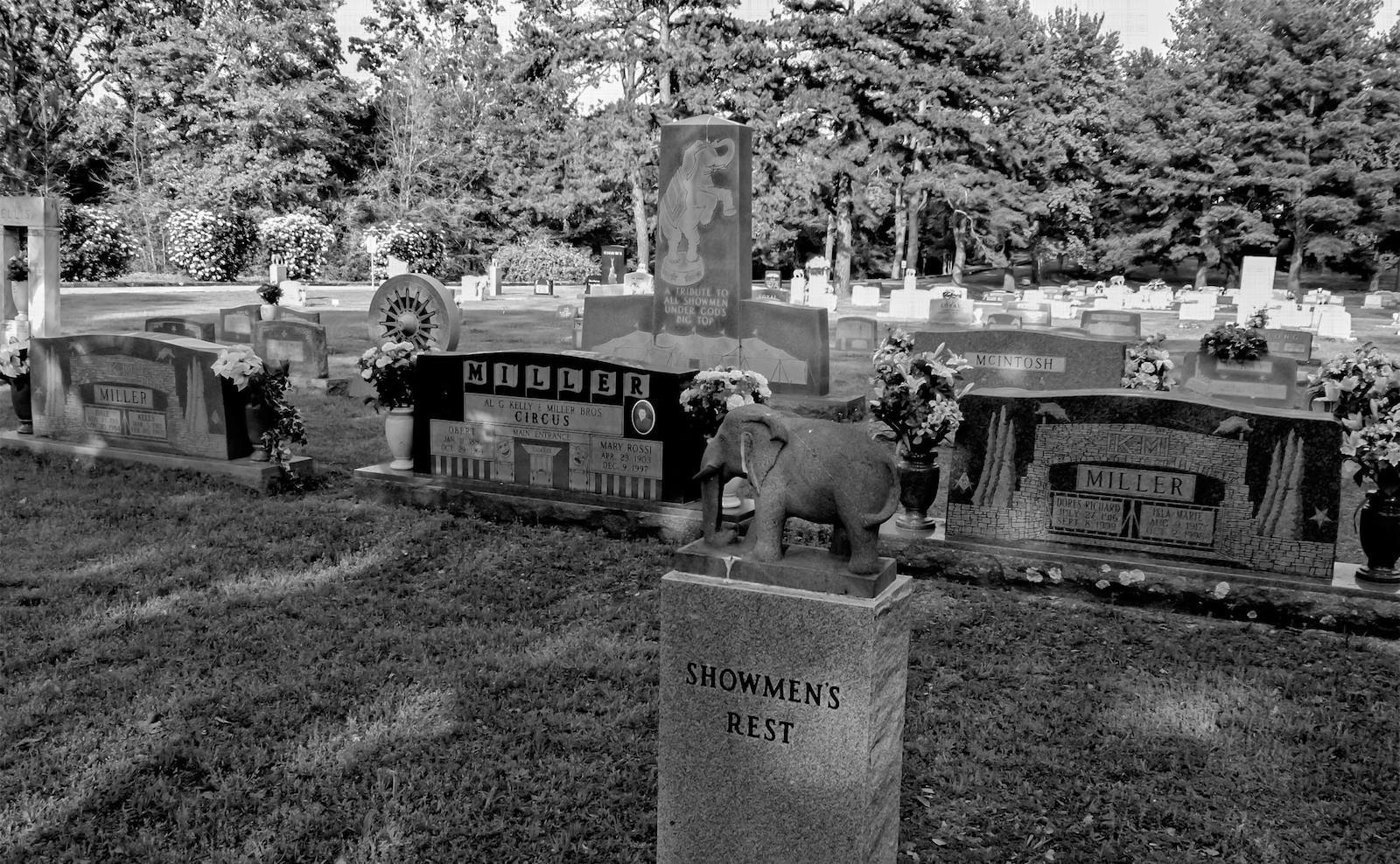 “I go out to change the flowers on my parents’ and my grandfather and stepmother’s graves, oh, four times a year or something, and I’m always amazed when I’m there. It never fails that at least one group will stop by, or maybe just a couple, or maybe a bus tour will stop by to be looking at this particular part of this community cemetery . . . It’s kind of a tourist place in Hugo. And you always feel kind of silly asking people, ‘Well, you’ve been to the library, you’ve been to the museum, you’ve been here, you’ve been there. Have you been to the cemetery yet?’ And they kind of give you a funny look. But it’s a really neat place, and it kind of gives you a sense of well-being when you are there to know that these people will never be forgotten.” 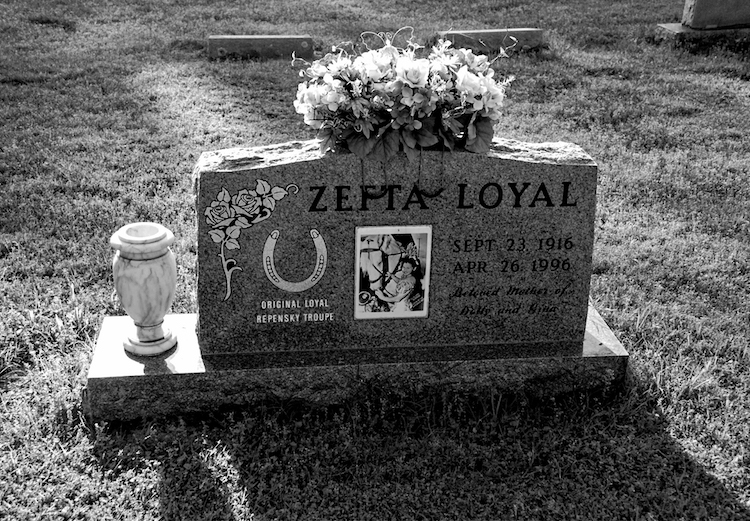 “Now, my momma’s pumps are buried with her, that and her whip is buried with her. She’s buried over here [at Showmen’s Rest in Hugo]. She asked if we would put that in with her. Now, there was one problem. I couldn’t find—well, her whip is buried with her. Her pumps are not. I couldn’t find her pumps and I just panicked. After we had her buried and I went back home, we were trying to get things ready to sell and move out of there and I found her pumps, but it was too late. So I had one pump and Gina had one pump, my sister, and I finally gave her the other one because I thought they needed to be together. So she’s got them, but we couldn’t put them in with her. I was really upset about that because she said, ‘Put my pumps and my whip in there,’ but we did put her whip in there.”

“We had a gentleman that worked for us, and he was just a drifter that came on as a teenager and ended up spending his whole life with us. His name was John Carroll, and he worked with the animals. And especially back in the old days, some of the guys that would come along, they were drifters and didn’t really have family connections, and so the circus kind of ended up being their family and their home, and they spent their lives here. So John Carroll was one of those characters. He had lost his eye in an accident, and he received like an insurance settlement. I think it was seventeen thousand dollars or something, and he didn’t have a family. About five or six years later, he passed away. And unbeknownst to my father, he had left this insurance settlement to my father. My dad didn’t know what to do with it, and about that same time my uncle passed away, and that was in 1960.

So he got the idea of making this place where circus people would be buried, because a lot of times circus people, like I say, don’t have roots, and they would be buried in Timbuktu. Nobody would ever know who they were or know this rich history that they had or anything about them. So he thought it would be cool to have this area where circus people could be buried and that there would always be somebody that would come and visit that would be able to tell stories about that person or have a connection. It was just going to be a place where they wouldn’t be forgotten. So when my uncle died, he took this John Carroll money, and he purchased this area at Mount Olivet. He named it Showmen’s Rest. My uncle was the first person buried there.

My father buried John Carroll there. He has one of the biggest headstones out there. I don’t know if you’ve been there or not, but his is quite large. And then my father—what was left, he invested it so that it would always be earning money. And he had it fixed so that if somebody died in the circus business and wanted to be buried there, if they didn’t have the means or the family, that John Carroll’s fund would supply the plot and put a small marker. And if you’ll notice while you’re at the cemetery, there’ll be some small markers that say, ‘Donated by the John Carroll fund.’ It’s worked quite well. We’re almost full. We only have just a few plots left, and we’re trying to figure out how we can expand. But that was the basis of it, how it got started. It was an inheritance from one of our workers that didn’t have family and left the money to my father, and my father had this vision of a place that would be like it is today. It’s really become a landmark in Hugo.” 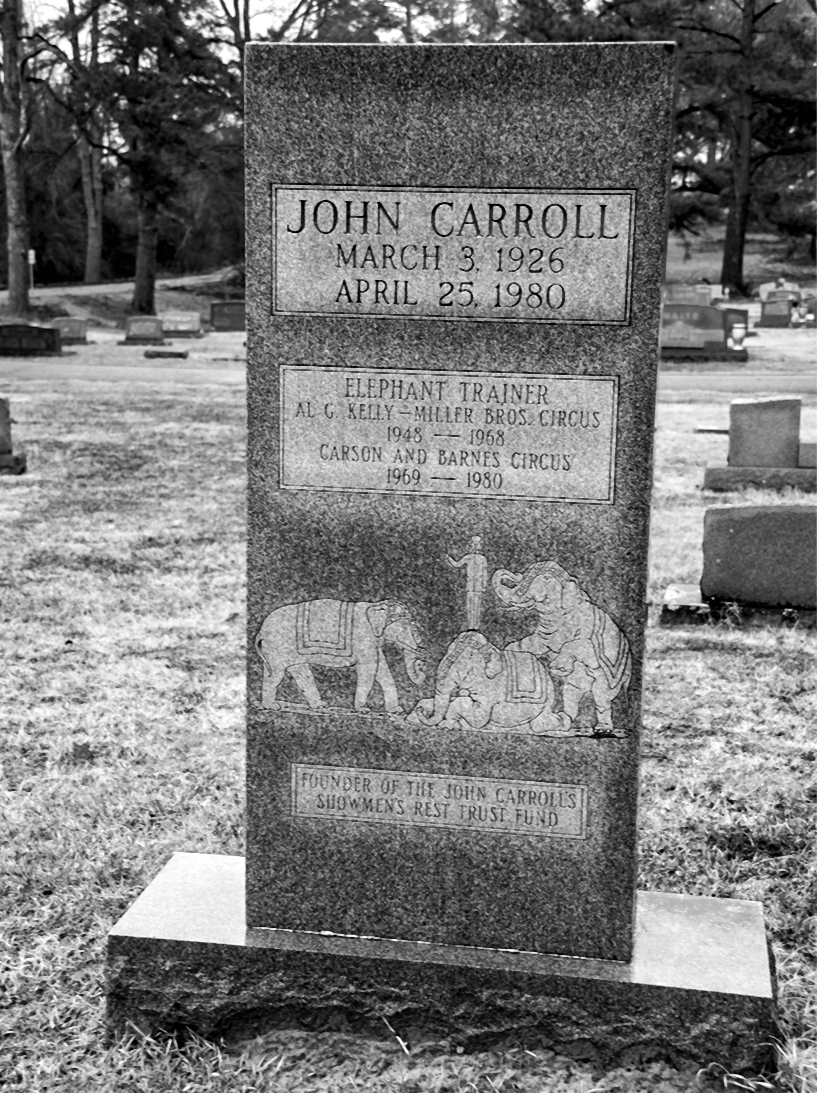 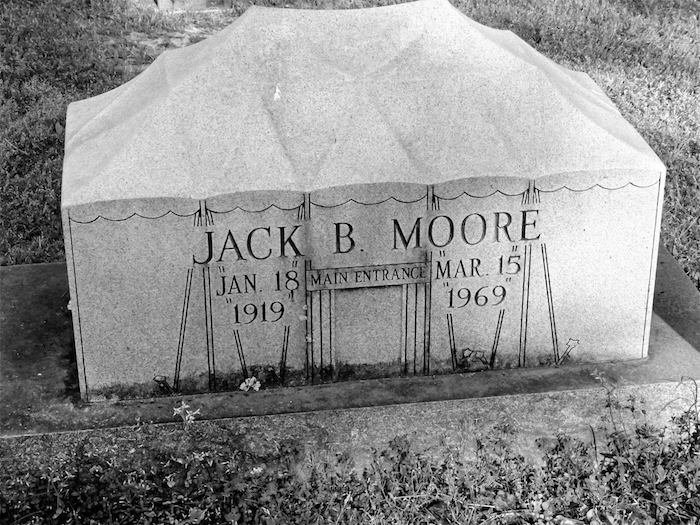 Mike Moore: “He died in March of 1969, and Mother made all the arrangements. There was a Showmen’s Rest, then. There weren’t very many people in it, but there was one there. I don’t know the story of how it got to be configured as a circus tent.” 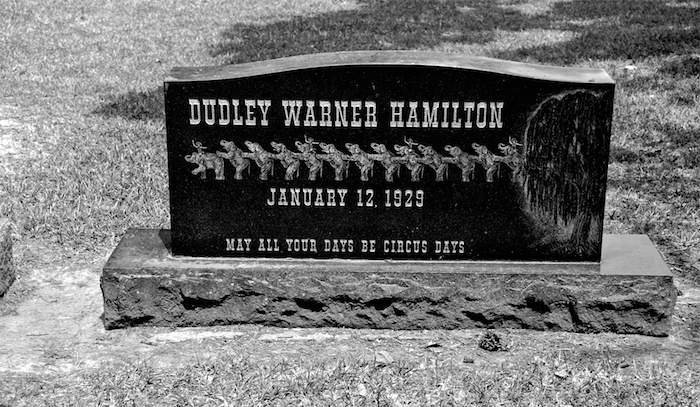 A friendly circus greeting from Dudley Hamilton (1929–). Inscription: “May all your days be circus days.”

“I used to come in here every winter for a while, but I don’t know. I just like this little town. The people here are friendly and they’re especially friendly to circus people. I started going to church here and kind of got involved in that way. I’ve gotten to know people at the coffee shops. It’s just home for me. I intend to be here until they put me out there in Showmen’s Rest.” 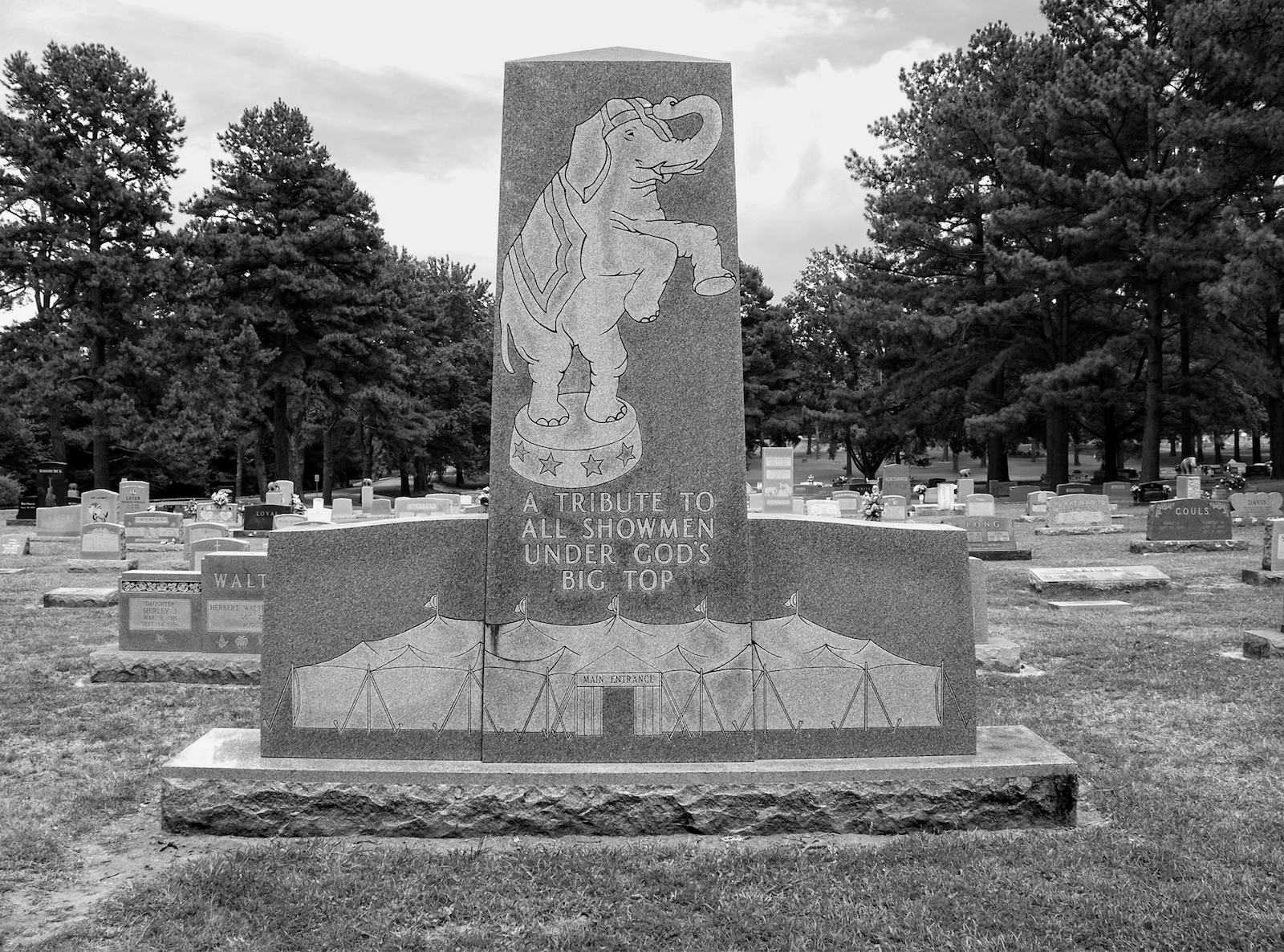 Monument at Mount Olivet Cemetery erected in 1960: “A Tribute to All Showmen Under God’s Big Top.”

Terry Loter Perkinson
—one of several children born to Frances and George Loter, grew up in the circus and later transitioned into raising and selling exotic animals

“I hate to admit it, but when they leave town here in the spring, I go out on the highway and watch. You have a certain—Momma used to call it ‘itchy house shoes,’ because she wanted to go, but she got too old to go. She had the itchy house shoes.”

Juliana Nykolaiszyn, associate professor and oral history librarian, joined the Oklahoma Oral History Research Program at the Oklahoma State University Library in 2007. From interviewing narrators to processing oral history collections, her work involves not only the creation but preservation and online access of oral histories.