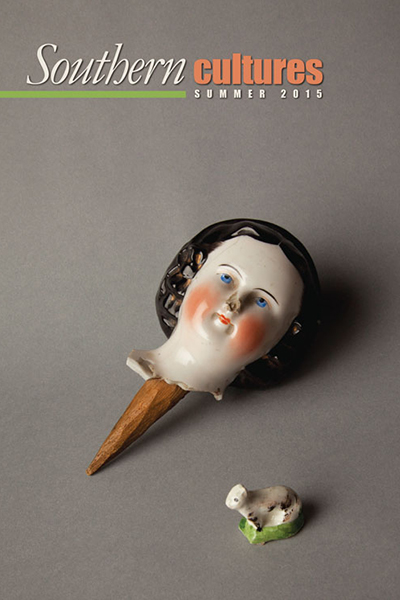 In this issue, we float like a butterfly, sting like a bee. Muhammad Ali returns victorious to a changed Atlanta, feminist presses flourish in the North Carolina Piedmont, the Vietnam War inspires literature and student protests, southern women writers challenge the maternal ideal, local sheriffs deny Judge Lynch, Little Dixie creates the Circus Cemetery, and a man fights a gorilla (and wins).

"Alongside the good ol' boys, we are now more aware of southerners of every color, class, sex, and religion, who resisted slavery, opposed the planters, fought for the ballot, sat-in at lunch counters, organized unions, and preserved their Native traditions."

"In Atlanta, nothing else seemed to matter with the champ in town. He owned the city. It was a powerful scene—'sheer Black, street-corner ebullience out for a Sunday evening promenade."

"So where are the voices of those millions of mothers who reject, resist, and redefine the maternal ideal?"

"'Running this old printing press / with a woman on my mind / it jammed up tight eight times today / and I think this might make nine.'"

"'What is most important . . . Is that Bulgarians know there are people on the other side of this globe who have the same problems, the same feelings, even the same words for things as we do.'"

"'How can I be bitter? You are my strength, you ghosts.'"

"The 6,000 UNC students who went on strike in May 1970 not only showed the power of their collective voice but also evidenced that protests on southern campuses could rival the scale and intensity witnessed on any college or university in the nation."

"There were more threatened than actual lynchings in the twentieth century, while the reverse was true in the years prior to 1900. These trend data suggest that the South became more effective in suppressing mob violence after 1900, such that, although threats of mob violence remained high, the number of persons killed annually declined significantly."

"Daddy wore a coat and tie when he wasn't playing golf— even to fight gorillas . . ."