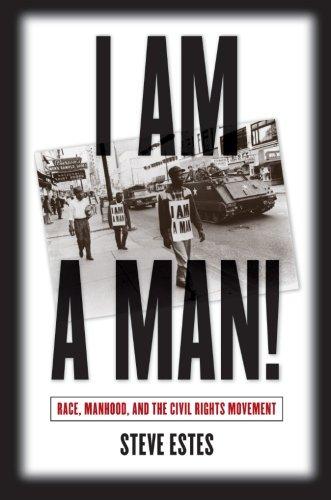 I Am a Man!: Race, Manhood, and the Civil Rights Movement by Steve Estes (University of North Carolina Press, 2005)

by Larry Isaac
Southern Cultures, Vol. 12, No. 2: The Tobacco Issue

One indication of a book’s value is its ability to invoke powerful images for the reader, images that it directly constructs and those it might encourage by extension. In the early part of I Am a Man!, the powerful image of white male supremacy remained foremost in my mind. I reflected on Jack Johnson, the first African American “Heavyweight Champion of the World” (1908), and how his success in the world of boxing boldly violated racist constructions of white manhood and civilization; I reflected on all that mostly male “strange fruit” that the NAACP had so meticulously documented in attempts to get the federal government to pass antilynching legislation; I reflected on the image of that fourteen-year-old boy from Chicago who, while visiting relatives in Mississippi in 1955, was tortured and murdered for presumably talking “fresh” to a white store clerk; and I reflected on how massacres of entire African American communities (like Springfield, Illinois, in 1908 and Rosewood, Florida, in 1923) were motivated, in large part, by rumors that a black man raped a white woman.