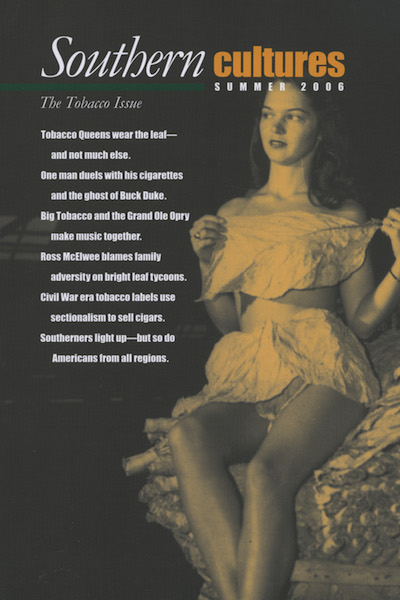 We meet Tobacco Queens and Barons, and we take a look at brightleaf’s reach beyond the South. “She smokes her way through another story, punctuates it with the Lucky . . . ” writes the poet Michael McFee. Surely he was talking about this issue of Southern Cultures.

"The Dukes linked sex and the cigarette, which was audacious not only because they were abstemious Methodists but because there's no earthly reason burning a foul weed in your mouth ought to invoke the pleasures of sex. And yet it does."

"'All decked out in tobacco leaves,' the caption read, 'she might be aptly termed Miss Venus.'"

“My Aunt Smokes Another Lucky”

". . . and everybody laughs, especially my aunt, smoke haunting her head like ghosts of family."

"It's not necessarily that we want tobacco; tobacco wants us."

The South, the Nation, and Tobacco

"My firmly devout Church of Christ grandmother from the hills of east Mississippi dipped snuff for most of her eighty-five years. She wasn't proud of her habit--tried to hide it, in fact."