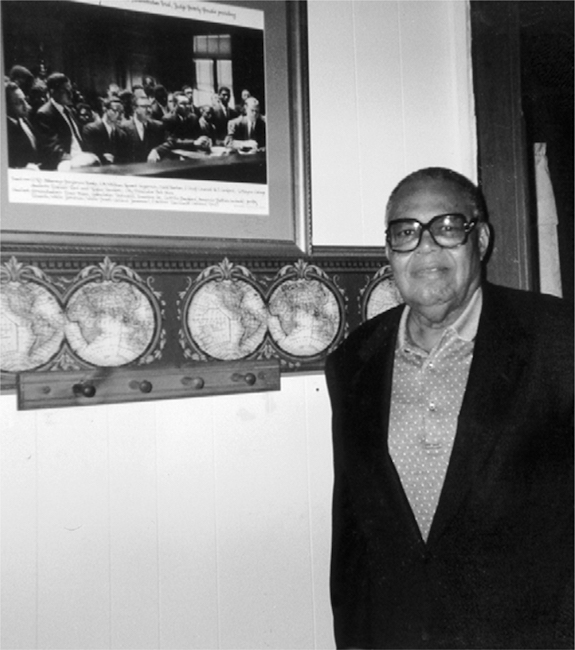 H. T. Lockard, 2000, standing by a picture of the lawyers defending the Sit-in demonstrators, photographed by Elizabeth Gritter.

"They had me park my car behind this house. They told me the next morning that a posse had formed downstairs in the courthouse and was going to, I guess, lynch me or whatever."

Born on June 24, 1920, Hosea T. “H. T.” Lockard attended LeMoyne College in Memphis, Tennessee, from 1940 to 1942. In 1942, Lockard put his education on hold to serve in the Army Medical Corps in World War II, which included three and a half years in North Africa, Italy, France, and Germany. Following his discharge from the Army in 1945, Lockard studied at the Sorbonne in Paris and finished his bachelor’s degree at LeMoyne in 1947. In June 1950, he graduated from Lincoln University Law School in St. Louis, Missouri. He moved back to Memphis later that year to practice law and became active in the local chapter of the National Association for the Advancement of Colored People (NAACP). He assumed its presidency in 1955 and remained in that position until 1958, heading the NAACP’s legal committee and contributing to national efforts. Local Civil Rights activist Vasco Smith remembers that when Lockard began working for the Memphis branch most of the cadre of individuals who led the local Civil Rights Movement had not yet arrived. “For a while, Lockard was pretty much the whole show,” said Smith. “He did an outstanding job, and he probably laid the foundation for a lot of things that happened later on.” Lockard also had an illustrious political career. In 1964, he became the first African American to hold elective office in Shelby County (home to Memphis) since Reconstruction when he won a seat on what later became the County Commission. He was a leader in local African American political clubs, and these efforts paved the way for his tenure as the first African American cabinet member in Tennessee as assistant to Governor Buford Ellington from 1967 until 1971. Afterward, he returned to his law practice in Memphis and served as a judge from 1975 until he suffered a stroke in 1994.