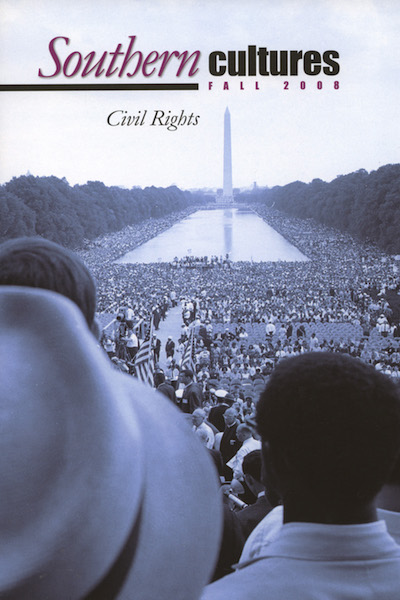 In this issue, we look at the forces behind and inside the single most important social and political advancements of the last half-century in the South: The Civil Rights Movement. This special issue includes: a never-before published interview with groundbreaker Alex Haley; a provocative investigation of the news—good and bad—about racial attitudes over the last thirty years for southerners and for the rest of the country; an insightful retrospective of Harry Golden, daring satirist and Civil Rights pioneer; a view form inside southern communities as they try to reconcile histories of Klan violence with broader understandings of the organizations and culture that undergird social unrest; a tour through the Civil Rights museums in the South that shows their power to inform—and transform—a new generation of southerners; snapshots from interviews from the Southern Oral History Program’s ongoing study of “The Long Civil Rights Movement”; an interview with Civil Rights lawyer H. T. Lockard, who reveals the inner-workings of the Movement’s early legal maneuverings during his time on its front lines; and much more.

"I think in a lot of areas an almost mystic thing happened, given the backdrop. When I was a boy there was a pretty strict segregation, and it was so much the historic custom that really relatively few people even questioned it. Then came the 1960s and their challenges to the system."

The “Golden” Era of Civil Rights: Consequences of The Carolina Israelite

"The Carolina Israelite was a remarkable solo act, a bold effort to liberate its southern white readers from the inertia of tradition, defying the odds that anyone producing a one-man newspaper in the mid-twentieth century was very likely to be a crank."

“For Us the Living” Visits to Civil Rights Museums

"'When I came to, I was laying on the seat of a car and my sister was leaning over me. I thought she was crying. I could feel her warm tears spilling down on my face. But they weren't tears. She was bleeding because someone had hit her upside the head. And the next day we were marching again.'"

"The drive for minimal justice on behalf of black people had come to this: the ordinary white people of the South . . .on the edge of a collective nervous breakdown composed in roughly equal parts of ignorance, rage, and paranoia."

"They had me park my car behind this house. They told me the next morning that a posse had formed downstairs in the courthouse and was going to, I guess, lynch me or whatever."

"Fannie Lou Hamer, one of the genuine heroes of the Civil Rights Movement, one said, 'So this ain't just Mississippi's problem. It's America's problem.'"

“Everything Changed, but Ain’t Nothing Changed” Recovering a Generation of Southern Activists for Economic Justice

"'I took her to see the movie Norma Rae so that she could try to get some perspective on what kind of role she was playing. I think she appreciated seeing that and could see how the city would like to get rid of her because she had a whole lot more power than she imagined.'"