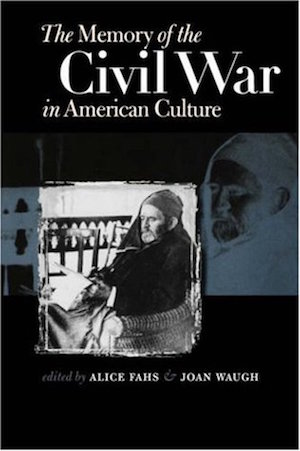 Soon after the Civil War—and long before the current interest in “historical memory”—Americans understood that the way they remembered the Civil War would define their nation. For nearly a century and a half, commemoration of the Civil War has served as a sort of national Rorschach test, exposing divisions of region, race, and gender that no amount of nationalist rhetoric could camouflage. The “memory” of the war has attracted the attention of gifted commentators ranging from Edmund Wilson to Robert Penn Warren. More recently, Gaines Foster and David Blight have contributed essential works that clarify the shifting interpretations of the war during the half-century after Appomattox. Now The Memory of the Civil War in American Culture, a collection of essays edited by Alice Fahs and Joan Waugh, offers a summation of current wisdom about the contested memory of the Civil War from its close to its centennial. Consisting of revised papers that were delivered at a Henry E. Huntington Library conference, the collection addresses literary manifestations of memory (such as autobiography, biography, textbooks, children’s fiction), collective commemoration (such as Memorial Day, statuary, Civil War Centennial), and political invocations of the war’s meaning (in both campaign rhetoric and protest politics). It is no criticism to observe that the essays are suggestive rather than definitive; a multi-volume tome will be required to compile a full accounting of the orchestrated remembrance of the Civil War. Even so, as Stuart McConnell observes in his concise and cogent Epilogue, the collection demonstrates that gifted scholars who study “historical memory” can weave together interpretative strands, such as military and cultural history, that too often have been divorced from one another by scholarly fashion.