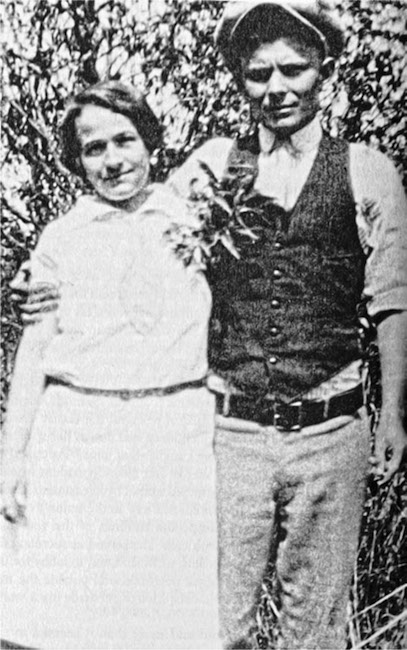 Ella May Wiggins with friend (probably Charlie Shope), 1929, UPI/Bettmann Newsphotos, published in Like a Family: The Making of a Southern Cotton Mill World (UNC Press).

Woody Guthrie considered her one of our nation’s best songwriters. Alan Lomax published her stark union ballads in his acclaimed collections of American folksongs. Pete Seeger recorded a version of her most famous song on a Cold War folk revival album. Her name was Ella May Wiggins, and although she is not well known today, she was one of a handful of southern grassroots composers who combined traditional balladry with leftwing politics to forge a remarkable new song genre just prior to and during the upheaval of the Great Depression. She also helped to spearhead a Communist-led labor uprising of unprecedented scale in Gastonia, North Carolina, then the textile-manufacturing capital of the American South and, indeed, the entire world. And then, before her ringing Appalachian alto could be captured on a phonograph record, she was gone. Ella May Wiggins, the “poet laureate” of the Gastonia Textile Strike of 1929, peer of such southern folk-music giants as Harlan coal-mining singer Aunt Molly Jackson, Arkansas sharecropper poet John Handcox, and Okie balladeer Woody Guthrie, was silenced by a mill thug’s bullet on September 14, 1929. She was only twenty-nine years old, but she left in her wake an extraordinary legacy of protest songs and union activism.