And Other Minor Comforts Between Major Upheavals

“The predictable march into each season has lost its rhythm.”

The sweetest mulberries in Durham, North Carolina, grow in Maplewood Cemetery, on a tree that shades the grave of Leon Jeffers. Every year, in late May, I forage my way downtown, heading north from the Lakewood neighborhood. The first tree teems with a swarm of bees so profuse that the branches seem to vibrate. The boughs of a second tree droop with fruit, but the berries are often dry. The fruit of a third tree, on Carroll Street, is succulent, though I stopped eating from it when I learned the city used to burn trash in an incinerator a few yards away.

And then I arrive at Maplewood. I don’t know if it’s the soil, the sunlight, or Leon, but a force of nature imbues the mulberries with their character—their terroir: sweet but not treacly; juicy but not mushy; fleshy but not dense. Usually, I just pick whatever I can eat at that moment and return later to glean what the birds have left. But last May, I harvested a basketful and froze them so that in the winter I could remember what the year 2020 tasted like. 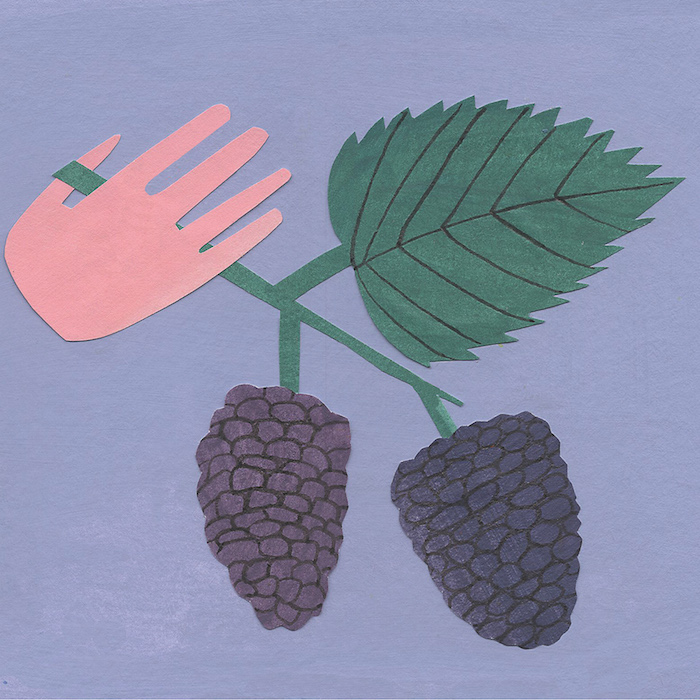 By most accounts, 2020 was a bitter, traumatic year: Millions worldwide sickened by COVID-19 and hundreds of thousands dead. The subsequent economic shutdown and collapse. The disintegration of human connections caused by social distancing. The killing of Black people by police and the rise of white supremacy. Wildfires and derechos, floods and hurricanes—even a tornado on Christmas Eve—all markers of a rapidly changing climate. The predictable march into each season has lost its rhythm. Flowers and trees and berries are blooming at odd times, at their own peril of a killing frost.

Outside a window, a feral rosebush bore so many spring blossoms that I lost count at eighty-five. It bloomed well into December. My heirloom tomatoes, unprepared for climate change, were killed by a damp April chill. But some hardy cherry tomatoes, volunteers planted by the birds, thrived through Thanksgiving.

These cataclysms are being documented for the historical record, official and unofficial. But I want to remember the minor events between the major upheavals. The lessons of nature and its rituals, even if their timing is off, have grounded me when little else could.

I was quarantined for two weeks in mid-March of 2020 after potentially being exposed to someone sick with the virus. Confined to my yard, I became attuned to nature’s incremental changes. The birds sang at six-thirty, then, as the day lengthened, six o’clock.

My nighttime ear learned how to distinguish between the sound of a fox eating dry cat food—a sonorous chomping—and that of a raccoon, a tinnier chipping away. Since no one was driving much, rabbits and possums and squirrels moseyed across the street with impunity. Barred owls chuckled in the pine tops.

My quarantine ended as the wisteria flowered, draping the trees in grape-scented leis of purple. By April, the air was redolent with honeysuckle. Unprompted, last year’s chard thrust itself through the soil alongside the Gerber daisies. A family two doors down had a newborn son, whose colicky cries soothed me because at least they were a human voice. Then in late spring, a violent storm wrecked nests, broke eggs, killed hatchlings, stripped mulberries from their branches. Fruit remained on Leon’s tree, but it was out of reach. 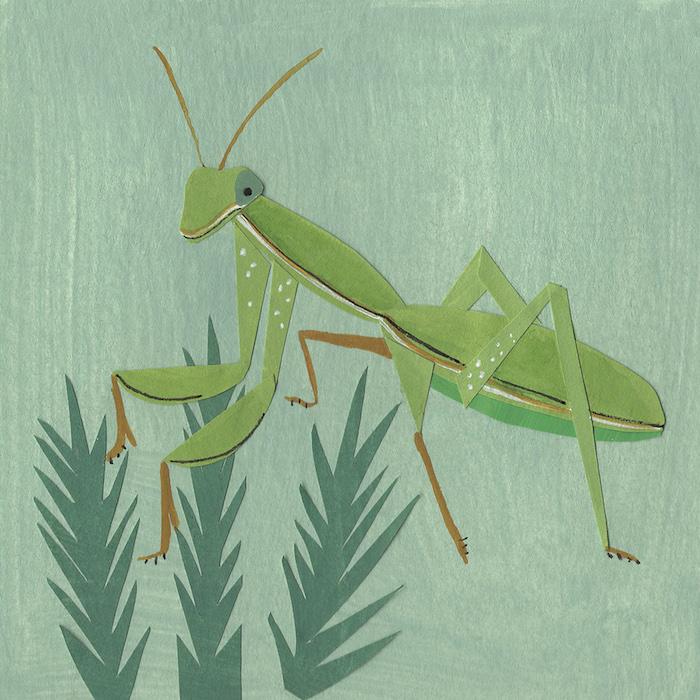 Three months into the pandemic I realized that, since it began, with the exception of the gloved hand of my dentist, I had not been touched by another human. Not an embrace upon seeing an old friend. Not an incidental brush of a shoulder when boarding a bus. Not a grazing of a cashier’s fingers as she hands me my change. Because most human communication was transmitted through a computer screen or from behind a mask, all of the social cues had become obscured and scrambled. This was a language I didn’t comprehend. Although I’m an introvert, I can be quite chatty. So out of desperation I began to talk to bugs and invertebrates.

Good morning to the praying mantis perched in the rosemary bush.

I’m sorry to the earthworms whose neighborhoods I disheveled while planting tomatoes.

I expanded my social circle to fungi. How’s it going? to the team of green-spored Lepiotas in right field of the baseball diamond in Wrightwood Park.

And then, to the once-in-a-lifetime comet that I never could spot: Where are you?

I’m talking long-distance to an indifferent ball of ancient ice, I thought. I really should just pick up the phone and call someone.

The birds began chirping at 4:30 a.m. The chard withered after twenty-nine consecutive days of ninety-degree heat. The roses held on, toughened by the weather extremes of the past twenty years. I watered the garden but let the grass turn brown and go dormant. Gradually, my neighborhood came back to life, all of us tentatively leaving our yards and staying socially distant, but its heart regained a rhythm. The morning dog-walkers and evening strollers, we all waved at one another and chatted from across the street.

Did you feel the earthquake? Would you like some cucumbers? How are you holding up?

The baby’s colic seemed to subside. It began to rain, not every day, but just enough. Volunteer tomato plants sprawled along my property line, red, ripe fruit gleaming in the sun like gems. The cantaloupe vines crawled across the yard, flowered, and produced melons the size of bowling balls.

And the blueberries, they finally made it.

Three years ago, when my husband, Dennis, was dying, a friend gave me a blueberry bush. I planted it in the front yard and fussed over it. I wanted to do for the bush what I could not achieve for Dennis: keep it alive. Initially the bush bore fruit, but the berries stayed green. Despite my obsessive watering and constant surveillance, the same phenomenon occurred in the second and third seasons. I began to consider the bush as merely ornamental. But in 2020, I did nothing. Other than an occasional bit of water, I ignored it. One day, I noticed the fruit had ripened. Over the course of a month, it gave me fifty, sixty berries. All the bush needed was for me to let go. 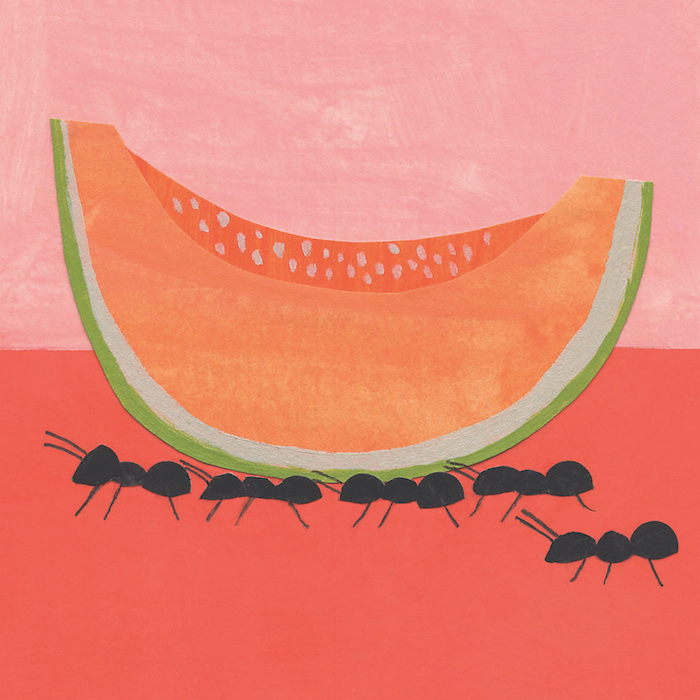 It is August, time for the sugar ants to arrive. Every year, they caravan by the hundreds, maybe even the thousands, to vacation for a month in my kitchen. From a campground behind the faucet, they converge on a droplet of cantaloupe, a floret of broccoli, a knife slickened with peanut butter. They’re highly sociable. I’ve seen them work together to carry off all manner of goods: a breadcrumb for the queen. The eggs of their young. Their dead.

Earlier this year, a pesticide salesman rolled up to my yard on a Segway. I was weeding my garden by hand. “Do you have ants in your kitchen like your neighbors?” he asked.

“I do!” I replied, lying, because it was shoulder season and thus too early for them. “I love ants!” His face fell.

“OK, thank you.” He sped off and never came back.

Eight months into the year, and I still have an altered sense of time. Work blends into life, life into work, weekdays into weekends, mornings into nights. But nature cues me to a more overarching change, that of the seasons. I know fall is coming when the lower slant of sunlight appears more gold than blue. Wizened by a long, hot summer, the trees are no longer a naive spring green. The twenty-four-hour soundtrack of crickets and cicadas becomes white noise. And the ants, they leave tomorrow. All these years, their internal clocks have never varied, and with the exception of a few late sleepers, they will depart my kitchen on September 1.

In October, it will be persimmon season. Two trees on Proctor Street will drop their fruit. The sidewalk will become slippery with crushed flesh of the fruit the color of orange mud. The bees will gorge themselves on a persimmon binge. And then winter, with its short days and long nights. And then spring, when it will be mulberry season again.

I recently visited Leon Jeffers in Maplewood. I scraped the lichens off his headstone and learned he was born in June 1870 and died on August 10, 1904. So young, just thirty-four. Below the dates were carved these words: “‘Twas hard to give thee up, but the will o’ God be done. Gone but not forgotten.”

Until then, I had been so enraptured by the mulberries that I hadn’t noticed the remnant of another grave embedded in the grass close by. The headstone was missing, but presumably the grave belonged to Leon’s wife, Mariah Fitzgerald Jeffers.

Leon and Mariah, soil and sunlight, thank you for comforting me in a pandemic with the sweetest mulberries in Durham.

Lisa Sorg is an award-winning journalist and environmental reporter for NC Policy Watch, a statewide digital media outlet. She discovered her love of nature as a child in rural Indiana, where she grew up in a nineteen-acre woods, surrounded by cornfields.