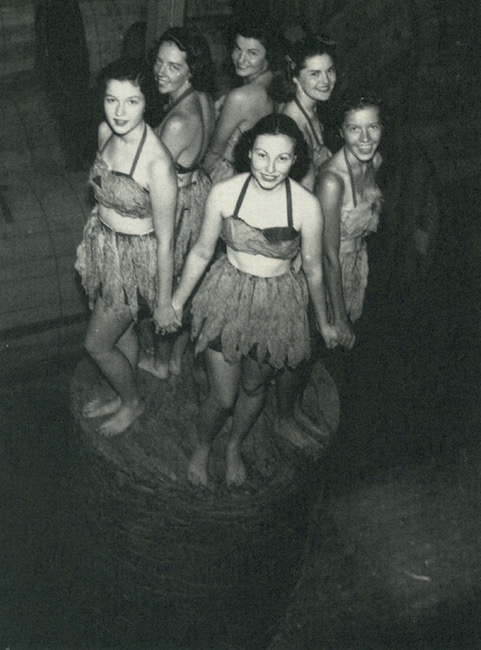 Across the Depression-era South, rural women made creative use of tobacco leaves to compete for a new kind of crown. Wilson Tobacco Festival, June 1938, courtesy of the North Carolina Office of Archives and History, Raleigh, North Carolina.

by Blain Roberts
Southern Cultures, Vol. 12, No. 2: The Tobacco Issue

"'All decked out in tobacco leaves,' the caption read, 'she might be aptly termed Miss Venus.'"

In August 1937 the tobacco warehouses in Wilson, North Carolina, opened their doors to area tobacco farmers, just as they had each year since 1895. But that summer there was a new attraction in town—the first ever Wilson Tobacco Queen, a young woman recently crowned to reign over the annual tobacco marketing season. Though beautiful and radiant, the Wilson queen was hardly unique. At the height of the Great Depression, tobacco queens had suddenly become all the rage. Danville, Virginia, had sponsored its first tobacco-queen contest in 1934; South Boston, Virginia, followed in 1935. In the mid to late 1930s, nearly a dozen brightleaf-tobacco market towns in Virginia, North Carolina, South Carolina, and Georgia inaugurated queen competitions, and a curious new icon of rural white womanhood took root in the agrarian landscape. Across the Brightleaf Belt, tobacco queens ruled.