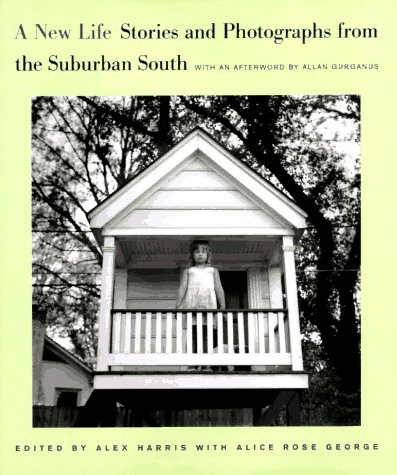 This elegant and lavish anthology, published by Double Take magazine in cooperation with Norton, boasts eleven suburb photographic portfolios intermixed with fine stories by several of the South’s best writers. It also features Allan Gurganus’s deft afterword, “Toward a Creation Myth of Suburbia.” What it lacks, however, prevents it from being the defining document it seeks to be. That lack beings with the introduction, which proves talent in one art does not yield talent in another, and begs the question: Who edits the editor? Alex Harris, who over his career has demonstrated excellence as both a photographer and an editor of photography, ruins his own anthology in several key ways. He uses pseudo-statistics loosely, demonstrates an inexcusable ignorance of contemporary southern fiction, makes gross overstatements, and has, it seems, more interest in his self than in his subject, which explains, in part, why he makes thirty references to himself in the short, four paragraph beginning of his eight-page introduction. He may know photography, but anyone who makes the claim, in 1997, that “the bulk of contemporary Southern novels and short stories” has us “stuck in the legendary past of antebellum homes, poor black servants, struggling white farmers, river baptisms, clear moonshine, sadistic servants, and inbred mountaineers” has ignored Algonquin Press’s canonical New Stories of the South for eleven years, as well as virtually every decent magazine coming out of the region. He has confused a generalized, clichéd mainstream media portrait of the South with what he’s read, although he makes plenty sure- reminding us twice in the introduction- that he’s read “hundreds” of stories over the last two years. “Thousands,” he notes, have been written since 1990, yet “only a few hundred had suburban settings”- implying that he’s done the work that revealed this pseudo-stat.