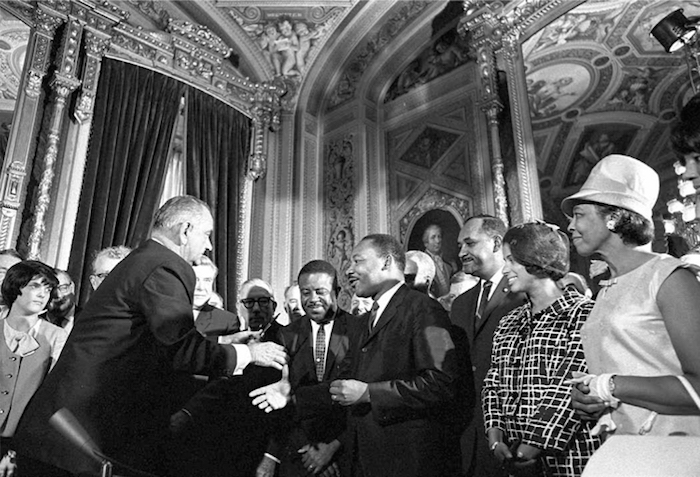 The partisan transformation in the South coincided with, and was certainly influenced by, the modern Civil Rights Movement and the substantial increase in African American political participation following the 1965 Voting Rights Act. Likewise, landmark Supreme Court rulings in the 1960s affirming “one person, one vote” helped shift the power in state legislatures away from rural areas toward urban and suburban locales. President Lyndon Johnson, Ralph Abernathy, Martin Luther King Jr., and Rosa Parks at the signing of the Voting Rights Act on August 6, 1965. Photograph by Yoichi R. Okamoto, Lyndon Baines Johnson Library and Museum.

"At mid-century, the South had no Republican senators and only two Republicans in the 105-person southern House delegation. By 2000 [both] delegations were majority Republican."

You don’t have to be a historian, a political scientist, or even a particularly astute political observer to know that the South has moved from one-party Democratic control to a competitive and increasingly Republican region. Although this basic storyline is well known by folks on both sides of the Mason–Dixon Line, the picture becomes a good deal muddier from there. There is a healthy debate about how quickly this partisan shift occurred, why it occurred, the extent to which it has “trickled down” to lower offices, the policy implications of partisan changes, and of course, what the future holds for the region’s politics. Although we can’t answer all of these questions in a single essay, we do want to tackle a few of them in the context of one important, but understudied political institution: the state legislature. State legislators are vitally important political actors who have tremendous power over the lives of their constituents. In addition, partisan change in state legislatures can provide some important clues to help us better understand the past and future of partisan politics in the American South.