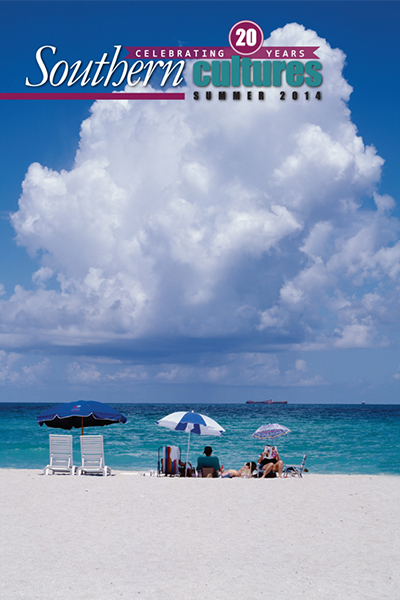 Ghost trains, lost women, and strong drink—plus, the politics of music, mourning, and the modern South. The Summer 2014 issue looks at public and private stories of love and betrayal, of honoring the dead, of coal camp memories and family histories finally written.

"One of the challenges—and, simultaneously, deep pleasures—of studying the South is that the disciplinary walls of the academy neither contain nor constrain the work."

This article first appeared in the Summer 2014 Issue.

"When train number nine on the Western North Carolina Railroad tumbled off Bostian's Bridge in 1891, it ignited a media frenzy, as well as a firestorm of outrage, a detailed investigation, a compelling mystery, and a series of unanswered questions."

"When the unlimited energy of adolescence comes to bear on the limited experience of childhood, the results often swing toward one of the poles - an enthusiastic confirmation of the culture a child grew into or a bold rejection of the culture they grew out of."

“The Best Notes Made the Most Votes”: W. C. Handy, E. H. Crump, and Black Music as Politics

by Mark A. Johnson

"'Feet commenced to pat. A moment later there was dancing on the sidewalks below. Hands went into the air, bodies swayed like the reeds on the bands of the Congo.'"

"At mid-century, the South had no Republican senators and only two Republicans in the 105-person southern House delegation. By 2000 [both] delegations were majority Republican."

"Maggie's neighbor-women saw a young woman just like themselves, with no children to feed, trying to build a life, and so they helped her, unquestioning in recognition that she would help them in return. This was so."

"...flavored of tin from the lip of the cup of a dented thermos passed between us—"

Our South: Geographic Fantasy and the Rise of National Literature by Jennifer Rae Greeson (Review)