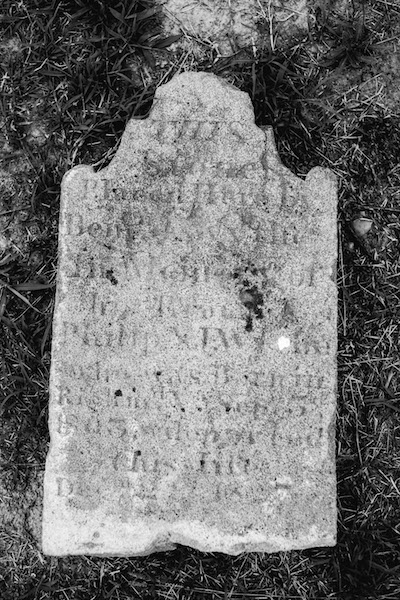 “For a city built on slavery, in what was the most populous southern state, the marker offers a portal through which to see what W. E. B. DuBois called ‘the strange meaning of being black.’”

The headstone marking the grave of Philip N. J. Wythe now lies flat on its back, face to the sun, partially hidden among the tall grasses at the Barton Heights Cemeteries in Richmond, Virginia. The marker’s form is deceptively simple. Made of coarsegrained sandstone, it features no pictorial symbols, no death’s head or cherub or weeping willow. Rather, its primary decoration comes in the form of its inscription. Blocky, even letters fill the entire face of the stone:

THIS
Stone is
Placed Here by
Benjmn Wythe
In Memory of
his Brother
Philip N. J. Wythe
who was Born in
Richmd Va Sept 3d
1803 & departed
this life
Decm 24th 1827

Above the lengthy inscription, baroque lines divide the top of the stone into three sections—two smaller shoulder caps leading up to a central, rounded tympanum. Taken in its entirety, the marker is an embodiment, as its namesake was an embodiment, of the interconnectedness of southern history. Overlooked today, it challenges us to engage with the southern past in a way that few other artifacts can.