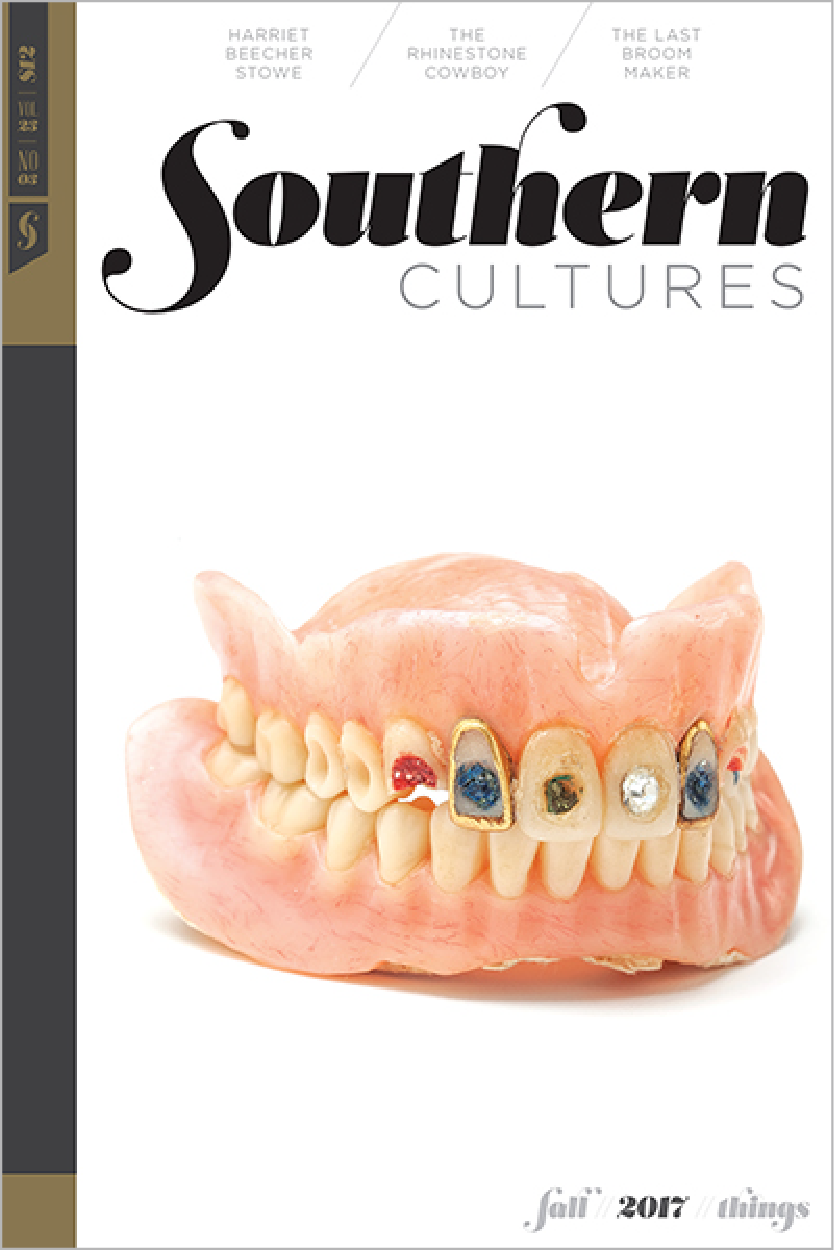 Mississippi’s Rhinestone Cowboy. West Virginia’s last commercial broom-maker. Harriet Beecher Stowe’s orange grove. And all sorts of other southern things. Guest edited by Bernie Herman, we think this issue is pure gold (if the glitzy cover didn’t give that away).

"Southern things are speaking up. They say, ‘Listen. Pay attention. Do something.'"

"Material culture is best understood as the history and philosophy of objects. It proceeds from the idea that objects, tangible and imagined, locate the entirety of human experience and understanding.”

by Wendel A. White

MANIFEST was featured in our recent issue on southern Things (vol. 23, no. 3). Join Wendel White at an exhibit opening & artist's talk on February 21st, 6:00–8:00 PM, at the Center for Documentary Studies at Duke University.

"So serious about her orange business, she even created her own crate labels, advertising: ‘ORANGES FROM HARRIET BEECHER STOWE—MANDARIN, FLA.’”

“For a city built on slavery, in what was the most populous southern state, the marker offers a portal through which to see what W. E. B. DuBois called ‘the strange meaning of being black.’”

“When the basket/bowl vanished, the loss was blamed, naturally, on General Sherman.”

Can A Gas Station Remember A Murder?

“Ben Roy’s reveals the fickleness of southern things: while such things can bear witness to the realities of the southern past . . . in this case, the affective power of southern things hinges on their capacity to elide essential features of that past.”

“‘I don’t know about Providence, little preacher, but I do believe in rats.’”

“Made in Seagrove, North Carolina, by a fourth-generation potter, the Bridge Bowl tells the familiar story of this particular place in the Piedmont and the landscape, people, traditions, and ideas that animate it. It also tells the story of globalization.”

“The teeth are what really get people." —Loy Bowlin

"If you studied objects, you’d begin to see that they have much to teach—not only about beauty and utility, ephemerality and permanence, but also about history, about people."

“They may be French and they may be fancy, but my pots have hearts of iron after all.”

“Over the course of a few years, a fish that lurked in the muddy waters of the bayou and was once described by naturalist William Bartram as a ‘warlike voracious creature’ was elevated to a local celebrity status.”

NOTE: Line breaks may shift on a mobile device.