Art and Environment in the New Deal and New Millennial South 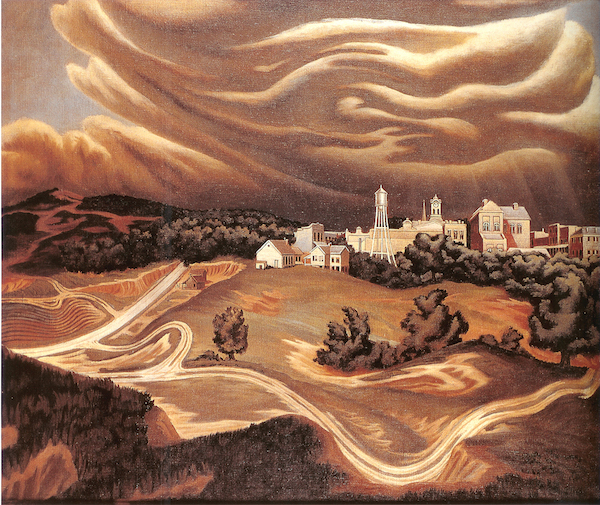 John McCrady, Oxford on the Hill, 1939, multi-stage on canvas. Courtesy of the City of Oxford, Mississippi.

Art and Environment in the New Deal and New Millennial South

“With the crisis of global warming and its attendant rise of ocean waters and increase of extreme weather patterns, more southern artists will undoubtedly find cause to comment on the earth’s dramatically changing physical landscape.”

In late spring 2016, Louisiana artist Monique Verdin arrived in the Netherlands for the annual shareholders’ meeting of Royal Dutch Shell armed with an impassioned message and a collection of her black-and-white photographs. The images, displayed as individual large-scale banners, revealed petrochemical plants looming over the wasted landscape, seasonal floods inundating impoverished neighborhoods, and denuded trees suffering the effects of toxic soils. A descendant of the indigenous United Houma Nation, Verdin had captured the scenes over a twenty-year period while documenting the oil and gas industry’s ruinous impact on her ancestral homeland in southeast Louisiana. The contamination of the state’s coastal waters and dredging of the fragile wetlands, she discovered, had left the tribal communities living along the Gulf of Mexico particularly vulnerable. With the rapid erosion of barrier marshes and encroachment of oil-slicked water upon homes, schools, and businesses, residents—including the artist herself—now confront the possibility of forced relocation and a dissolution of their way of life. Verdin’s graphic images may ultimately come to offer the last material evidence of the land’s existence.