Race and Reunion: The Civil War in American Memory (Review) 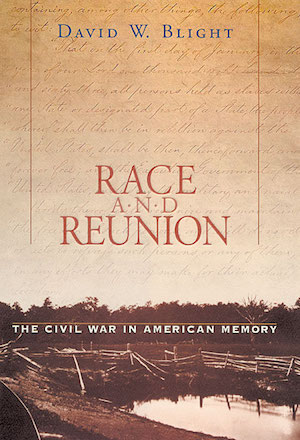 Race and Reunion: The Civil War in American Memory, by David W. Blight (The Belknap Press of Harvard University Press, 2001).

Race and Reunion: The Civil War in American Memory (Review)

America has an inexhaustible store of anecdotes about the Civil War, but here’s one that never made it into the nation’s collective memory. In May 1865 African American troops marched toward Smithfield, North Carolina. When they came to the Neuse River at the edge of town, they found the bridge burned. Local white women watched these black soldiers from windows, doorways, and yards. The soldiers “would disrobe themselves, hang their garments upon their bayonets and through the water they would come, walk up the street, and seem to say to the feminine gazers, ‘Yes, though naked, we are your masters.'” Their chaplain, Henry McNeal Turner, “was much amused to see the secesh women watching with the utmost intensity, thousands of our soldiers, in a state of nudity. I suppose they desired to see whether these audacious Yankees were really men, made like other men, or if they were a set of varmints.” As far as we know, this vignette was never recounted at the monthly meetings of the Smithfield chapter of the United Daughters of the Confederacy. Instead, the nation was creating a segregated historical memory to suit its segregating society, and stories like this and others that focused on African Americans were excluded from the conventional narrative. Today’s monotonous debates about Confederate symbols reflect that limited vision of what the Civil War can mean. David W. Blight’s Race and Reunion: The Civil War in American Memory takes us back a century to a time when the nation was debating these same questions for the first time.