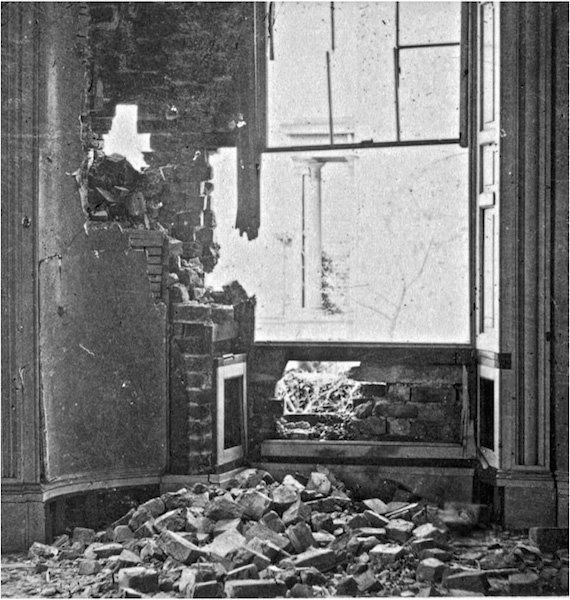 A parlor window on Bollingbrook Street, Petersburg, Virginia, 1865, where a shell from the Union batteries struck, courtesy of the Library of Congress.

"'The war is surging up close about us. - O . . . if I could put into your and every true woman's heart the inexpressible loathing I have for it! If you could only see the other side enough to see the wrong the tyranny on both!'"

The decades leading up to the Civil War were fabulously rich ones for American literature—an “American Renaissance” in the words of literary scholar F. O. Matthiessen. During this era, some of the nation’s writers—notably Harriet Beecher Stowe, but also Henry David Thoreau and John Greenleaf Whittier—weighed in on the wedge that was driving North and South apart in works such as Uncle Tom’s Cabin and “Slavery in Massachusetts.” The war itself, however, inspired no Iliad or Aeneid, at least not at the time it was going on. The closest thing to a classic literary account of the American Civil War is The Red Badge of Courage, written decades later by Stephen Crane, who had not even been born when the war occurred. A few other notable responses include Drum-Taps, inspired by Walt Whitman’s experience working as a nurse in Washington, D.C., and Mark Twain’s account of his short stint as a Confederate soldier in “The Private History of a Campaign That Failed.” Where were the rest of America’s great writers when this grand subject was calling for literary treatment? Some, such as Thoreau and Edgar Allan Poe, did not live to see much or any of the war. Others—Stowe, Ralph Waldo Emerson, Nathaniel Hawthorne, Emily Dickinson, Herman Melville—were simply someplace else, hundreds of miles away from the fighting, in Massachusetts or New York. One American writer, however, had an intimate acquaintance with the war, and she did not have to leave home to acquire it.