Black Women, Midcentury Domesticity, and the Films of the Georgia Department of Public Health 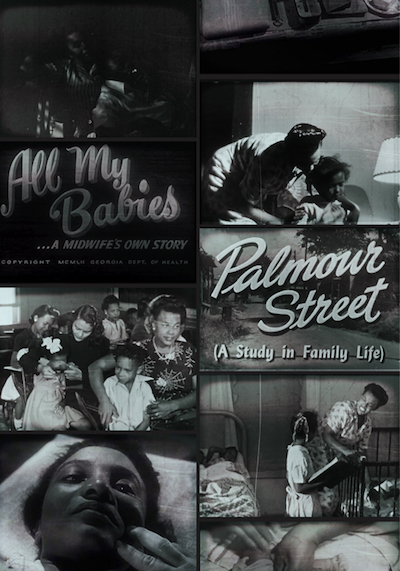 Black Women, Midcentury Domesticity, and the Films of the Georgia Department of Public Health

“If we refuse to overlook the . . . exploitation of black women to modernize midcentury public health, we may grasp something of what it means to imagine and create Souths that embrace difference.”

In the early 1950s, the Georgia Department of Public Health (gdph) sponsored two films documenting black women living and working in rural Georgia. In contract with documentarian George Stoney, the gdph partially funded and copyrighted Palmour Street: A Study of Family Life (1950) and All My Babies: A Midwife’s Own Story (1952), films for health instruction shot on location in segregated communities and intended for black audiences. The films circulated in educational and documentary markets beyond the state due to Stoney’s personal ambition and respected reputation as a filmmaker, which likely played a role in their preservation and accessibility today. Both films are now in the public domain and can be streamed online via the U.S. National Library of Medicine YouTube channel. The gdph films’ rare images of black mothers and midwives in the Jim Crow South reveal intersections of institutional power, notions of health, and racial and gender politics in the region at midcentury. As black women in Palmour Street and All My Babies bear contradictory expectations for domesticity in the GDPH’s promotion of modern public health, their presence in these now digitally accessible films exposes how the GDPH used moving images to mediate racial and gender difference. The films today provide an opportunity to look backward—to chart the contours of a lesser-known screen vision of the South sponsored by the GDPH—but also to move forward—to reclaim voices, experiences, and spaces that were exploited to create a South that was “useful” for the institution in the 1950s.