“The teeth are what really get people." —Loy Bowlin

Loy Bowlin’s bejeweled dentures—a different color rhinestone on each tooth, two front teeth framed in gold—were a prelude to his creative output. Born on a cattle ranch in Franklin County, Mississippi, in 1909, Bowlin was a shade-tree mechanic and former used car salesman, who, upon retiring, took on a persona as McComb, Mississippi’s “Original Rhinestone Cowboy,” with a sparkling Western suit for each day of the week and a highly ornamented blue 1967 Cadillac to match. Inspired by Glen Campbell’s 1975 hit recording, and, depending on what version of the story—divine intervention—Bowlin became compelled to adorn everything he touched. In doing so, he was able to move beyond a life previously characterized by divorce and depression and into a bold new existence that drew people closer to share in his sense of joy and wonder.1

I first saw Loy Bowlin’s gleaming smile in a book produced by the John Michael Kohler Arts Center in Wisconsin, where his dentures now have a catalog number, just like the many parts that make up his glittering magnum opus, the Beautiful Holy Jewel Home—his modest two-bedroom home, covered inside and out in near-Moorish bejeweled patterns. As a former Nashvillian with family roots in Hollywood show business, I was familiar with Bowlin’s aesthetic in Nudie Cohn’s adorned “Nudie Suits” of the 1960s and 70s, seen on many a country star from the South to the Golden West. And when I moved to Jackson, Mississippi, in 2014 as the folk and traditional arts director for the Mississippi Arts Commission, Bowlin’s world in nearby McComb became increasingly remarkable to me; I wanted to know more about the place that produced “Rhinestone.”

Bowlin became compelled to adorn everything he touched.

An oral history project on the life and work of Bowlin began to take shape with a list of potential interviewees: The reverend at Bowlin’s church, his next-door neighbor, his many younger visual artist friends who contributed to his work, remaining family members, and, of course, the dentist responsible for his sparkling grin. After I began to visit with the Bowlin family and other local people in McComb, the research took on a broader function in support of a 2017 exhibition of Loy Bowlin’s work, which is currently on view at the Kohler Arts Center, and includes his bejeweled home.2 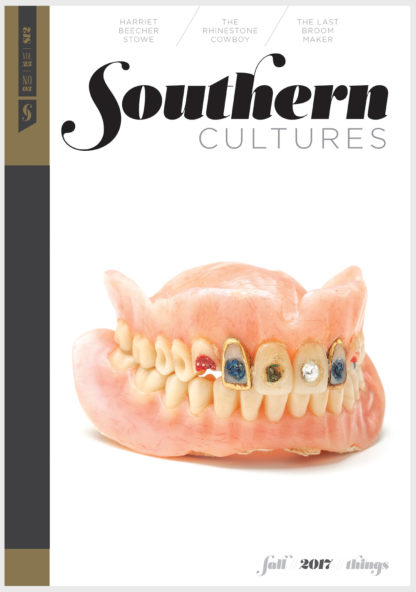 Our "Things" issue debuts later this month—join us on Oct 26 for the launch party. 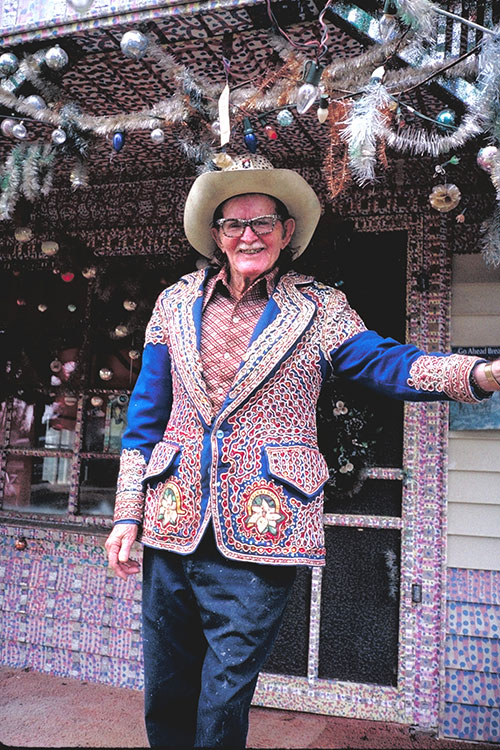 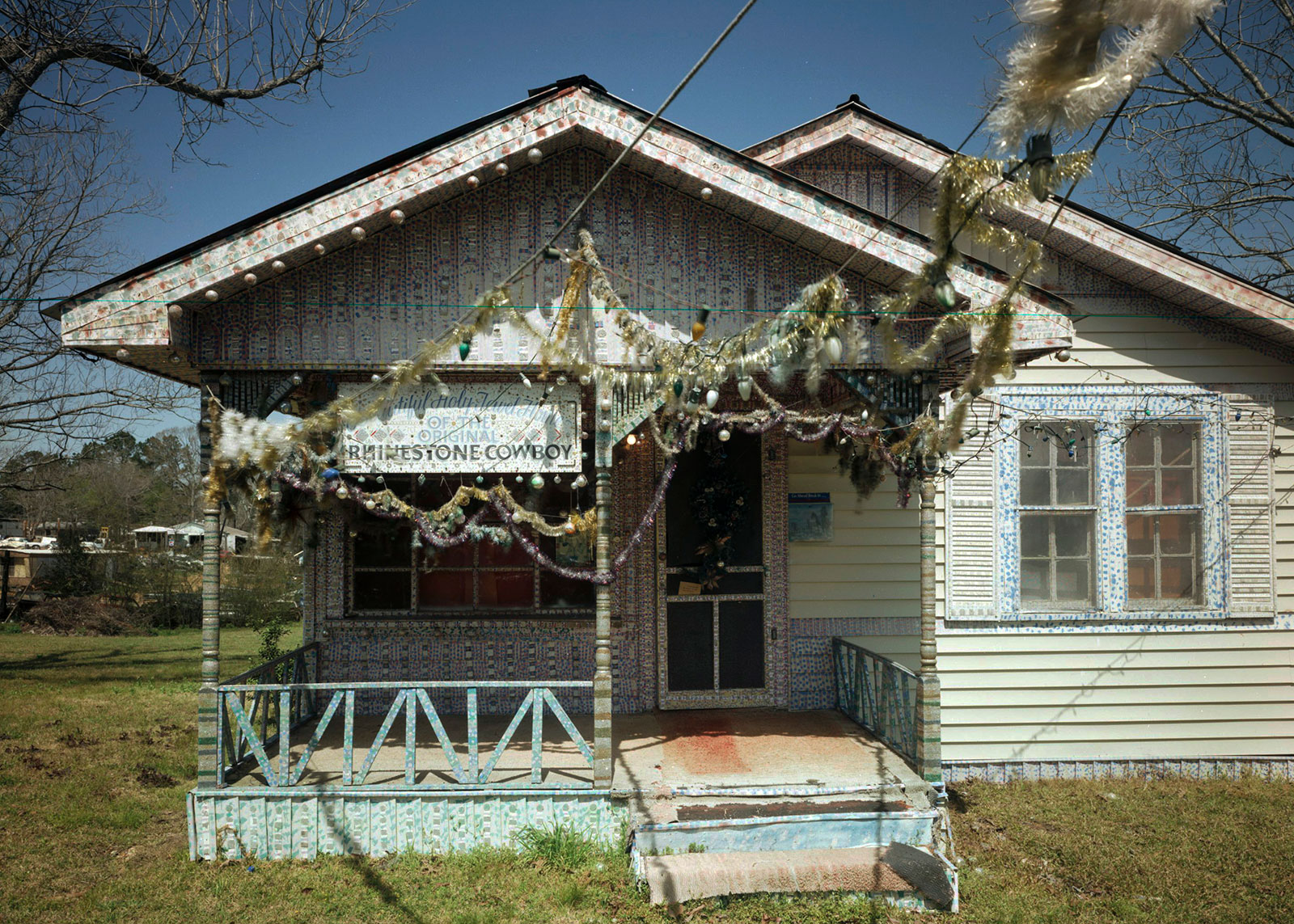 In the 1970s, before Bowlin embellished every inch of his home with bright patterns, collaged in paper cut-outs and glitter, he was a fixture in a pedestrian mall called Sunshine Square. “The World’s Most Famous Entertainer,” McComb’s buck-dancing, joke-telling, harmonica-toting Rhinestone Man began his act in response to feelings of isolation. Suited up, he would make new friends, tell stories, dance a little, and occasionally sell autographed pictures of himself on a palomino for a buck-fifty apiece. “The teeth are what really get people,” proclaimed Bowlin in a clipping from the Times-Picayune.3

Local people in McComb experienced Rhinestone’s larger-than-life world through his dazzling aesthetic choices, often combined with his entrepreneurial inclinations to define and design his own brand and emerging career—less as an artist, and more as an entertainer. A significant paper trail reveals Rhinestone’s interest in taking his act to Hollywood, marked by various successes and failures, from a cameo in Harrod Blank’s 1992 documentary film Wild Wheels, to a kindly worded rejection letter from the Tonight Show with Johnny Carson. Bowlin also commissioned a series of theme songs set to popular country styles (with lyrics he likely penned himself, but that were recorded by professional studio musicians). One tune memorializes a number of Rhinestone motifs:

This is a song about the King
The Original Rhinestone Cowboy
As he walks down the streets of Sunshine Square
The children holler, “Mama, look, there’s the Rhinestone Man.”
He has diamonds in his teeth, and rhinestones in his boots
He shines, he glitters, he’s a walking shining star
He’s the dream of every little boy and girl
They’d like to grow up and be just like the Rhinestone Cowboy
He’s true, he’s real, he’s the American Dream 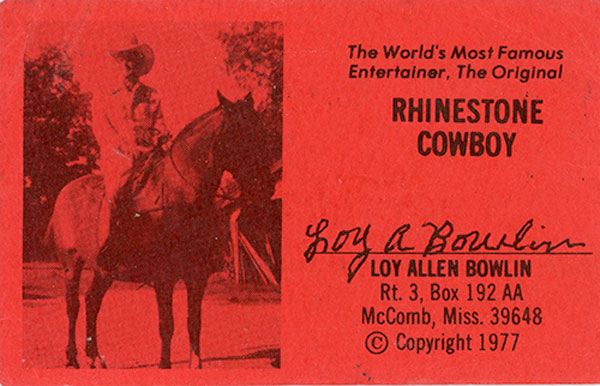 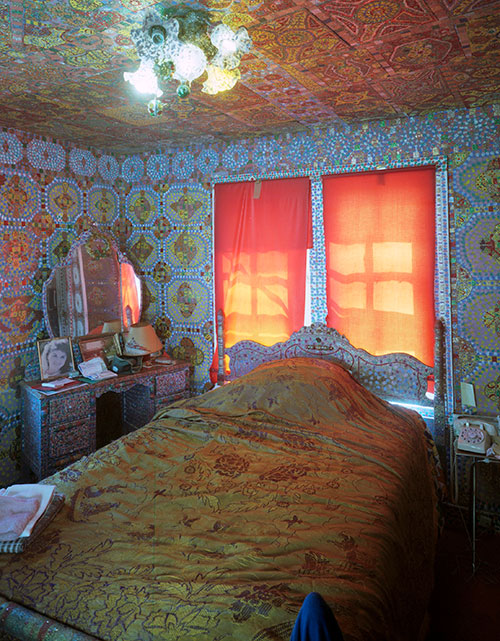 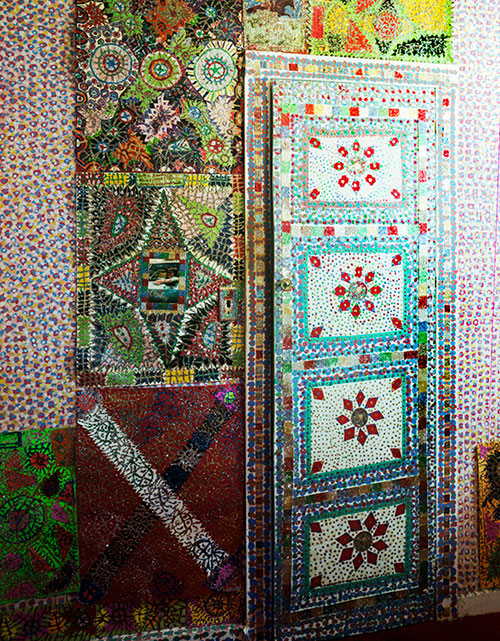 He retreated to adorn every inch of his small home...

When Bowlin’s health started to decline around 1980, he moved away from the public square, and retreated to adorn every inch of his small home off Highway 51, in hopes of bringing his fans and friends directly to him. Vivid dreams inspired a result that was nothing short of cathedralesque. A community of emerging artists, many of them generations younger than Bowlin, became steadfast in their loyalty and support of him. Paul Maurer and his grown children Christina and Saul Maurer, who ran a sign-painting shop and studio, were frequent collaborators, contributing hand-lettering on Bowlin’s house and car or paintings of magnolias on his customized suit jackets. There became a symbiotic relationship between the artists: Rhinestone would bounce ideas off the Maurers for feedback and affirmation, and they would draw inspiration from his creative practice in turn. In a 2016 interview, Christina Maurer recalled her father’s relationship with Bowlin: “I think being an artist, himself—it’s all about risk. Like, ‘What kind of risk are you going to take with your work today?’ And he would just fall down at the feet of Rhinestone and go, ‘Yeah, this is really cutting edge, risky.’”

When I visited McComb, local people were generous in sharing their memories, personal photographs, newspaper clippings, and a few remaining works of art, but the story of who may have helped Bowlin with his dentures remained elusive. A number of community members had theories that he may have personalized his smile independently, while others knew his most successful aesthetic accomplishments were collaborative. It was only toward the end of the project that Gregg Harbison, one of the community interviewees, thought to reach out to his uncle, a retired dentist named Jimmy McDonald. He was the guy who made Loy Bowlin’s glittering dentures a reality. Dr. McDonald’s work was unorthodox, but a meaningful gesture of confidence for Bowlin’s creative spirit, and one that led to extraordinary results. Only a handful of days after getting that call I was down in Dr. McDonald’s kitchen to hear his story.4 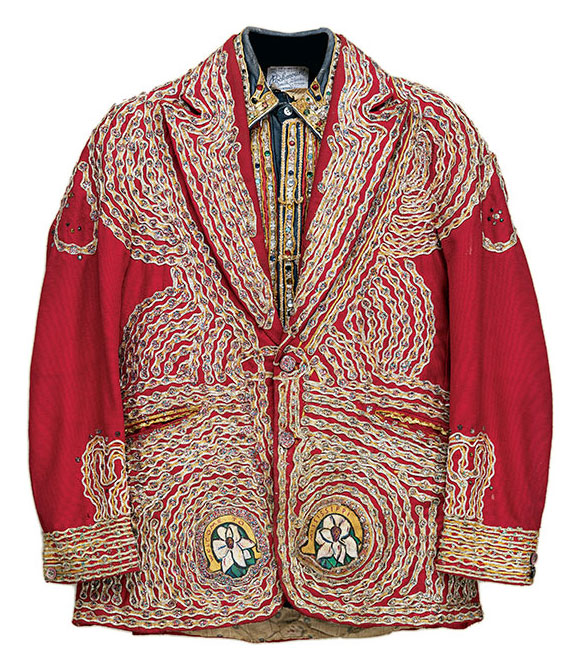 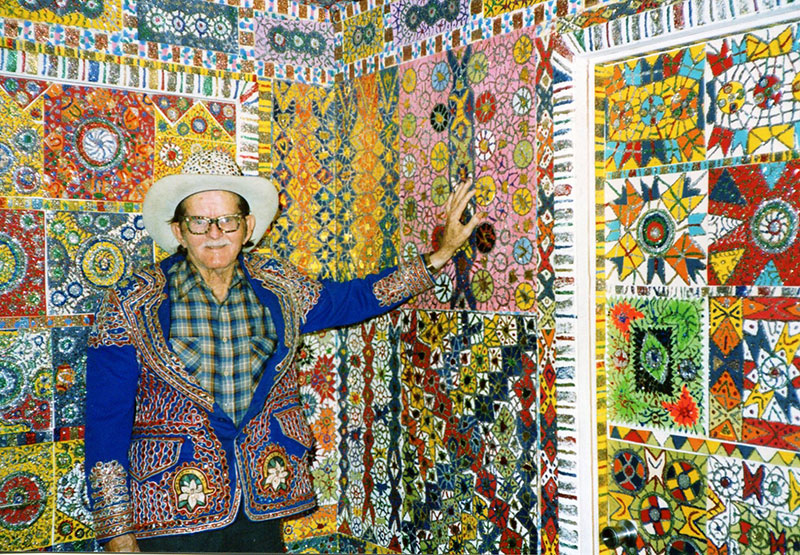 Jimmy McDonald: I came back from the Army in about 1963 and started a practice here in McComb on Delaware Avenue. It just so happened that two doors down from me was the K&B—Katz and Besthoff Drugstore—and there was a guy that would stand out there and dance around and play harmonica. I found out he was the Rhinestone Cowboy.

“Mr. Bowlin, would you like to have some rhinestones in your teeth?”

I had a call from the Salvation Army. They would bring patients to me, and I would give them a cut—about half-price for extracting teeth, and making or filling teeth, whatever. They called me and said, “Dr. McDonald, we have Mr. Bowlin here,” and I had no idea it was the Rhinestone Cowboy. So, I said, “Well, bring him on in.” He had a few teeth left, and I took those out, and he needed to have some teeth, so I made him some teeth. Well, the day before I made the impressions, I told him, “Mr. Bowlin, would you like to have some rhinestones in your teeth?” And he said, “Well, God bless you, Doc. Can you do that?” I said, “Well, I sure can. You just bring me some rhinestones and I’ll put ’em in those teeth for you.” He said, “God bless you, Doc, I’d love to have that done!” It was just no big deal, I just happened to think about it—you might as well have rhinestones in your teeth if you got them everywhere else. I didn’t know he had them all over his house, too! [laughter] 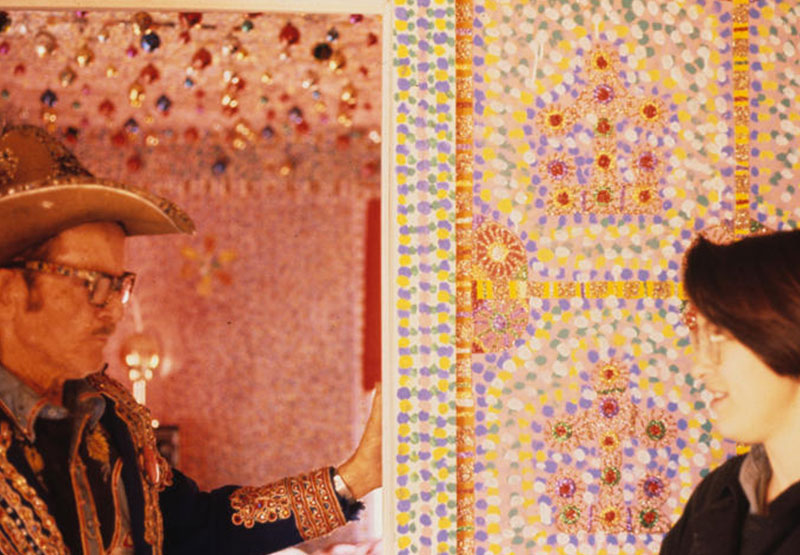 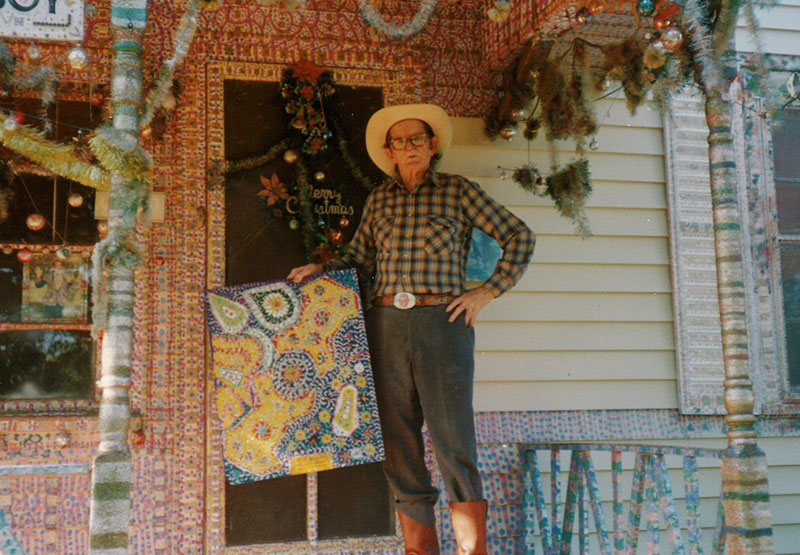 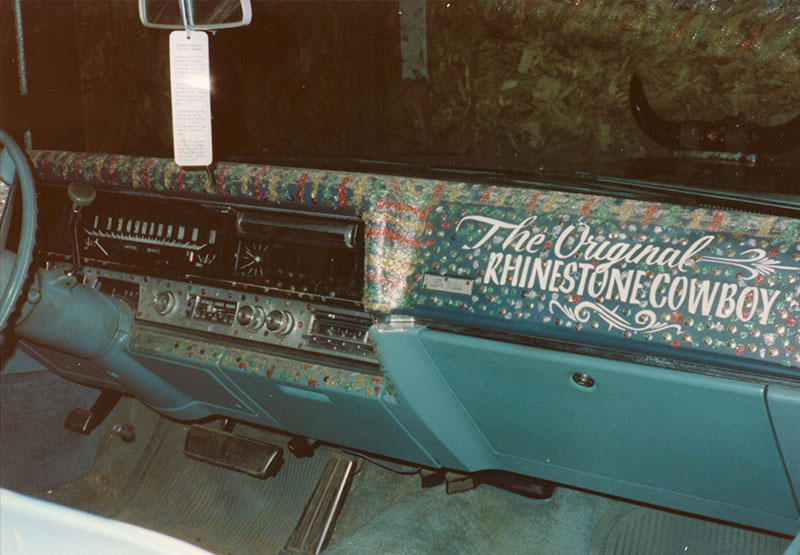 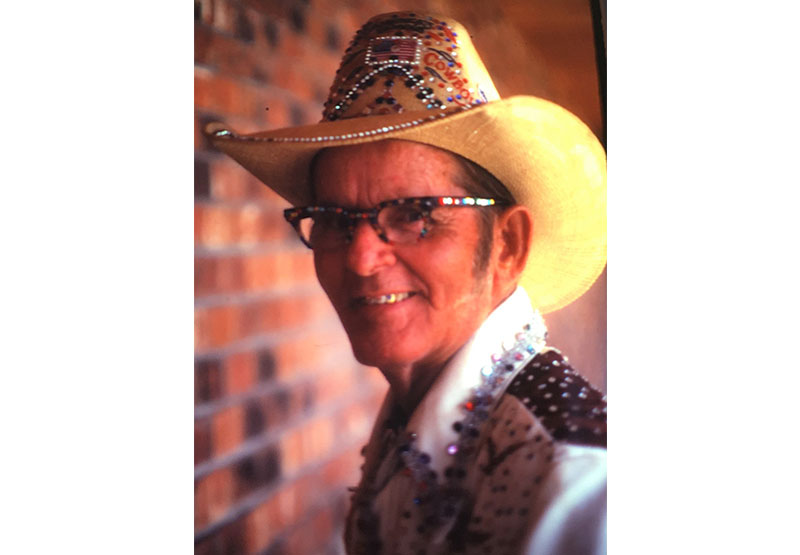 At the Real People screening, 1980. Photo by Michael Williamson. 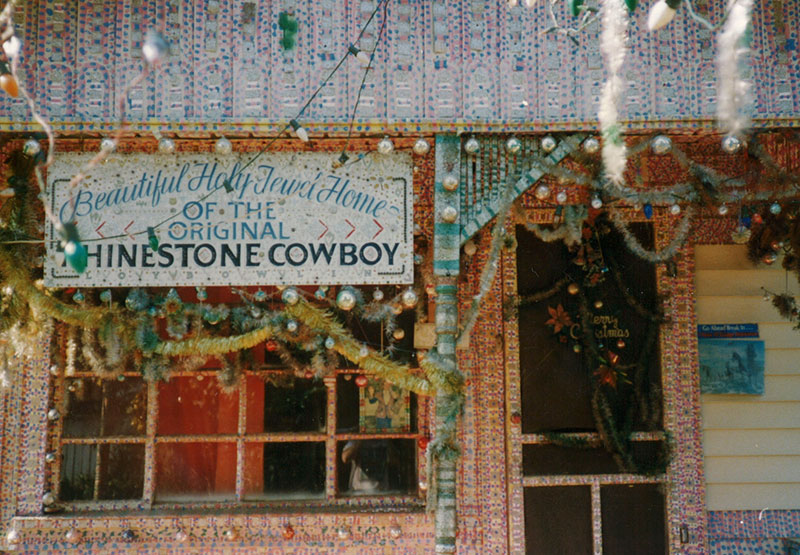 So, I had him bring me some rhinestones—all sizes and shapes—and had him leave them with me. When I got those teeth back from the lab, I got a burrow about three millimeters across and made a contoured cavity in the front of each one of the teeth, and I got some regular superglue and put them flush with the tooth surface and glued them in! Well, I showed Rhinestone how to do that; I said, “Some of these things are gonna come out. When it comes out, clean it out with your pocket knife, put a little superglue in there, and stick your rhinestone back in there.” He would come back to have me adjust his dentures—like most all people have to do—but Rhinestone would hang in there, pretty good, and he learned how to re-glue them all the time. I wouldn’t have done it with real teeth, because to drill into real teeth, you’d hit the pulp. So, dentures would be the only way I’d do that.

[The rhinestones] were kind of V-shaped on the bottom, so you had to make a contour deep enough so you could seat that rhinestone in there flush, so it wouldn’t stick out and bother his lips. So, I got that done, and he did real good. Every time I’d see him he’d give me the big smile with all those rhinestones. I enjoyed doing that, and I didn’t know that his fame had gotten out of McComb, hardly, much less all over the country, and when they told me that somebody dismantled his house and took it to Wisconsin, I thought, “Well, my gosh! Unbelievable.”

[Real] People Magazine [an NBCnewsmagazine] called me from Baton Rouge, and said, “Dr. McDonald, would you let us come up and film you and the Rhinestone Cowboy?” And I had been catching the devil from some of my friends for putting rhinestones in Rhinestone’s teeth, and so I thought, “I don’t need that kind of advertisement right now.” But looking back, I think it would’ve been a good idea to have [the] magazine come in and make that picture. I never put any jewels in any people’s teeth! I usually did gold, amalgam, white filling, and so forth. That was the first time I ever did that—and the last time, too!
He could open his mouth when he was doing his ditties, and playing his harmonica, and smile at people, and, boy, they’d just crack up with joy when they’d see those stones in his teeth. And that’s one of my claims to fame! [laughter] Everybody loved him to death. I guess he didn’t have a desire to get a big education, or anything, but he was just happy to be who he was. And he was the Rhinestone Cowboy, and everybody knew it. He took it, and made his own way. 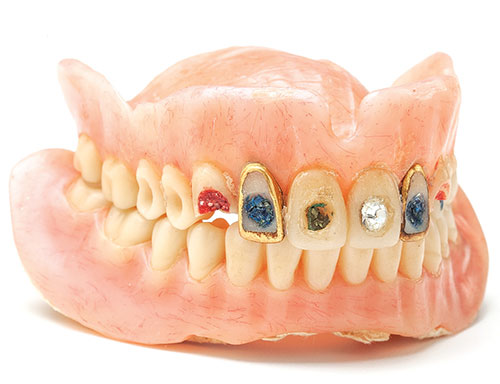 The exhibition The Making of a Dream: Loy Bowlin + Jennifer Joy Jameson is on view now through March 31, 2018 at the John Michael Kohler Arts Center in Sheboygan, WI. Visit the exhibition website.

Jennifer Joy Jameson is a public folklorist and cultural organizer with an interest in documenting the ways culture shapes creativity, especially in rural spaces. She directed the Folk and Traditional Arts program at the Mississippi Arts Commission from 2014 to early 2017, and now works with the Alliance for California Traditional Arts in Los Angeles. Jameson also works with SPACES Archives, a non-profit archive established in 1978 to document and advocate for the preservation of art environments around the world. From 2015–2017, Jameson partnered with local people in McComb, Mississippi, for the John Michael Kohler Arts Center’s exhibition of Loy Bowlin’s Beautiful Holy Jewel Home, titled “The Making of a Dream: Loy Bowlin + Jennifer Joy Jameson” (2017–2019).