Perspectives of Change on the North Carolina Coast

“‘I know God said He was not going to flood the earth no more, and that’s true, but the floods is still coming.’”

Over sixty years ago, my grandfather was offered a sizable piece of waterfront property at the northern entrance of Buxton Village on Hatteras Island for $3,000 by his aunt, the famed village postmistress, Maude White. At the time, the parcel—no more than a half-mile wide from sound to sea—was like other parts of what is now the wild and natural National Park.

Today, travelers are welcomed to the village, which is home to the Cape Hatteras Lighthouse, on either side by several locally owned beach motels and businesses. Now assessed at over a million dollars, the land, like so many other parts of the island, is where tourists jockey for the biggest rental homes closest to the beach, where developers scalp for empty parcels on the edge of the sea, where hundreds of thousands flock to recreate on the very sand in question, and where fishermen maneuver for the best spot to soak their bait. But in the 1950s, as family lore goes, my grandfather gave the land offer no more than a few seconds thought, making known his sensible wish to stay high and dry in Buxton Woods. Uttering, “No fool would ever build on the beach,” he deemed it a poor investment.

Uttering, “No fool would ever build on the beach,” he deemed it a poor investment.

Last fall, after Hurricane Harvey, a Category 4 storm, battered the Gulf, and with Hurricane Maria, the strongest one on record barreling toward the United States, I stood on that section of beach, where a handful of shrimp boats often trawl in the distance. In the last year, those boats have been joined by a lonely dredge and hundreds of yards of rusty pipe tasked with channeling millions of cubic yards of sand to the shore—a re-nourishment effort to widen the beach and, in turn, hopefully save the adjacent road, motels, and homes from being washed into the sea.

I wondered what my grandfather would have thought.

A proud descendant of Hatteras lifesaving surfmen, lighthouse keepers, and commercial fishermen, I’ve clung tightly to stories of my heritage, passed down to me by my father. Although I wasn’t technically raised on Hatteras, these are the stories that help make sense of who I am—my relationship with the environment and my sense of place. 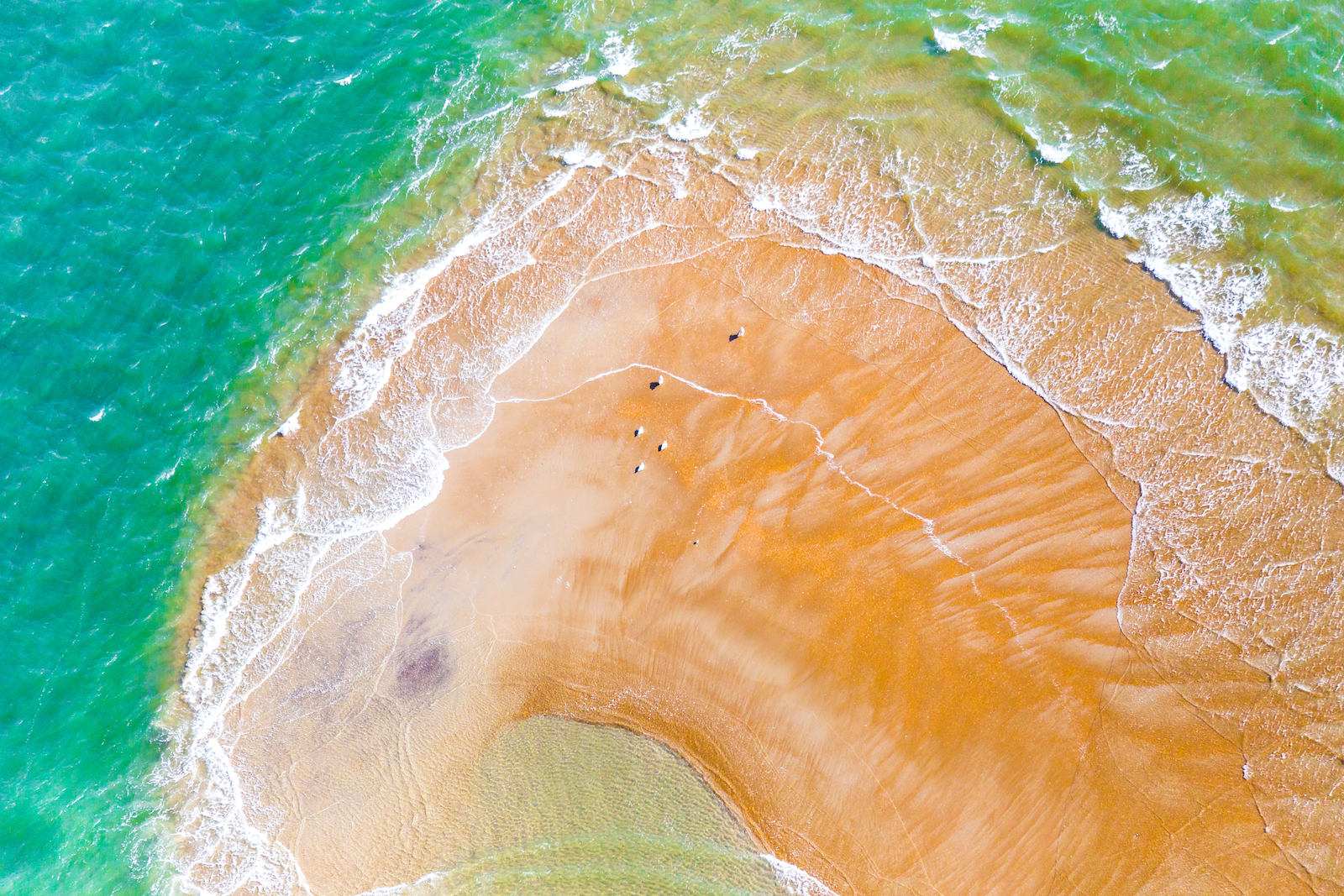 Advances in technology, engineering, and construction, along with commercial and economic realizations, have shifted our adaptive ideology on our barrier islands and across coastal North Carolina. Today, we build higher dunes and more jetties. We harden our shorelines with seawalls. We dredge our inlets and re-nourish our eroded beaches. We build our houses higher off the ground and ever closer to the water. We pave over the land underneath us and employ dikes to drain agricultural fields and protect them from saltwater. We attempt to regulate our fisheries in the face of warming water and changing migration patterns that extend some seasons and shorten others.

So what does this ever-present change mean to those who call some of the most dynamic places on earth home?

So what does this ever-present change, compounded by rising global temperatures and encroaching sea levels, mean to those who call some of the most dynamic places on earth home, the place where livelihoods depend on tourism, availability of seafood, and, further inland, an agriculture-dependent rural economy. Beyond the statistics, graphs, and projections, what are the first-hand experiences, coping mechanisms, and adaptive measures of the people living on the front lines of climate-related change? How might the stories of everyday people, business owners, commercial fishermen, farmers, and community leaders offer compelling insight into one of the greatest threats facing North Carolina? Can their stories transcend prevailing political discourse and offer an alternative perspective that qualifies the natural, cultural, human, and economic consequences of environmental change? How does their experience affect their perception of future climate-related change and sea level rise?

It is these questions that RISING seeks to explore. The project uses photograph and oral history to better understand coastal communities’ beliefs and understandings of climate-related changes and how that impacts daily life. 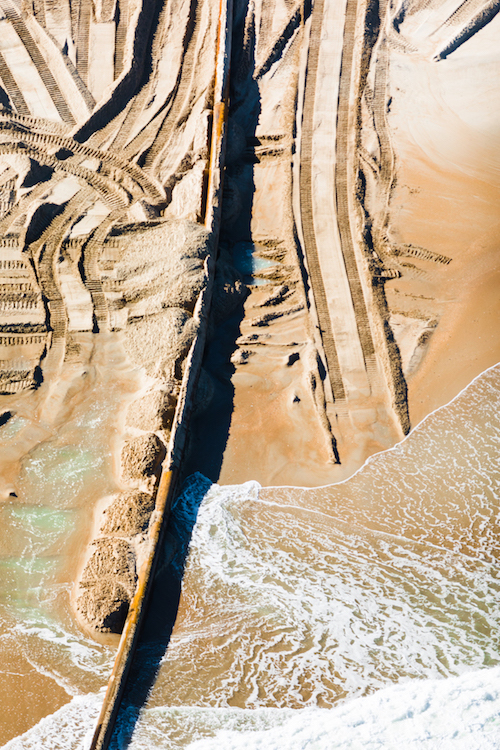 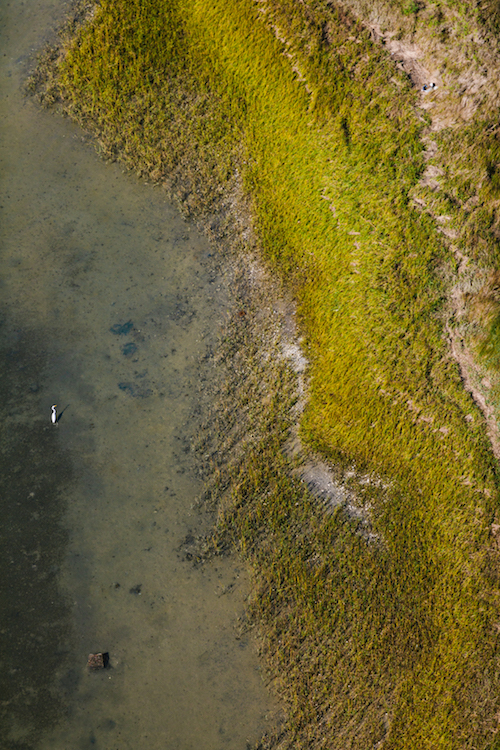 Impressions of Re-nourishment, Buxton, Dare County (left). Before 2018, high tide would regularly bring the sea up to the base of the motels at the northern entrance to Buxton Village. Storm events would usher water underneath the structures and across the road. In the summer of 2017, beach nourishment began on a 2.9-mile section of shoreline that once complete will stretch from the old lighthouse site to north of the village. At an estimated cost of $22.1 million dollars, the project will relocate approximately 2.6 million cubic yards of sand to the shore.

I don’t think anybody would think to build on it now.

Spongy Marsh, Core Sound, Carteret County (right). “I remember my grandmother’s yard in particular because I lived there for a lot of years. She has a big piece of land. When I was a little girl, I would run in that side yard and play all the time. And my daughter can’t do it now because it’s basically a swamp where Jarrett Bay is pretty much intruding inward. That ground has just become spongy marsh. I don’t think anybody would think to build on it now the way they did if they went there and looked at it.” —Lauren Salter, Williston 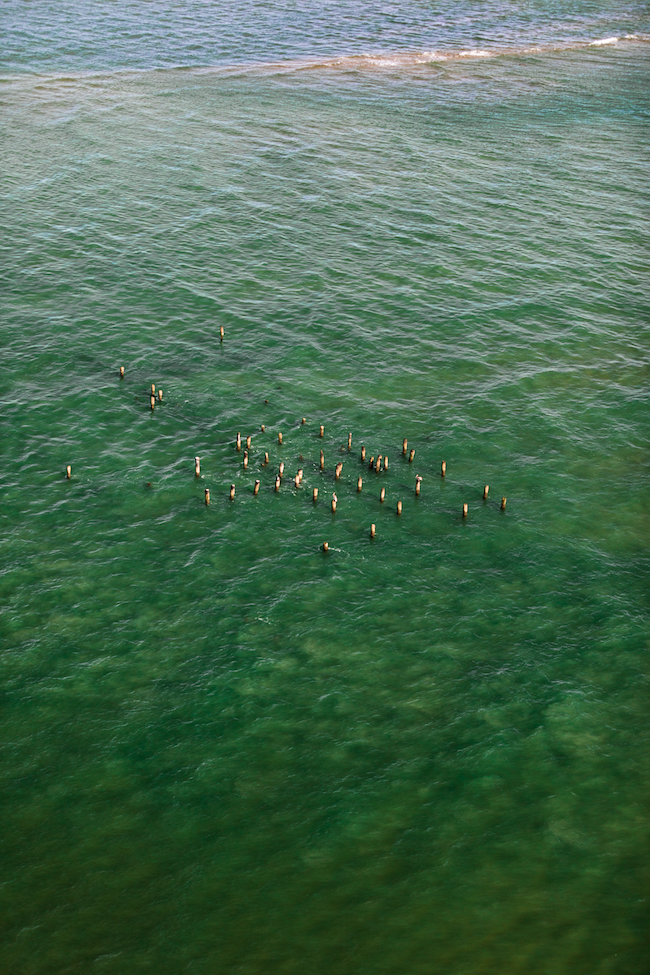 You could see the tower for a while in the water and then pretty soon nothing. Now there’s just pilings.

Remains of the Hatteras Inlet Lifesaving Station, Ocracoke, Hyde County. “I remember as a boy Hatteras Inlet Coast Guard Station was abandoned . . . because of the erosion. So we watched the sea encroach on that and take parts of the docks, the boathouse, then the main building, the tower . . . You could see the tower for a while in the water and then pretty soon nothing. Now there’s just pilings. Many years later, still got the pilings. So we watch that. We local guys watch that evolution . . . where sometimes it builds out, sometimes it erodes away. That’s been a landmark for us.” —Dwight Burrus, Hatteras Village 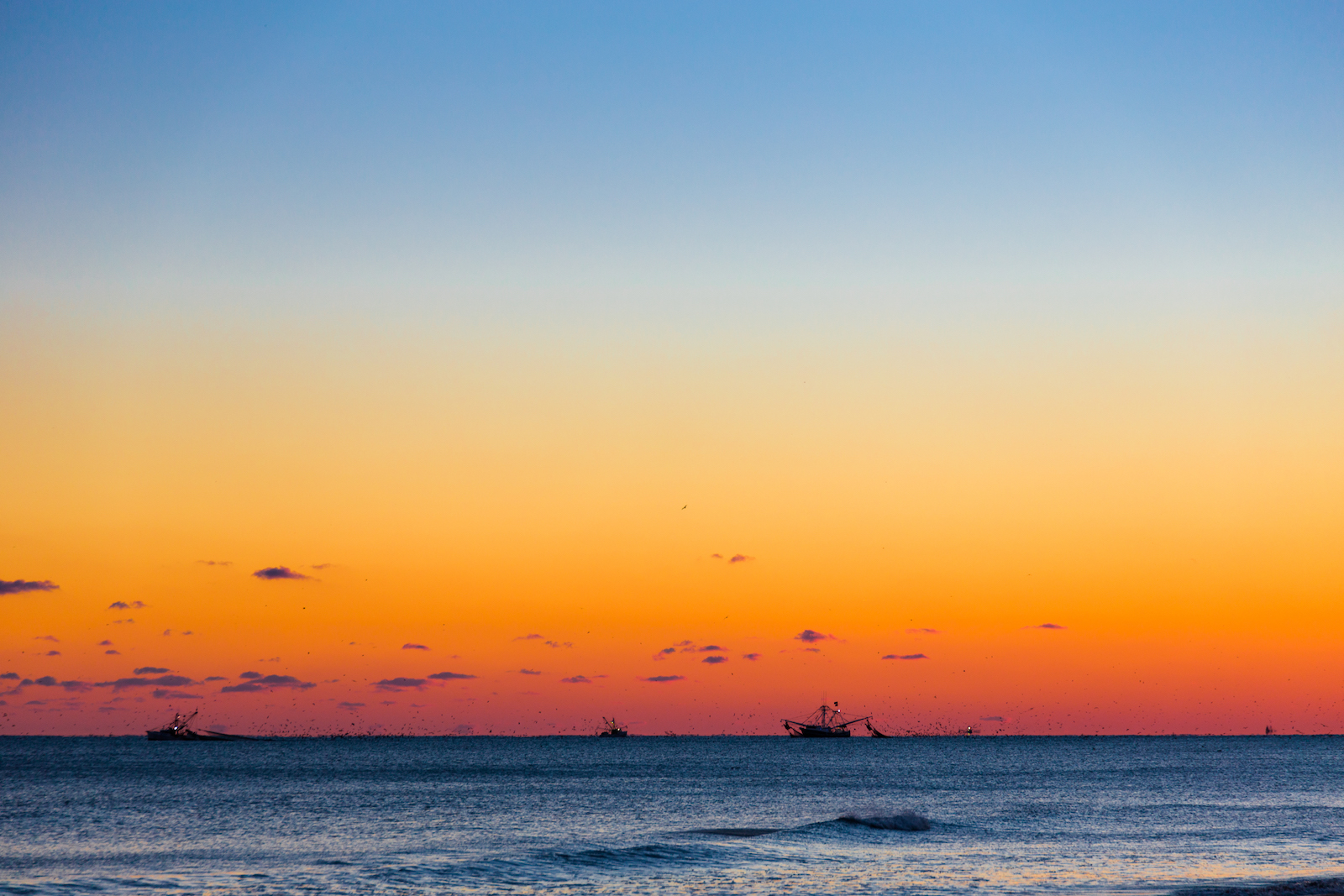 Because it’s warmer now than what it was back in the ’80s, the shrimp are hanging around longer.

Shrimp Trawler Inshore, Off of Frisco, Dare County. “I remember as a child growing up working on the water how cold it was back then as opposed to now. I remember Sleepy Creek being froze over so much I couldn’t get my boat out to go fishing. Marshallberg Harbor was froze two or three days in a row, so much the ice was too thick to run your boat through it to get out to go fishing . . . Well now, I think last year, I don’t remember any ice hardly at all. It’s just warmed up. The same reason that made South Carolina great [for shrimping] back then was it was 6 or 7 degrees warmer [than North Carolina], plus you had deeper water. The deeper water meant that the cold took longer to penetrate down to the bottom to run the shrimp up. Well, in Core Sound, you’ve got shallower water . . . so the shrimp leave there on the first few cold snaps. They get out of there. But because it’s warmer now than what it was back in the ’80s, the shrimp are hanging around longer . . . the shrimp are moving further north.” —Larry Kellum, Commercial Fisherman, Otway 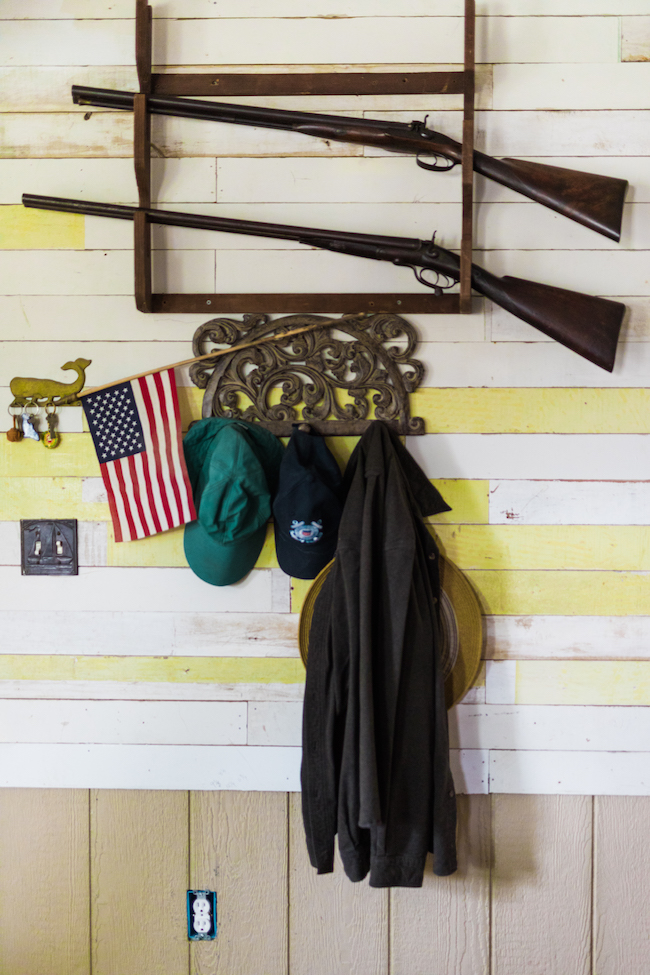 Back to the Basics, Hatteras Village, Dare County. Hurricane Matthew brought 16 inches of water into the first floor of Dwight Burrus’s home. Raised in Hatteras Village, Dwight remembers the days when homes lacked insulation and walls were made of wood, not sheetrock. To safeguard against future damage, he’s drawing from old island construction methods to complete repairs. He’s also replacing the first 32 inches (twice the amount of flooding from Matthews) of sheetrock with waterproof materials, and raising the electrical wiring. 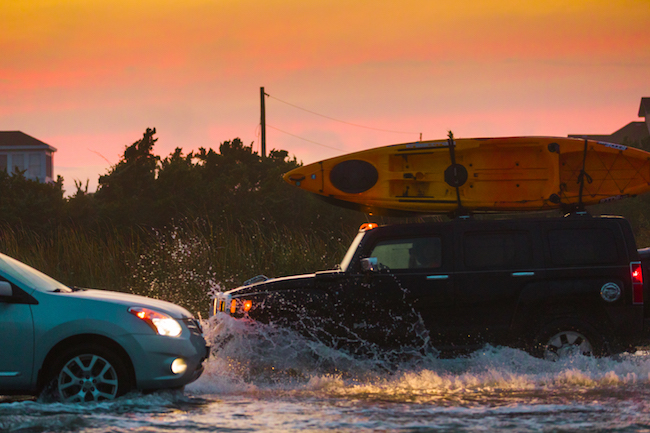 Wake Zone, Avon, Hatteras Island, Dare County. Hazardous weather events can affect coastal North Carolina even when they are hundreds of miles away. This photo was taken in Avon when Hurricane José was about 200 miles east of Cape Hatteras. The offshore storm removed parts of the dune line on Hatteras Island and eventually the water became so deep on Highway 12 that the roadway was temporarily closed and impassable. 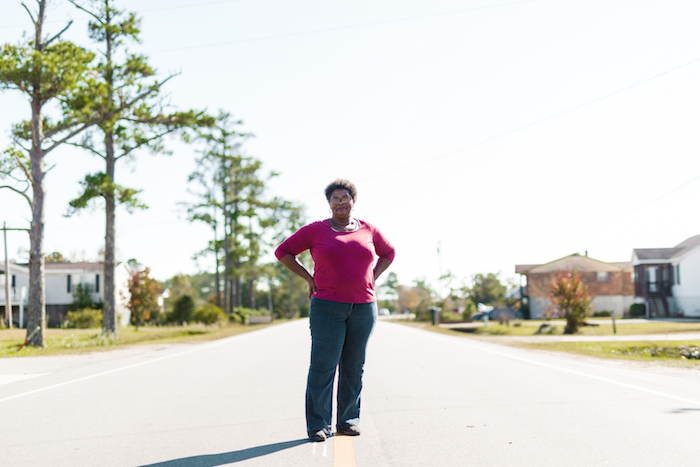 I know God said He was not going to flood the earth no more, and that’s true, but the floods is still coming

Patricia Smith, North River & Laurel Road, Carteret County. “I told them, I said, ‘Well, in 10 to 20 years,’ I said, ‘I might not be here to see it.’ I said, ‘North River and Laurel Road’s going to be gone.’ And they keep saying, ‘Well, how you know?’ I say, ‘Well, I just got that instinct, you know, that it’s gonna be gone. It’s gonna be under water here.’ And they say, ‘You act like you God or something,’ and I say, ‘No, you sit and watch the weather, you listen at the weather, you look up at the sky, you look down on the ground.’ And I say, ‘Everything’s changing. It’s changing.’ I say, ‘I know God said He was not going to flood the earth no more, and that’s true, but the floods is still coming.’” —Patricia Smith, Laurel Road 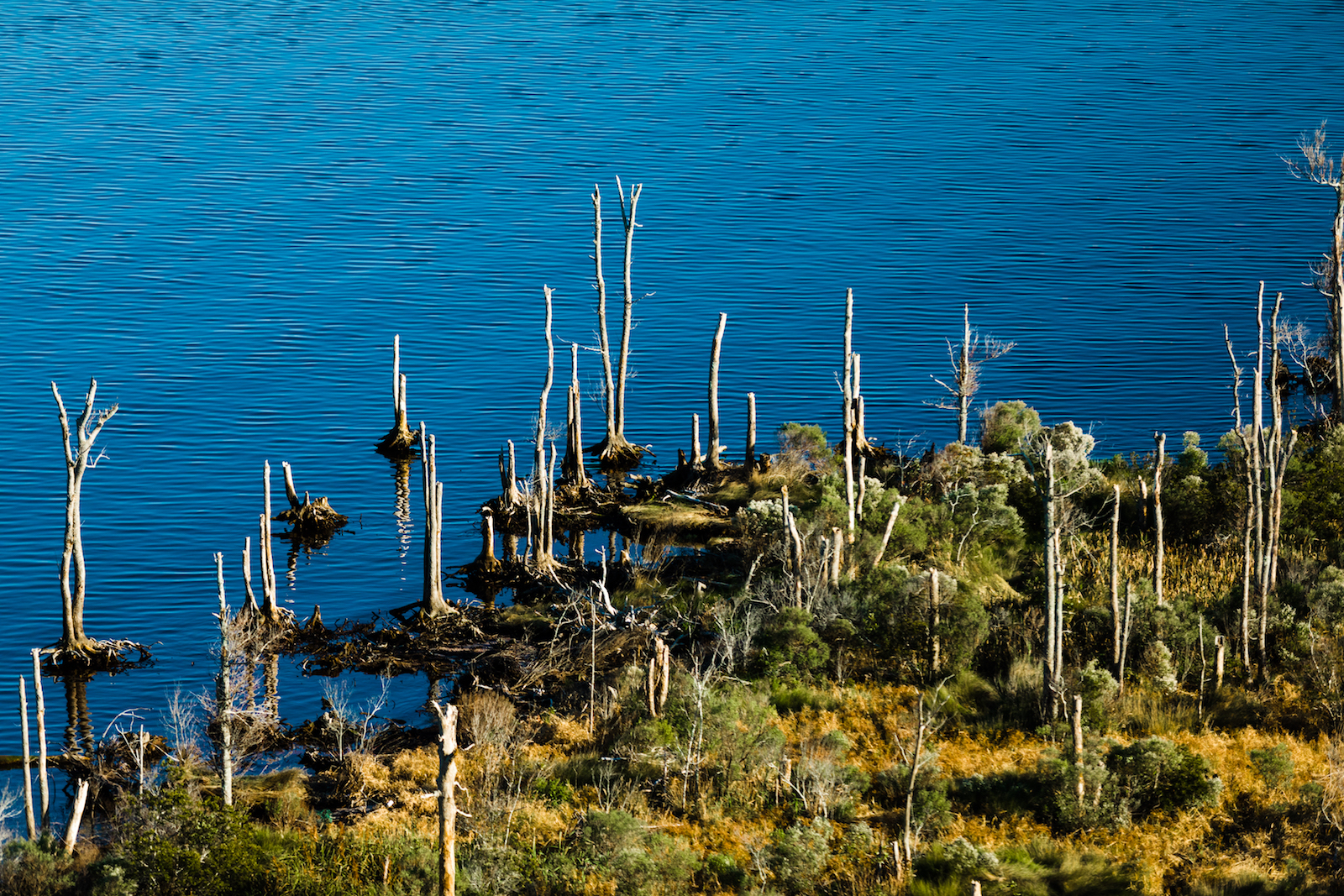 You can still see the snags out there where pine trees were on it.

Eroding Shoreline, Engelhard, Hyde County. “If it wasn’t for the dike in here, and there’s probably 11,000 acres inside that dike, I dare say of that 11,00 acres you wouldn’t have but 500 or 600 hundred of it that would be farmable now. Twenty years ago, I coon hunted back of this dike . . . some two hundred yards out, at least. Beautiful woods. Dead marshland now. You can still see the snags out there where pine trees were on it.” —J. W. Spencer, Swan Quarter

RISING is made possible by The Community Collaborative Research Grant, a program of North Carolina Sea Grant in partnership with the William R. Kenan Jr. Institute for Engineering, Technology and Science. With additional support from: The Center for the Study of the American South, Southern Cultures, the Coastal Resilience Center, Food for All, and the Department of American Studies at UNC.

Barbara Garrity-Blake is a creative and innovative cultural anthropologist. For more than twenty-five years, she has been a leader in collecting, preserving, promoting, and writing about North Carolina coastal folk traditions, particularly the state’s coastal fishing villages. She is an instructor at Duke Marine Lab.

Baxter Miller is a photographer and the principal investigator and photographer for RISING. Born, bred, and based in eastern North Carolina, she strives to document and understand the people, traditions, places, and challenges facing her home. With an interest in digital storytelling and its impacts, she is a creative consultant and content creator/strategist who guides narrative-rooted businesses in telling their stories.

Ryan Stancil is a content creator, community builder, and communications consultant. He is passionate about the intersection of culture, rural economies, environment, and food, particularly in eastern North Carolina, and is an advocate for responsible and sustainable coastal management and its natural and cultural resources. In addition to conducting oral histories, he is the project coordinator for RISING.