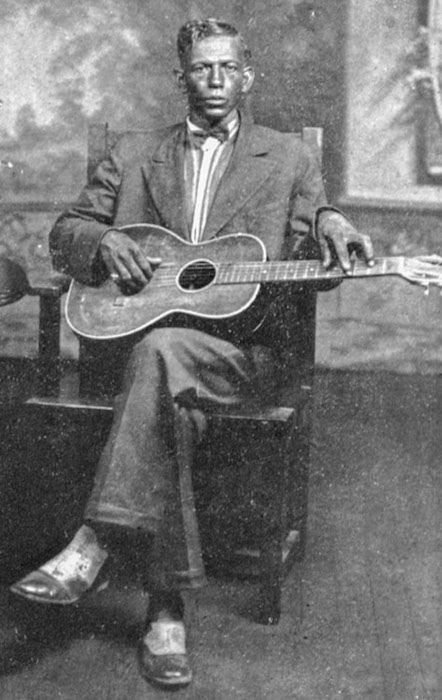 From the Collection of John Tefteller and Blues Images, www.bluesimages.com, used with permission.

"Native Hawaiian guitarists, who slid metal bars over their strings to create sweeping glissando sounds, inundated the South in the first decades of the twentieth century."

Although the work of eliminating blues myths is a hard row to hoe, scholars have successfully uprooted a few, including the persistent belief that into the early twentieth century, Mississippi Delta blues musicians nurtured their musical traditions in isolation from the sounds of the modern world. We know that they sought out the latest hits from Tin Pan Alley, enjoyed the raucous and worldly, cosmopolitan performances of traveling vaudeville singers, and often mimicked the singing (or, in the case of Jimmie Rodgers, the yodeling) of the biggest recording artists of their day. Robert Johnson now seems much less of a devil-conjuring mystic than a bright, observant professional guitarist who readily assimilated a huge body of riffs borrowed from all the records he could get his hands on. Indeed, our understanding of music-making in the early-twentieth-century South has changed dramatically in recent years.