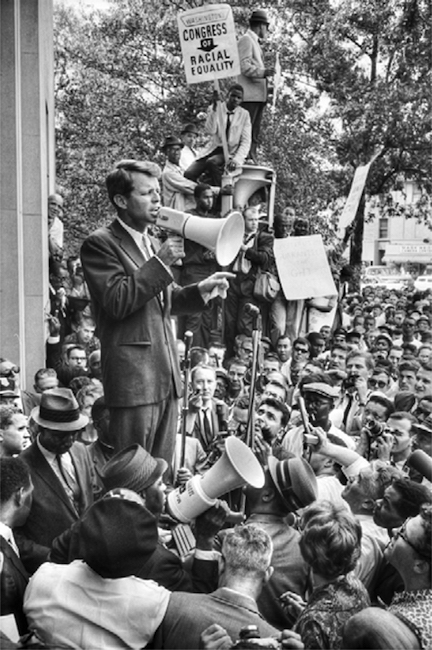 Bobby Kennedy, speaking before a crowd and a “Congress of Racial Equality” sign at the Justice Department in Washington, D.C., 1963, courtesy of the U.S. News & World Report Magazine Photograph Collection at the Library of Congress.

"Fannie Lou Hamer, one of the genuine heroes of the Civil Rights Movement, one said, 'So this ain't just Mississippi's problem. It's America's problem.'"

The Civil Rights Movement of the 1950s and 1960s transformed the United States. After decades of struggle and sacrifice, it prodded the federal government to ban racial discrimination in public facilities, to pass fair housing laws after years of de facto and de jure exclusion, and to make every citizen’s right to vote a reality. The Movement liberalized American political culture, birthed a protest movement by women, spawned antiwar and free-speech activism, triggered a flurry of protests by the deaf, trade unionists, and others, and profoundly influenced the content and trajectory of democratic ideals and practice. Indeed, the very language Americans use to understand our national identity and the country’s history—what we now mean by such concepts as freedom, justice, and equality, and how and when we use those and similar words—has been shaped by the black freedom struggle. That the fight for civil rights did not accomplish all that some had hoped—de facto housing segregation, for example, is alive and well, and African Americans tend to be impoverished, as well as unemployed, at rates twice or more greater than those of whites—in no way diminishes the righteousness of its travails, the magnitude of its victories, or the potency of its continuing legacy.