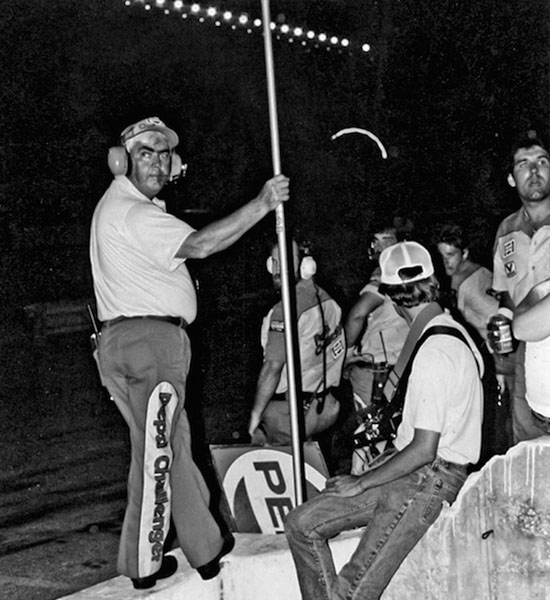 Junior Johnson (left) as crew chief and car owner at the Nashville 420 in 1983, photographed by Billferguson, courtesy of a Creative Commons Attribution 3.0 Unported license.

"The production and sale of illicit music, like liquor, has been part of what the late historian Jack Temple Kirby dubbed the 'countercultural South'—an undercurrent of defiance to both the government and big business that persisted throughout the twentieth century."

The hillbilly with his jug of moonshine (marked XXX) is a familiar, if problematic caricature of southern life. This figure has endured in part because it embodies so many tropes about the South, both good and bad. There is criminality, ill health, and poverty; the moonshiner engages in unlawful behavior to concoct a beverage of dubious safety, because he is too poor to drink anything but his own hooch. On the positive side, though, one finds more favorable qualities: a spirited resistance to authority, for instance, not unlike the image of the South exemplified by the Duke boys outsmarting Boss Hogg on the popular television series The Dukes of Hazzard. The moonshiner is independent, making a product without state sanction and despite his evident lack of capital. He is masculine, because he is strong enough to stomach white lightning. Bootlegging is even bound up in the mythology of an iconic southern industry and pastime, NASCAR racing, as the sport originated among southerners who souped up their cars to move illicit booze and evade law enforcement. According to historian Mark D. Howell, these bootleggers soon became “the subjects of regional folklore,” whose stories embodied themes of “self-reliance and personal economic survival.”