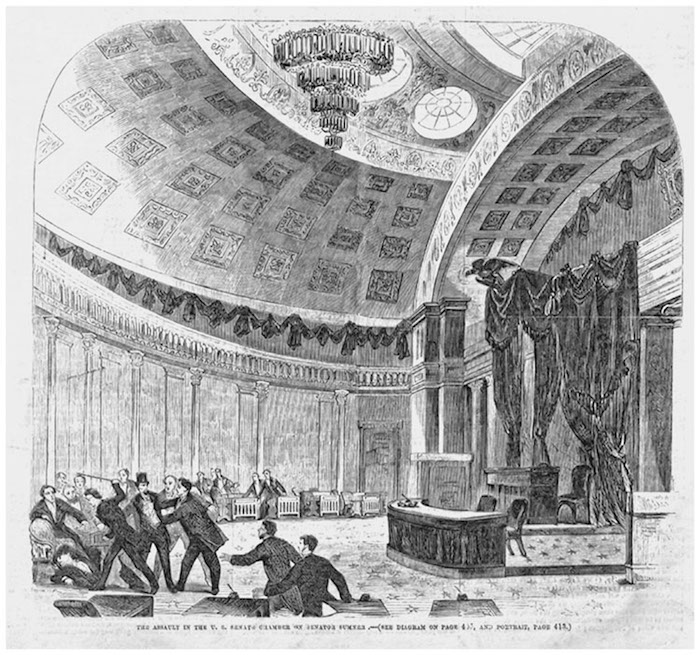 Detail of the cover of Frank Leslie’s Illustrated Newspaper, June 7, 1856, depicting the caning of Charles Sumner.

"He had acted so precipitously so often in affairs of honor, and it had won him only paternal disapproval and a cane, a limp, and ignominy in Mexico. Now he had righted the ship; he had become a man of greater moderation and restraint."

Looking out across the scorched strand from atop one of the few remaining horses, the regimental surgeon scanned the marching throng and noticed a “curious drag” in the left leg of Captain Preston S. Brooks. “It was so striking it occupied my attention some time,” the surgeon recalled, and he pulled alongside Brooks to ask if he was all right. None of the soldiers were doing well; all were thirsty; all were broiling; many were already succumbing to the diseases that would kill them during the Mexican campaign or shortly thereafter. Only two days in country, the regimental commander was on his back, being borne along on a litter. The surgeon himself would have his health so wrecked he would survive the war by only a few months. But Brooks looked worse than most—sweating profusely and grimacing with each labored step. “I was satisfied it was a serious matter,” the surgeon recalled, “& advised him to march no further & to borrow a horse, or to get into a wagon, for I apprehended if he continued to walk he might lose the use of his lower limb from paralysis. I then told him I feared he would not be able to continue in the service & that he certainly would not be able to march through it.”1 Despite this, Brooks refused any aid and continued his labored march. By God, he would make it to Alvarado.