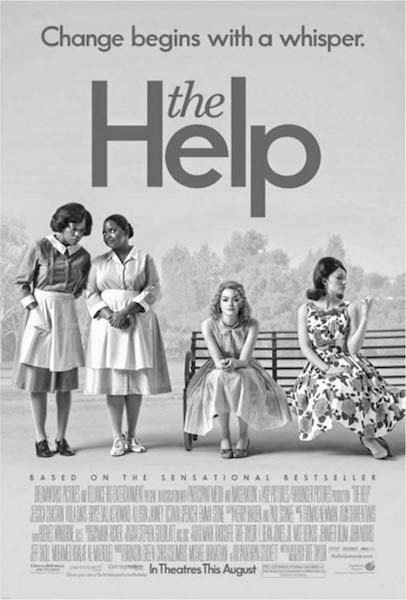 The reception of Kathryn Stockett’s The Help (2009) calls to mind the reception of two other novels about race relations by southern white writers: Margaret Mitchell’s Gone With the Wind (1936) and William Styron’s The Confessions of Nat Turner (1967). Like Gone With the Wind, The Help has been a pop culture phenomenon—prominent in bookstores and box offices, and the “darling of book clubs everywhere.” In January 2012 when I asked students in my Women in Modern Literature class what was the best book they had recently read by a woman, most named either The Help or The Hunger Games. And not surprisingly. The Help was number one on the New York Times bestseller list for over a year after its publication in 2009. Similarly, the movie held the number one spot in box offices for several weeks after it was released in August 2011, thereby propelling the trade paperback back up the New York Times bestseller list, where it remained a year later. By the time the movie was released, the book had sold 3 million copies, spent more than two years on the New York Times bestseller list, and been published in 35 countries and translated into three languages. Three months after the film’s release, it had grossed $160 million at the box office. Both novel and film have been discussed in likely television venues, such as The View, as well as in unlikely ones, such as Hardball (Chris Matthews loved it). Add to that, DVD purchases, Netflix rentals, and e-books (one of the most downloaded e-books of all time), and readership and viewership of The Help may someday surpass that of Gone With the Wind. Readers from coast to coast made it the most checked-out book in the country for 2010 and 2011. Both novel and film were nominated for awards. The novel won prizes at home (BookExpo America’s Indies Choice Award, the Southern Independent Booksellers Alliance Award for Fiction, the state of Georgia’s Townsend Prize) and abroad (the UK’s Orange Prize, South Africa’s Boeke Prize, and the International impac Dublin Literary Award). And director Tate Taylor received the Writers Guild of America, West’s Paul Selvin Award for his adapted screenplay. While The Help did not win the Oscar for best picture or Viola Davis for best actress, Octavia Spencer did win for best supporting actress, and the film “walked away with the most kudos at the 43rdnaacp Image Awards, taking home the top prize for outstanding motion picture and nabbing actress and supporting actress honors for Davis and Spencer.”