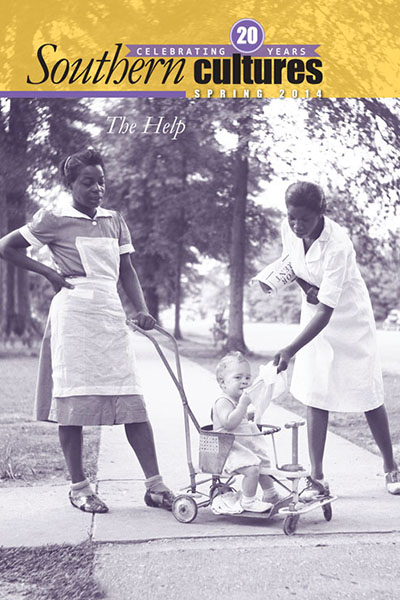 A special issue on The Help.

"Lauded for her endless gifts and selfless generosity, Mammy is summoned from the kitchen to refute the critics of southern race relations; cruelly circumscribed and taken for granted, she silently confirms them all."

"Culture products - literary texts, television series, films, music, theatre, etc. - that look back on the Movement tell us at least as much about how contemporary culture views its own racial politics as they do about the past they purport to represent, often conveying the fantasy that the United States has triumphed over and transcended its racial past."

“A Stake in the Story”: Kathryn Stockett’s The Help, Ellen Douglas’s Can’t Quit You, Baby, and the Politics of Southern Storytelling

"Like The Help, Can't Quit You, Baby focuses on the layers of habit, antipathy, resentment, suspicion, attachment, and silence linking white employer and black employee—but in ways that are far more unsettling."

“We Ain’t Doin’ Civil Rights”: The Life and Times of a Genre, as Told in The Help

"Perhaps because the modern Civil Rights Movement and television news came of age together, the younger medium was destined to become an iconographic feature of the civil rights genre."

Every Child Left Behind: The Many Invisible Children in The Help

"The question arises: wouldn't the mammy characters be rendered more believeable in their altruism if it extended beyond white children to all children?"

"Pleasure and anger are dependent on one another for heightened authenticity. Discussing The Help with delight and outrage seems just the right action."

Twenty-Five Years Out from Telling Memories: Conversations Between Mary Yelling and Susan Tucker

"I am glad she used what the women told us and made something different from it. She made people listen. I know it is fiction, and I know not everyone liked it, but she made people not forget. What more can you want?"

Prayer for My Children